Bombers’ football falls to Bengals for its fourth straight loss 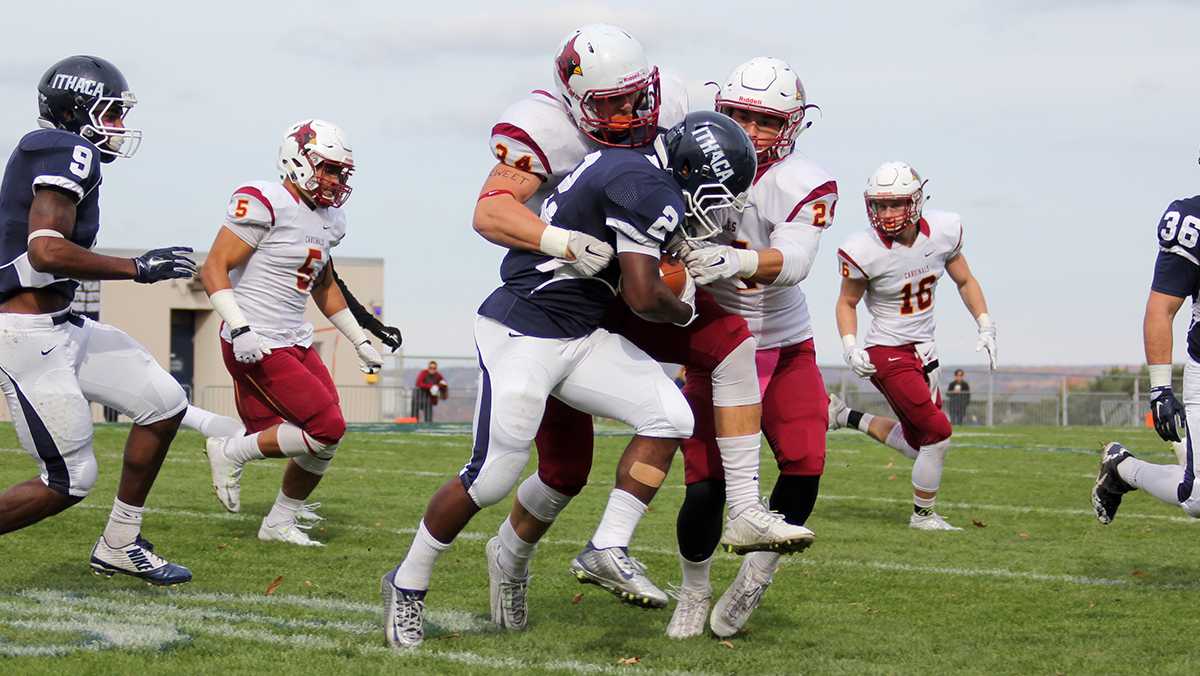 The football team went into its Nov. 7 matchup against Buffalo State University optimistic despite injuries that have plagued the 2015 season. Though a stout Bombers defense contained the Bengals throughout the game, it was not enough as the team fell to Buffalo State by a final score of 7–3 in Buffalo, New York. This marks the first time since 1957 that the Bombers have lost four consecutive games.

The defense of old seemed to be rejuvenated and allowed just seven points on the afternoon. However, the Blue and Gold were out-beaten by a Bengals defense that is ranked the best in the Empire 8 conference, allowing just over 18 points per game. The Bombers were in the red zone eight times on the afternoon, but were unable to convert on any big plays.

The Blue and Gold received the opening kickoff and returned it just shy of midfield. Once the Bombers hit the field, it was senior quarterback John D’Onofrio who started under center in relief of injured junior Wolfgang Shafer. This marked his first start as quarterback in his four-year career on South Hill.

Toward the end of the first quarter, sophomore running back Dale Stewart ran for a 70-yard touchdown, but it was called back due to a holding penalty by one of the offensive lineman.

Halfway into the second quarter, senior kicker Max Rottenecker came on for a 45-yard field goal, but there was a high snap to Shafer and the ball rolled to the 50-yard line, where Shafer fell on the ball, but the Bengals took over.

The next time that the Bombers had the ball, they had a 20-yard screen throw to sophomore fullback Jack Yule in what turned out to be the biggest play of the game. It led to a 23-yard field goal attempt by Rottenecker, who put the Blue and Gold on top 3–0 with 10 seconds remaining in the first half.

In the third quarter, it was a defensive grind between the two teams as neither team scored, nor did either play well or get into the red zone.

Stewart picked up 49 yards for the Bengals, but it was called back because of another holding penalty. This was the sixth holding penalty on Buffalo that set them back.

During the fourth quarter, the intensity picked up in the game. Early on, junior wide receiver Madison Wesolowski had a run called back on him as he would have scored for a touchdown that would have put the Bengals ahead, except there was a false start. On the following play, senior quarterback Dan Serignese connected with sophomore wide receiver Had Bryant for an 11-yard touchdown pass, thus putting the Bengals ahead of the Bombers 7–3 after placekicker junior kicker Marc Montana connected on the extra point.

In the next possession for the Bombers, the offense did not have to do all that much to get great field position. The Bengals had two personal foul penalties in a row, and it allowed the Blue and Gold to get into the opposing field position.

From there on, the Bombers were able to get inside of the 10-yard line, but they were unable to get into the end zone on a fourth and goal. D’Onofrio threw an interception to sophomore defensive back Ish Height, and the Bengals took over from the 20-yard line.

On the very next play, Stewart put the ball on the ground and the Bombers were able to recover setting themselves up with great field position and needing a touchdown to put them ahead.

Once again, the Bombers were again able to get inside of the 10-yard line, but were unable to pull through with a touchdown as D’Onofrio threw a ball on fourth-and-seven to junior wide receiver Andrew Tabbert, who caught the ball but was ruled out of bounds, thus turning the ball over on downs for the second consecutive possession.

In the remaining five minutes, the Bengals were able to run out the clock to pull out the win and hand the Bombers an unprecedented fourth consecutive loss.

In D’Onofrio’s first career start, he went 8–21 for 88 yards as the Bombers struggled to get anything going through the air. However, after having a combined one total rushing yard in the past two games, the Bombers had over 100 yards on the ground in Buffalo, including 89 yards on 22 carries from sophomore running back Tristan Brown.

Next week, the Bombers host rival SUNY Cortland in the 57th annual Cortaca Jug bout. The Blue and Gold will look to play spoilers to the Red Dragons as Cortland currently sits atop of the Empire 8 conference and is looking to make the NCAA Tournament. Sitting with an overall record of 4–5, this is the Bombers’ first time being under .500 since 2011.