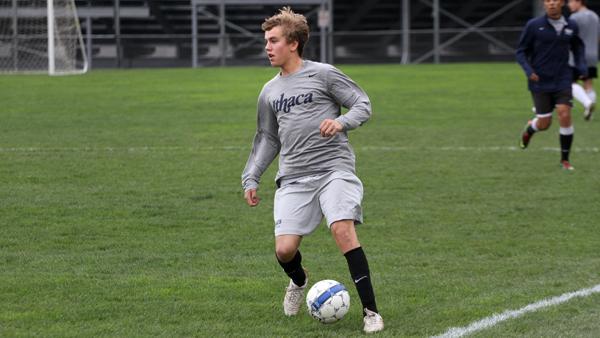 The men’s soccer team has won more than four games in a single season for the first time since 2009. However, the team can point mostly to its strong defense for its improved winning percentage, because the offense is averaging only one goal per game, a rate that ranks second to last overall in the Empire 8 Conference.

Sophomore midfielder Tim Goldman said one of the reasons the team has not been able to convert a lot of goals this season is because of lack of crosses in the offensive third.

“We do too much dribbling on the field, and then we lose the ball and don’t get dangerous enough,” Goldman said. “What we’ve been working on is a lot of crosses in practice and getting more dangerous.”

The Bombers’ lack of firepower was most evident in the team’s 0-0 draw against Scranton University on Sept. 25. In that game, the South Hill squad was unable to create many scoring threats until the last few minutes of overtime. Before the last 10 minutes of the game, the Royals outshot the Blue and Gold in each period.

The Bombers are currently ranked in second to last place in the Empire 8 for overall goals this season with 13 total. The team has scored five of those goals in conference play, ranking them sixth in the Empire 8. Goldman said another factor contributing to the lack of scoring is the team’s inability to get players within 18 feet of the goal.

“We get crosses in, but maybe I’m the only person in the box, but we’ve been working on getting four or five people in the box, and that puts pressure on the defense, and that’s going to allow us to score,” Goldman said.

Head Coach Andy Byrne said his focus at the beginning of the season was developing possession and play buildup to create scoring opportunities. The Bombers have improved this aspect of their game by increasing the number of shots they take per game.

In the South Hill squad’s opening weekend, the team took a total of 19 shots in two games with nine on target. In their last two games — against Elmira College and Hamilton College — the Bombers had 25 shots total and 13 shots on goal. Byrne said the next step is converting those chances.

“We’ve been getting better at creating chances,” Byrne said. “We just haven’t been able to find the consistency in terms of finishing them off. From my standpoint, the biggest concern is creating chances, and then it’s the players’ responsibility to finish.”

The Blue and Gold have already seen starters like freshman left back Joey Dobbins and sophomore midfielder A.J. Wolfanger miss games because of injuries. Byrne said losing players that have contributed offensively may have caused a setback, but the team has to make adjustments accordingly.

“We have a few injuries right now that’s impacting us, but that’s the way it is,” Byrne said. “You just have to deal with it.”

Sophomore midfielder Casey Williamson, who has recently been playing left back to replace Dobbins, said Byrne has implemented different types of finishing drills into practice.

“We’ve been working on where to run, kind of filling those spaces to finish the ball,” Williamson said. “We’ve been doing a bunch of finishing, which is also helping the goalies. Other than that it’s a lot of game play.”

As the Bombers strive to remain in position to qualify for the Empire 8 tournament, senior captain Dan Shirley said converting more often on goal-scoring opportunities will be key during the stretch run.

“Our number one thing we’ve got to address is finishing, because going forward those chances aren’t going to come as often as they have these past games,” Shirley said. “We’re going to be working on that until the end of the season. That’s going to be the topic of every practice from here on out.”