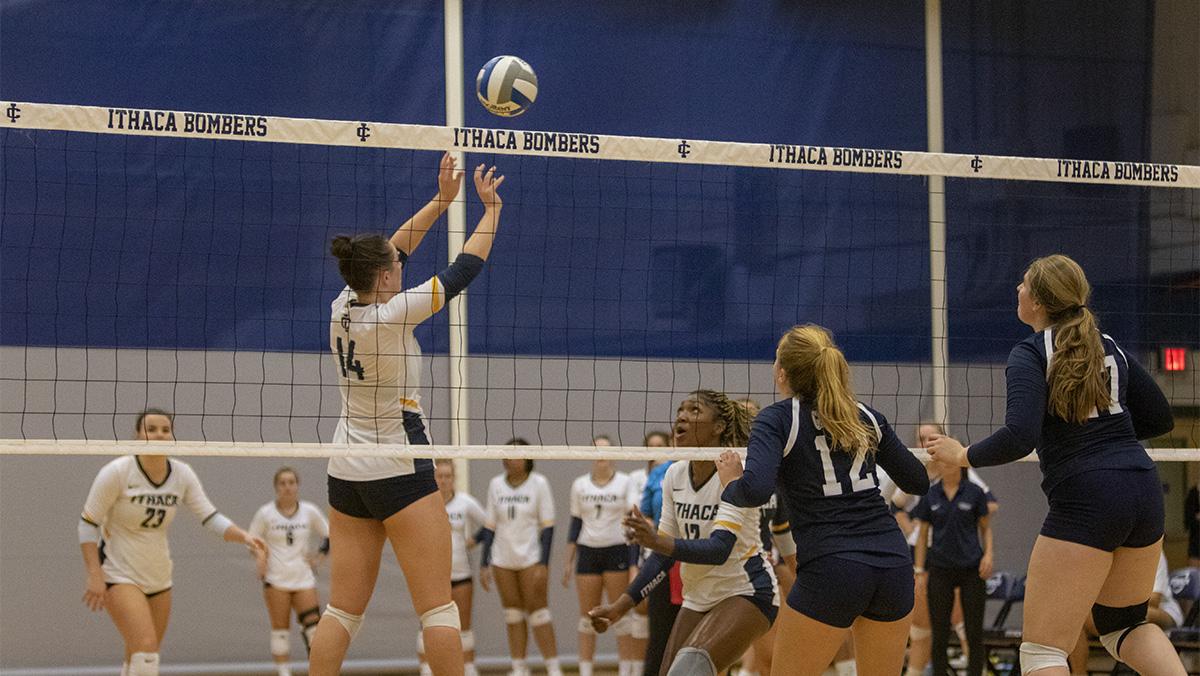 The Ithaca College volleyball team had highs and lows Saturday, Sept. 3, winning a five-set match over the SUNY Geneseo Knights before falling in the second game in three sets to the No. 19 Gustavus Adolphus College Gusties.

Just like in the season opener, sophomore outside Faith Sabatier was the star of the show in the first match. She notched 20 kills and 24.5 points, both of which would have been personal bests if not for her stellar performance Friday. First-year setter Maddie Cox, fresh off a debut performance with 40 assists, tacked on 48 more against Geneseo, giving her the two highest single game assist totals in the Liberty League this season already.

Cox said she is enjoying the young season so far, and she thinks the team has the energy needed to keep competing with the best. No matter how well she or the team is playing, she said they have each other’s backs.

“Everyone on this team is genuinely amazing,” Cox said. “And I’m really grateful for the opportunity to play. … Playing with all these girls is definitely a different experience than I’ve ever had before.”

Despite a good first set where Cox lodged nine assists and Sabatier threw down six kills, the Bombers never really looked like they got into a groove and dropped the set 25–15. The second set started better with the team jumping out to a 16–8 lead, but the Knights fought back to tie it at 23. Both teams would stay knotted up, but the Bombers came out on top with a 27–25 win.

Ithaca College took another nice lead in the third set, 15–8, but once again could not hold onto it, letting Geneseo tie it at 17 and losing the set 25–22. The fourth set was a must-win for the Bombers, and it looked like it might not happen. Down 17–15, the college was not looking at its best, but it rallied to take 10 of the final 14 points, winning the set 25–21.

The team carried over the energy from the end of the fourth set, playing dominant volleyball in the fifth, and taking down Geneseo 15–6 for the 3–2 victory.

The Bombers only got a few hours rest before taking on the No. 19 team in the country, Gustavus Adolphus College, and although the team lost in straight sets, it was closer than the final scorecard would indicate.

The Bombers were in control of most of the first set, at one point holding a 19–13 lead over the Gusties. But Gustavus showed why it is ranked so highly and won the next six points. The Bombers kept it close but ended up losing the set 25–23.

Ithaca College again kept it close in the second set but could not manage to win the set, dropping it 25–21. Part of the problem for the college was that no player took a clear leading role offensively. Sabatier had just six kills in the first two sets, while junior outside hitter Alex Montgomery had only four. Sophomore middle blocker Aleka Darko led the team in the category with eight, but it was still noticeably less than Sabatier’s 11 in the first two sets of the match against Geneseo.

Following two close sets, the energy seemed to leave the Bombers’ side. Though the final score was 25–18 Gusties, the Bombers won three of the last four points to make the score look closer than it was. Neither Darko nor Sabatier notched another kill, though Cox did extend her Liberty League lead in assists by adding 30 more in the three-set loss.The Bombers now have a week off before they travel to Huntingdon, Pennsylvania, for three games at the Asics Invitational Sept. 9 and 10. They will face No. 4 ranked Juniata College at 7 p.m. Sept. 9.