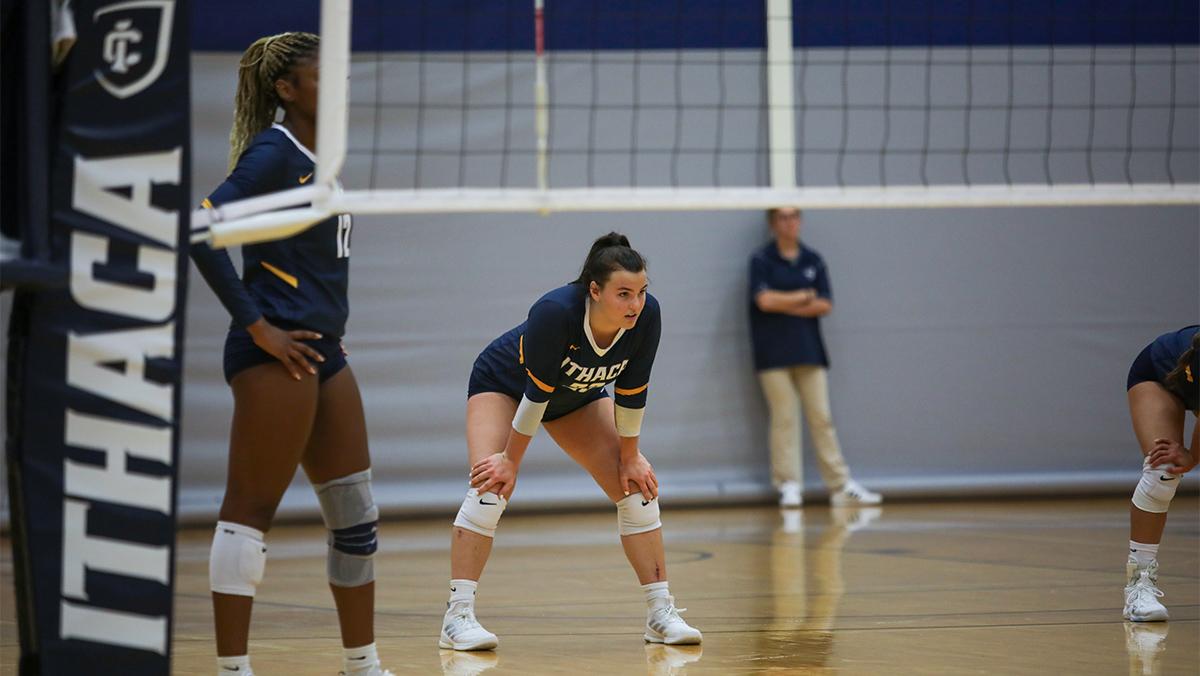 Rayahna Tryka/The Ithacan
From left, Sophomore Alexa Darko and Faith Sabatier both led the team in kills, with 23 and 5 respectively, in the team's contest against Swarthmore College on Sept. 2
By Aidan Charde — Sports Editor
Published: September 4, 2022

In a tumultuous game that took until the final set to be decided, the Ithaca College volleyball team came out on top 3–2 in the Ben Light Gymnasium to open the season on a high note.

Sophomore outside hitter Faith Sabatier was dominant for the Bombers, notching career-highs in kills and points, with 23 and 25, respectively. First-year setter Maddie Cox also made herself known in her debut match with 40 assists, nearly double the second-best mark on either team of 23.

It took a while for either team to gain any traction in the game. The Swarthmore College Garnet took the first set 25–17, but the Bombers fought back to take the second set in a close 25–18. The third set was never close, with the Bombers taking it 25–10. Sabatier tallied 18 kills in the first three sets, shattering her previous career-high of 14, which took her a full five sets in October 2021.

Following the dominant third set, the South Hill squad came out firing to take a 5–0 lead, but the Garnet outscored the Bombers 25–14 the rest of the way to force a winner-take-all fifth set. The team seemed to lack the energy it had in the third set, and it showed on the scorecard — lodging a dismal .061 hit percentage and being aced by the Garnet four times.

After a quiet fourth set where Sabatier attacked 10 times and earned no kills or points, she came out firing in the final set, hitting a massive spike to give the Bombers a 2–1 lead. The team then jumped ahead 10–5 before Swarthmore called a timeout, which shifted the momentum back to the Garnet, who came back to be down by just one.

But on the play that looked like it tied the game at 12, the referees ruled that a spike from junior outside hitter Alex Montgomery was tipped by a Swarthmore defender before sailing far out of bounds. Instead of being tied at 12, the Bombers took a 13–11 lead and held tight, winning the final set 15–11.

Head coach Johan Dulfer said he was proud of the way his team played in its first regular season match of the year, despite how the fourth set went.

Dulfer said he thinks the team had some great moments, but also they certainly have some things to improve on. He said the players will know that — even Sabatier, who had the best game of her young career so far.

“I think if you ask Faith, she’d probably be critical of parts of the game that didn’t go so well, because she always wants to be better, and that’s what I appreciate about my team,” Dulfer said. “Five sets takes a lot out of you. Nearly two and a half hours of volleyball, that’s tough. But they played pretty well at the end, and that’s all you can ask for in an early match.”

The Bombers will continue the Bomber Invitational at 1 p.m. Saturday, Sept. 3, with a match against SUNY Geneseo.