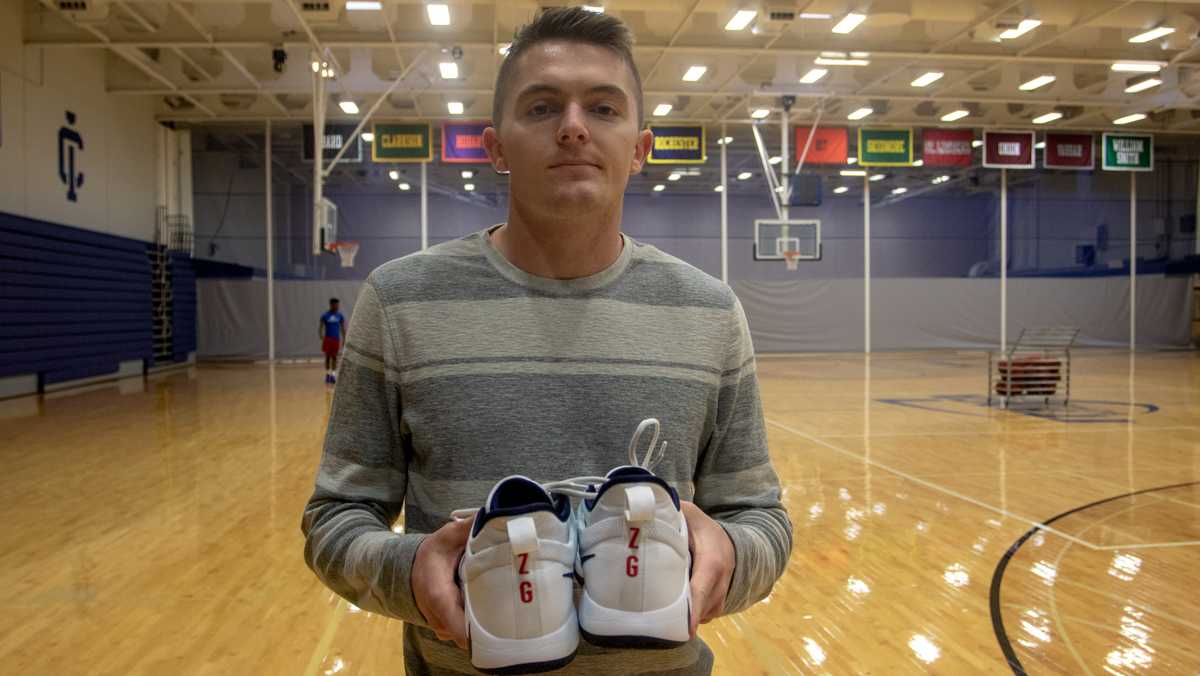 BRIANNA MOTTEY/THE ITHACAN
Senior Matt Flood holds up his game sneakers, which have his best friend Zac Garcia’s initials on them to honor him during Flood’s senior season with the Bombers. Garcia died in a car accident Sept. 9.
By Anna Harris — Staff Writer
Published: November 27, 2018

Senior guard Matt Flood is currently in his fourth season playing for the Ithaca College men’s basketball team, but this season has taken on a new meaning.

Flood’s best friend, Zac Garcia, died in a car accident Sept. 9. Flood said Garcia’s death impacted him greatly, both as a player and a person.

“The whole situation was just really tough for me personally, just to go through that,” Flood said. “Sometimes it was like my mind was at home but my body was here.”

Garcia and Flood grew up together playing basketball, being on the same teams since they were little kids. Eventually, the two played on Cresskill High School’s varsity team, in Cresskill, New Jersey,  where Garcia was the point guard. After high school, Garcia attended the University of Maryland. This season, Flood is playing with Garcia’s initials written on his sneakers as a way to both remember and play for him.

“His competitive nature was second to none,” Flood said. “[It was] simply unmatched. … I try to match that fierce competitiveness he carried when I’m on the court.”

Over the past three seasons, Flood has been a key member of the men’s basketball team. Flood appeared in almost every game throughout his collegiate career, starting in 49 of the team’s 78 games.

Currently, Flood has scored 571 career points for the Blue and Gold. He has also tallied 103 assists.

After playing positions all over the court when he was younger, Flood found his place as a guard when he was 10 years old. Standing at 6 feet, 2 inches, Flood was tall for his age and was placed in the position by his coaches.

“When I started out, I loved shooting 3-pointers and being outside on the perimeter, so I kind of grew into the position,” Flood said.

Flood was a 1,000-point scorer and fifth in total career points at Cresskill, where he graduated from in 2015. Flood credits his then-coach, Mike Doto, as one of the biggest contributors to his success in basketball.

Recruited out of Cresskill by the Bombers’ head coach Jim Mullins, Flood became a part of the South Hill squad starting in the 2015–16 season.

“We really got what we expected when we recruited Matt, he was a really quality kid,” Mullins said. “He’s one of the hardest workers I know, and we’re lucky to have him on the team.”

Flood said he is more focused on the team’s goals rather than his own. As one of the team’s captains, Flood plays a major role on the team as a leader.

“If I’m doing my job, both offensively and defensively, then I’m meeting my goals,” Flood said. “I just want to do whatever I can in my role on the team.”

Flood is hoping to get the team back to the Liberty League Conference Tournament and to make it to the NCAA Tournament in his final season as a Bomber. He said he is looking forward to his last season suiting up for the Blue and Gold. By playing with Garcia’s initials on his sneakers, Flood is hoping to end his collegiate career with the memory of Garcia always in his mind.

“Zac’s initials remind me to attack every game with his heart and hustle, put it all out on the floor for him,” Flood said. “Whatever we’re doing, I have to put my heart and soul into it, that’s what we would have done.”

Mullins, who has been Flood’s coach for the entirety of his collegiate career, has taken notice of Flood’s selflessness as a team player throughout the years. Mullins said he thinks Garcia’s passing has given Flood’s senior year a new meaning.

“He never lacked intensity, but I think he seems to be on a mission now,” Mullins said. “I think character is revealed when you’re dealing with a hardship, and Matt’s really was.”

Junior guard Riley Thompson, the team’s other captain, said Flood’s positive attitude has not deteriorated given the situation.

“I haven’t noticed too many changes in both his mannerisms and his play since the death,” Thompson said. “He still is the same kid in terms of unselfishness, dedication to the team and work ethic — which I would’ve expected from a kid of Matt’s character.”

Flood said that even though he and Garcia played basketball together, their friendship was more important off the court.

“Zac leaving us so soon has been a shock and whirlpool of emotions,” Flood said. “I will forever try my best to honor him wherever I go in life, including on the court this season. But it goes way further than that.”