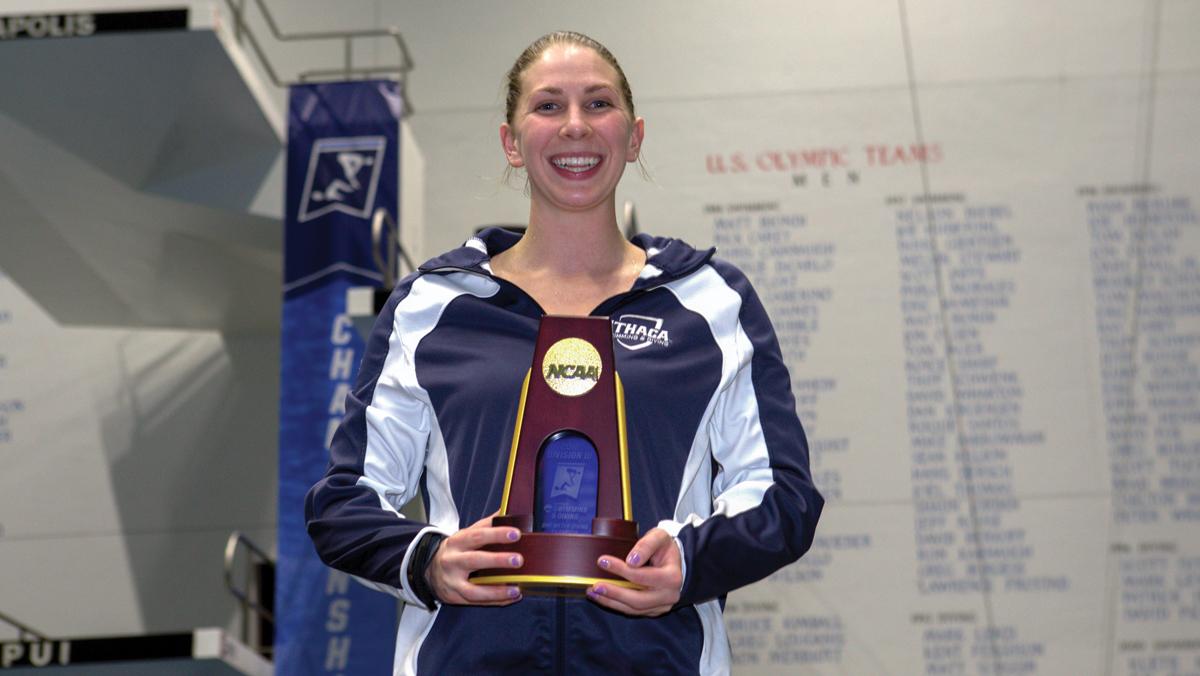 When graduate student Nickie Griesemer was in her freshman year at Ithaca College, she walked to the Athletics and Events Center to see the pool. Since she had been a diver on her high school team, she wanted to see what the pool looked like compared to her one from home.

As she was looking at the pool, then–graduate student Heather Markus saw her and said, “Are you lost?” When Griesemer said that she was just looking at the pool because she was a former diver, Markus took her to meet the diving coach at the time, Mike Wantuck.

Fast-forward five years and Griesemer is finishing out her collegiate diving career as a two-time national champion, winning the 1- and 3-meter dives at the 2018 NCAA Diving Championships.

Griesemer was a gymnast from the age of 2 until eighth grade, when a stress fracture in her wrist led her to stop competing. Once in high school, she tried out for her school’s diving team and said she loved it. She qualified for states her senior year and credits much of her early success to her being a former gymnast.

“It helped me tremendously,” Griesemer said. “I already had the experience flipping and the twisting, so it was a pretty good transition.”

During her freshman season at the college, Griesemer clinched the Empire 8 Conference Diver of the Year award. She went on to the NCAA Championships and earned All-American honors in both the 1-and 3-meter dives. At the meet, she finished 15th in the 1-meter dive and followed it up with a seventh-place finish in the 3-meter dive.

In her sophomore campaign, she was a conference and state champion in both the 1- and 3-meter dives. She finished eighth overall at the NCAA Championships in the 3-meter dive while earning Empire 8 Diver of the Year for a second consecutive season.

After finishing her sophomore season, Griesemer quit the team.

“It was a rough year for all of us, and we went through coaching changes,” Griesemer said. “[Anna Belson] and I went to nationals, but we did really poorly on the 1-meter, so I was going abroad junior year, and I was using that as a transition out, and I wasn’t going to come back to diving.”

Besides studying abroad in Barcelona during her junior year, Griesemer also said that during her senior year, she was starting the club Unite for Her, which is a club on campus that helps individuals with breast cancer. She said she wasn’t sure if she could handle diving and being the president of the club. However, when she was away from the team, she said, she realized how much she missed the other four divers: seniors Lindsey Suddaby, Alyssa Wishart, Katie Helly and Belson.

“I missed those four so much,” Griesemer said. “We are so close and are such good friends. We’re like family.”

During the 2017–18 this season, Griesemer said that balancing graduate school with diving was challenging at many points. She said that the first semester of graduate school is often the hardest for physical therapy students because they learn an entire semester’s worth of class content in a Block I course. She said she did not practice as regularly for most of Block I to focus on her academics.

“I knew going into this semester that it is when most PT students fail out of the program, and if I don’t pass my classes, I can’t dive anyway,” Griesemer said. “I was diving two to three times a week along with Saturdays and Sundays. I made it work where I would practice enough and not miss too much.” 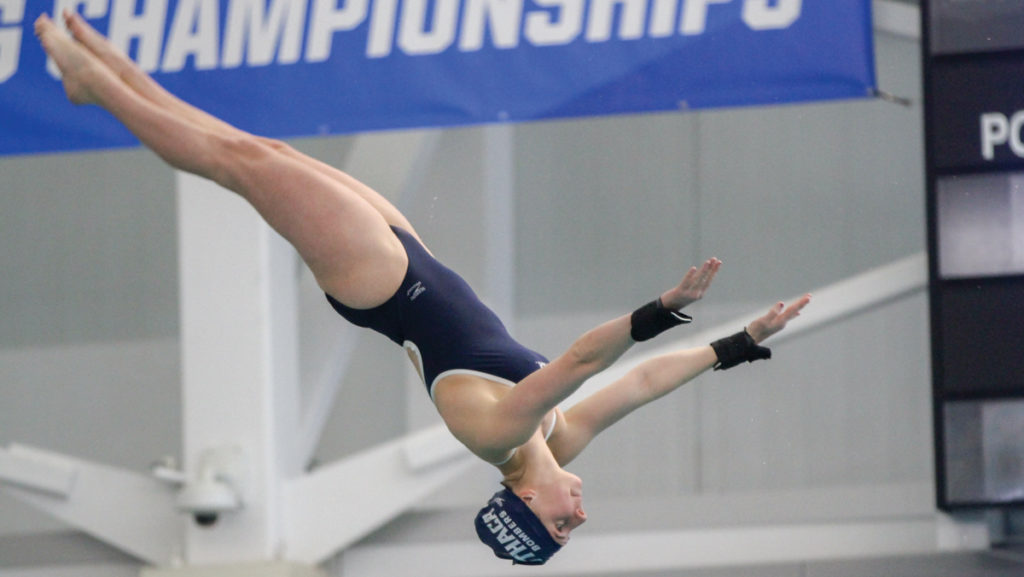 Griesemer competes at the Ithaca Invitational on Feb. 10 at the Athletics and Events Center.

Going into this season, Chris Griffin, head diving coach and assistant aquatics coordinator, said that it was an unspoken rule between him and Griesemer that she would win a national championship in the 3-meter dive after finishing as a runner-up her senior year. However, it came as a complete surprise when Griesemer finished on top of the 1-meter as well.

During the finals, Griesemer secured the first-place finish with a score of 467.60 points while edging out Centre College senior Sarah Hayhurst, who finished with 466.55 points.

Griesemer said that her initial reaction when she won the 1-meter was complete shock.

“I thought that I was a solid fourth place because I had been watching the other divers and they were all nailing their dives,” Griesemer said. “I had no idea it was going to happen at all, and it was really exciting.”

After her performance on March 22, Griesemer still had to compete in the 3-meter finals two days later. She finished with a score of 516.30, beating Blake Zhou, a sophomore from the Massachusetts Institute of Technology, by nearly eight points.

Suddaby said that being able to dive with Griesemer has been an unforgettable experience.

“Overall, I am honored to have been on the team with such an inspiring and loving person,” Suddaby said. “We all achieved so much this year because we pushed each other to the extent we only dreamed was possible. I think I can speak for all of us on the team when I say that we are outrageously proud of her as a diver and as a person.”

Griesemer still has one year of graduate school at the college, but her four years of NCAA eligibility are over. However, she said she will still be around the team because she will be helping Griffin teach a diving clinic at the college in the summer.

Griffin said the clinic will help teach local kids of all ages more diving skills and give them an opportunity to practice. He said that he is looking forward to having her back.

Griesemer said that it feels great to end on such a high note at the end of her collegiate career.

“I’ve trained a lot in the past few years, and it’s awesome that I was able to do the best I could actually do,” Griesemer said. “I was able to experience my last Nationals with my teammates who have been through it all with me, so it was an incredible feeling. I couldn’t have dreamed of a better way to finally end my diving career.”