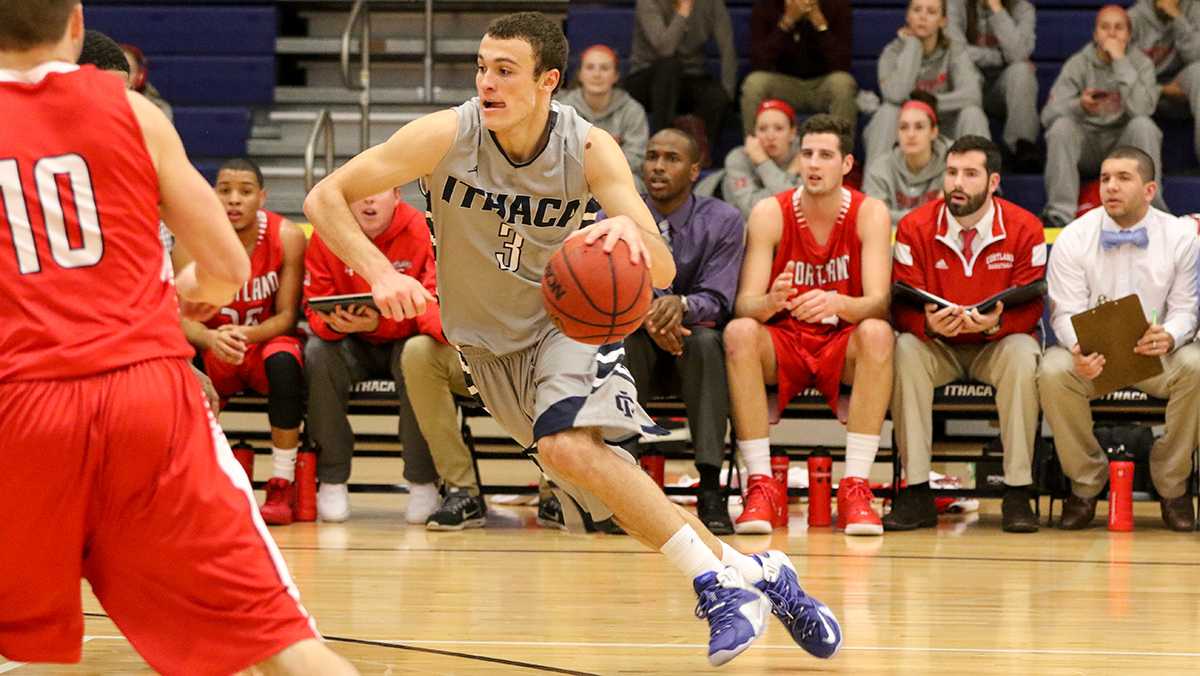 One of the biggest questions coming into this season for the men’s basketball team was how its youth and height would affect its play against its opponents as the season progressed.

On Dec.1 at Ben Light Gymnasium, the Bombers got their answer as the South Hill squad was physically and mentally persistent in its matchup against the taller and more experienced SUNY Cortland, coming back from numerous deficits and playing from behind most of the night.

But that youth and inexperience turned out to be just what the Bombers needed as sophomore guard Marc Chasin’s three 3-pointers at the end of the second half proved to be pivotal in the comeback for the Bombers, who upset the Red Dragons by a score of 83–74.

Chasin, who led the Bombers with 27 points, said the team is going to defy the odds all season and not going to give up no matter what the score is.

“That’s one thing we really noticed,” he said. “We have a lot of fight, and we’re not going to give up no matter how much we are down.”

The Bombers got off to a rough start, falling behind 10–3 in the first four minutes of the contest to their arch rival, forcing coach Jim Mullins to call an early timeout. Point guard Blair Estarfaa and center Grequan Carter helped Cortland control the momentum early, out rebounding and out shooting the younger and smaller Ithaca squad.

It did not get much better from there as the Red Dragons went on a run, forcing Mullins to call another timeout to settle down his young squad, which trailed by as many as 15 and as little as six as the half progressed.

However, things changed with three minutes to go in the first half as the Bombers were able to establish some consistency. They went on an 11–4 run, ending with senior guard Sam Bevan going hard to the basket, giving the Bombers a momentum shift, trailing by only six going into the intermission.

“In the first half we were completely out of sorts,” Bevan said. “But we fought back at the end of the half.”

They took that momentum into the start of the second half as the Bombers tied the score at 44 three minutes into the half. Cortland later retook the lead to make it 54–48 at the 13 minute mark, but at a price, as Cortland’s 6-foot-9 forward Zach Lydon left the game with an injury, losing Cortland’s height advantage and allowing the shorter Bomber players to drive to the whole more consistently.

Minutes later, freshman guard James VanDeventer made a huge three to tie it at 56. Then, seconds later, Bevan went in one-on-one with a Cortland defender to give the Bombers a 59–57 lead.

After that, Chasin took over, leading the Bombers on a 6–2 run to make it 65–63 with fewer than seven minutes to play.

The Bombers were able to withstand a few late Cortland chances, but thanks to clutch shots made by Bevan and Chasin, they were able to secure the victory, beating its arch rival for the first time in four seasons, ending a losing streak Chasin said he is glad is finally over.

“It’s a great win for us,” he said. “We haven’t beat them in a couple of years. We knew that, and it kind of fueled our fire.”

Bevan credits the younger players for the reason for the team’s impressive victory, claiming their hustle and poise were the reason they won the game.

“We have such a young team, but we are still so resilient,” he said. “That is our best quality: We never give up.”

The Bombers now improve to 4–1 on the season and continue their non-conference schedule at 2 p.m. Dec. 5 when they play at Ben Light Gymnasium against St. Lawrence University.