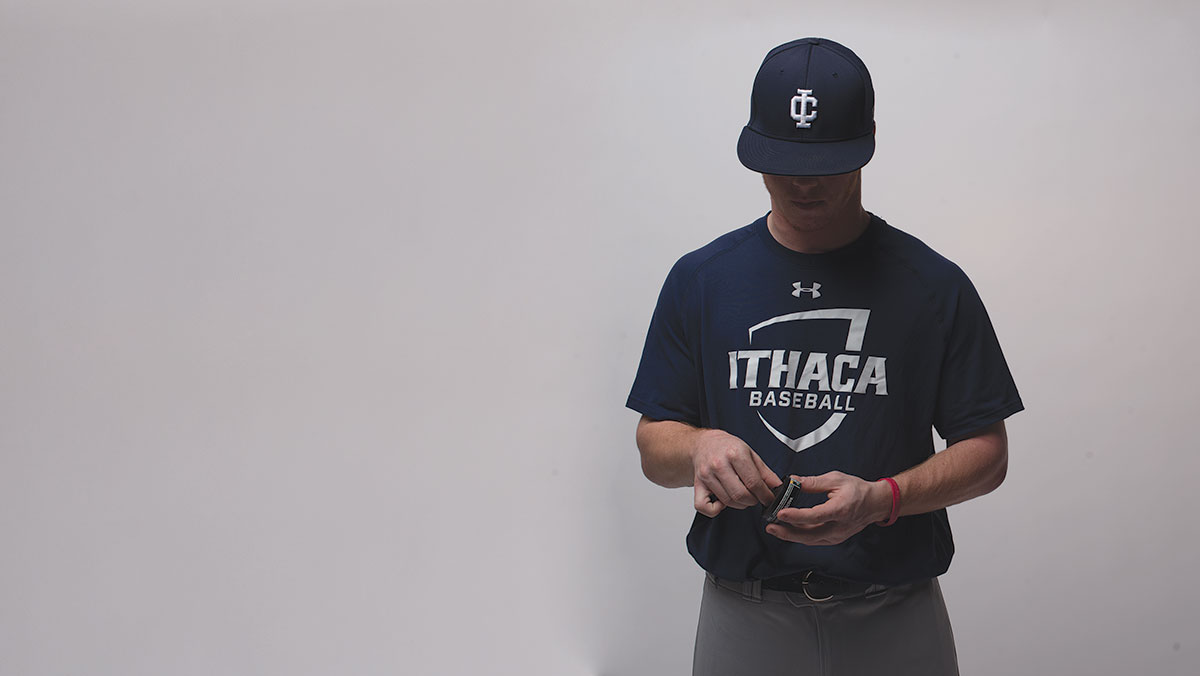 Sophomore pitcher Logan Barer understands there is plenty of downtime during a baseball game.

During that time, some of his teammates cheer on others while spitting sunflower seeds, gum or whatever is around in the dugout. But it was playing summer baseball in the Connecticut Collegiate Baseball League last summer that confirmed it’s not only gum or seeds that players enjoy chewing while playing baseball.

Playing for a team ironically named the Tobacco Valley Renegades, Barer watched as several of his teammates chewed smokeless tobacco during games.

“A lot of the kids on that team grew up in that area, and they worked on tobacco farms,” Barer said. “In that specific area, it’s part of the culture.”

Barer said he knows plenty of teammates on the teams he’s played for that still use chewing tobacco.

“Very rarely there are kids on the field who try to hide it,” he said. “Usually it’s a low-key practice. Personally, I’m against it because I know the health dangers. They can do whatever they want to do. You know what it does, and if you like the taste, you like the feel, go for it. Don’t offer me any, I’m not gonna take it.”

Mark*, a member of the Ithaca College baseball program, said there are players who use chewing tobacco on the team, however they never do it on the field.

“It’s around,” he said. “There are some guys on the team that like to do it on their own, but they keep it away from the field and the coaches.”

According to the Centers for Disease Control and Prevention, smokeless tobacco consists of tobacco or a tobacco blend that is chewed, placed in the oral cavity outside the gums, or inhaled or snorted through the nose, rather than smoked. In 2010, the CDC cited that baseball and rodeo are the two sports with traditionally high levels of smokeless tobacco use.

The NCAA voted to ban tobacco use in 1994, but according to NCAA reports, the rule was rarely enforced and teams caught using were often only issued a warning. However, in 2002, the Baseball Rules Committee added a bylaw to create a zero-tolerance policy, which instructed umpires to immediately eject players and coaches caught using it during the games.

Major League Baseball does not ban the use of chewing tobacco during games, though it is prohibited in the minor leagues and almost every college and professional league. In its latest labor negotiations in 2011, players agreed not to carry tobacco packages and tins in their back pockets when fans are permitted in the ballpark, and they cannot use tobacco during pregame or postgame interviews, or at team functions.

The untimely death of Tony Gwynn, 54-year-old former San Diego Padres outfielder, on June 16, 2014, once again brought the issue of chewing tobacco use to the forefront of baseball. The 15-time MLB All-Star was diagnosed with oral cancer in 2010, which he attributed to a chewing tobacco habit he had developed when he began playing professional baseball in 1981. Additionally, former MLB pitcher Curt Schilling announced he also had mouth cancer just two months after Gwynn passed away, bringing the issue to light in the league once again.

Nick Zibelli, president of the College Baseball Umpires Assigning Organization, said he has not caught or ejected players for using chewing tobacco recently, though he also said there is a key reason why it’s more difficult to enforce its use. The umpires, who are responsible for maintaining the NCAA’s rules during games, do not have the same enforcement policies for chewing tobacco compared to previous years.

“Our jurisdiction used to begin when we arrived at the field,” Zibelli said. “Now it starts when we receive the lineup cards from both teams. There could be somebody using [chewing tobacco] in the parking lot, and now we can’t really do anything about that.”

Baseball head coach George Valesente has had plenty of experience regarding the use of tobacco substances. Valesente said he had his first experience with chewing tobacco during his four-year career in the minor leagues. He said teams used to have chewing tobacco on clubhouse tables that was free to take at any time.

“It was sort of a cool thing to do,” Valesente said. “I was a pitcher, and there was a lot of dead time. Guys would try to spit on your shoes and stuff like that. But there was nothing that indicated that it was an unhealthy thing for you to do it at that time.”

When Valesente began coaching the Blue and Gold in the late 1970s, he said, he didn’t have a chewing tobacco policy, but when he read about the health risks in the 1980s, he said he wanted to make a team rule banning chewing tobacco during games and practices. As a result, he said its use during team activities dropped off significantly.

However, he said it didn’t stop some players from using it.

One of those players was Brian Parrotte ’90, who played baseball for Valesente in the 1980s. Parrotte played on the Bombers’ 1988 National Championship team and was one of four players to play professional baseball from that squad.

Parrotte said he estimated that about 50 to 60 percent of players on the team — including himself — used chewing tobacco during college.

“It did not make me happy when he did do the rule,” Parrotte said. “His explanation you could not argue with. He basically looked at us and said, ‘The last thing I want to see is one of you end up with something medically wrong because you’re doing something that’s not good for you.’ He was looking out for us. When you’re an 18- to 19-year-old kid, you don’t see that right away.”

Parrotte said the culture around chewing tobacco for the team was altered after a fall college baseball game in 1986 when Parrotte and his teammates left a chewing spittoon on a team van. As a result, he was suspended for a game along with four other teammates.

“He didn’t even speak to us all day long,” Parrotte said. “Our job is to chase foul balls and to be seen, not heard. The van incident was the cultural turning point. Our captains got very serious. Any guys who wanted to continue to chew didn’t chew around captains either. They didn’t want to be in Coach Val’s office. That’s the last place they wanted to be.”

Parrotte played two seasons in the Cincinnati Reds’ minor league system in 1988 and 1989: one for the Gulf Coast League Reds in Florida and another for the Billings Mustangs in Montana. Echoing Valesente, Parrotte said chewing tobacco was a familiar presence in professional clubhouses.

“When you play professional, they put it in your locker for you,” he said. “It would be sitting there in your locker. Your clubhouse manager would put it there. It was the U.S. Tobacco Company that used to just send the shipments of it to the trainer. In the minor leagues, it was maybe one or two guys that didn’t chew on the whole team.”

After he finished a brief stint in professional baseball, Parrotte returned to help coach the Bombers. He said it was then he noticed the lasting effect Valesente’s rules had on the use of chewing tobacco on the baseball team.

The use of chewing tobacco isn’t just limited to its student-athletes either. According to the American College Health Association’s 2013 National College Health Assessment, 2 percent of Ithaca College students reported using smokeless tobacco in the past 30 days, which is below the national average of 4 percent. However, 12 percent reported that they had used smokeless tobacco at least once in their life.

Nancy Reynolds, Health Promotion Center program director, said chewing tobacco is one of the most common causes of oral cancer.

“Every substance has it’s adverse effects, but tobacco products are among the few that have been directly linked to cancer,” Reynolds said. “So the notion that ‘chewing tobacco can kill you’ is not far off the mark.”

Reynolds also said though the percentages of chewing tobacco at the college are below the national average, baseball players seem to continue to use it because of tradition and nature of the game.

“Baseball players are not continuously active during practices and games,” Reynolds said. “They are better able to chew while doing their sport, as compared to athletes whose performance demands continual physical effort.”

When asked about the future of chewing tobacco in baseball, Valesente said its use will continue to shrink because players are more educated about its effect than players in the past.

“From a personal standpoint, I’m glad I didn’t chew very long,” Valesente said. “As I say back then, we all smoked cigs, we all chewed tobacco to a degree if you were playing pro baseball. I’m really glad I passed on it and moved away from it.”

Parrotte said he believes it is a generational habit that will take a few more decades to completely remove from the game.

“I think you’ll see less chewers in baseball,” he said. “But it’s going to take time until the chewing population retires.”