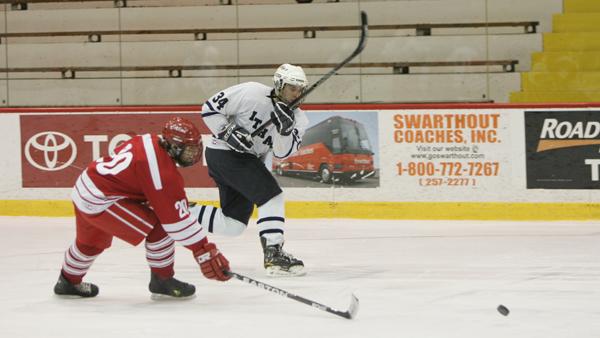 Durst Breneiser/The Ithacan
Then-junior Tim Finnerty prepares to battle for control of the puck during a January 2012 game against SUNY-Cortland. This year, four of the top five point scorers will be graduating.
By Karly Redpath — Contributing Writer
Published: February 6, 2013

As the referee skates to the center of the rink, the Ithaca College men’s club ice hockey team’s first line takes the ice. The five players stand ready as the puck falls, and the centers fight for possession. After a moment, junior center and co-captain Rory Foster bats the puck to one of the other players on his line. Chances are that whoever gets the puck will be a senior.

The team has had one of the best seasons in recent years. With an 11–10 record and the end of the season coming up in the next few weeks, the team still has the chance to make the postseason.

With nine graduating seniors, there is going to be a great deal of talent to make up for come next year. Foster said the seniors’ leadership and openness has not only allowed the team to make another push for the playoffs this year but has also created an environment that every player loves.

Many of the seniors on the club hockey team have been playing since their freshman year. They account for 139 of the 229 total points in the season, and four out of the top five point scorers are graduating this May. Foster said the team knows it is losing members who are an integral part of the team.

“It’s going to have a major impact, losing such important, vital parts of the team,” Foster said. “You know, they’re leaders, and they’ve played really great hockey for us for the past four years. With a senior-heavy team, it’s going to be tough to replace that leadership.”

But despite this, many of the seniors are confident the team will continue to be successful in the following seasons.

“We kind of have our identity this year,” senior defender TJ Lane said. “But [the team next year] is just going to have to fill in for a lot of the seniors with some new guys and maybe come up with like a new system or strategies to fit their new players. Overall I think they have a good base, so they can definitely do well next year.”

Creating this identity is something the players believe will take some time. Senior forward and co-captain Tim Finnerty said the chemistry the seniors have on the ice is something that not only developed from becoming friends and gaining each other’s trust off the ice but also can be accredited to playing and practicing with each other for years.

“I’ve been playing with [Chris] Menzel for four years now, so I just know where he is on the ice,” Finnerty said. “I think that when you play with them for a while you just know where they’re going to be, and it helps with the chemistry, helps with putting points on the board.”

For many of the seniors, continuing their hockey careers on the club team allowed them to be competitive in a setting that is not as demanding as being on a varsity team. Many of them have become close friends after spending time together on the team.

“There are some great guys on the team; we’re really kind of like a family,” Finnerty said. “We all go out there and play hard, but we also hang out with each other on the weekend. So its not just going to practice or to the game, its like we’re part of a family.”

Looking to next year, Foster said there is going to be some needed preparation to fill the hole left by such important players.

“We’re going to be doing a lot of recruiting, hopefully bring some guys into the fold, and with that we’re hoping that everything else just kind of falls into place,” Foster said.

All of the seniors have been playing hockey for more than 10 years, and these final games on Ithaca’s club hockey team mark the end of their long careers. While some haven’t even thought about it being the end, others look forward to their future careers grimly. Senior defender Wayne Giovinazzo said that finishing this season will be bittersweet.

“Playing in these last few games is definitely going to be upsetting,” Giovinazzo said. “After this I’m going to have to start playing in a beer league where you can’t hit, can’t fight, can’t have any more fun.”

But there are others that are only looking as far ahead as playoffs coming up in a few weeks.

“I’m definitely going to give my all in the rest of the regular season games,” Lane said. “I want to win and make playoffs, so I’m going to try my hardest. It’s going to be sad when it’s over though. I definitely have to cherish every second I have left on the ice.”