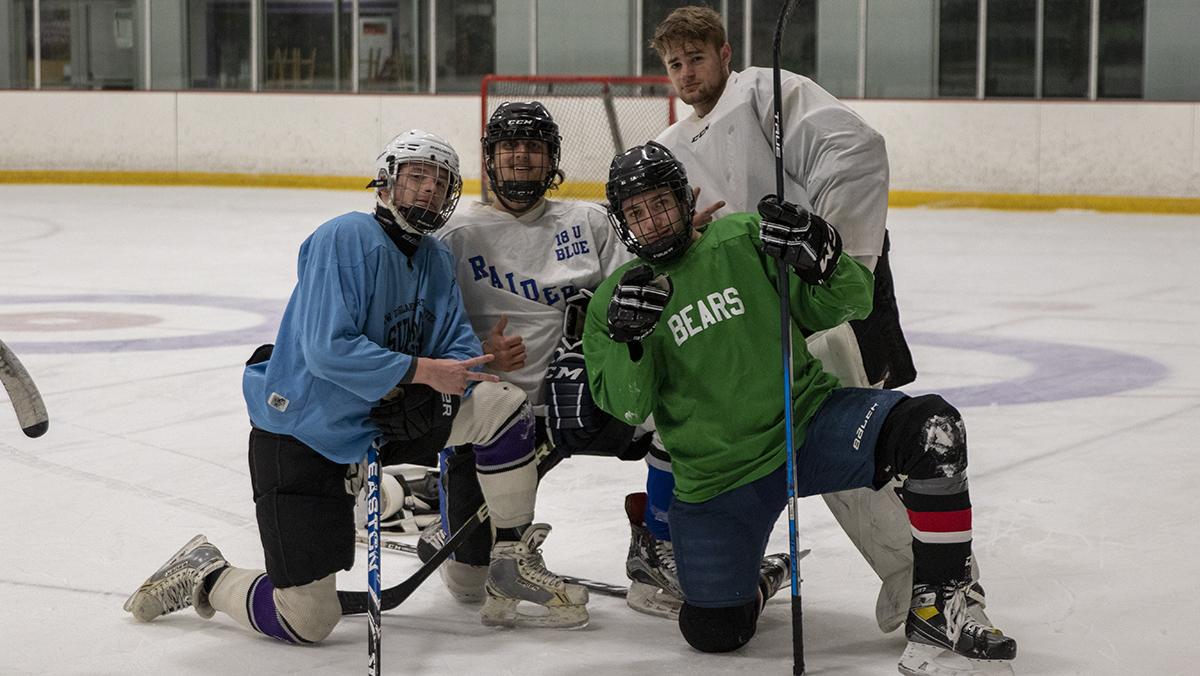 Club ice hockey is just one of 40 club sports offered by Ithaca College, which can make it easy to get overlooked. But for the players on the team, it can be a good way of getting involved with a sport that the college does not offer at the varsity level.

Senior Harrison Fried, president and team captain, said he has been playing ice hockey since before he was 10 and even though he did not want to play Division I in college, he knew he wanted to keep playing after high school.

“I always knew hockey was going to be part of my life, through and through, one way or another,” Fried said. “So when I was looking at schools … club would be a really good option for me, so I could pursue my career and hockey could still be a part of my life.”

But even though Fried said he was able to find the club prior to coming to the college, he knows it is not the most well-known club on campus.

“I can’t tell you how many times people have come up to me and said, ‘Ithaca [College] has an ice hockey team?’” Fried said. “It’s definitely, I think, a hidden gem. … We do have fans come to the games. It’s a lot of fun, and they’re competitive games.”

While Fried said they are making an effort to increase awareness of the club by improving its social media, for the time being, the team has seemed to embrace the humor of few people knowing the college has an ice hockey team. The club’s Instagram account bio reads, “yes, Ithaca does have a hockey team,” and all the posts from before Nov. 2021 were archived or deleted.

Sophomore Lauren Sieber is one of the people working with the club on trying to grow its social media presence and helping the team from behind the scenes. Sieber said she first wanted to play for the team because she had played in high school, but decided against it. While the team is co-ed and includes two women on the roster, Sieber said the physical difference in men’s and women’s hockey deterred her from joining.

“I was interested in playing but then I saw that we’re playing against other guys, and I didn’t really want to be chucked into the boards,” Sieber said. “Harry [Fried] gives us the option to play, but … I didn’t want to get hurt, potentially.”

Sieber added that Fried and the team take precautions regarding the two women. In women’s hockey, checking is not allowed, and Sieber said the two women are smaller than the other players on the team, so Fried mostly just plays them against teams that are less aggressive. Fried said the team is inclusive, so it will allow anyone to join as long as they are committed.

However, Sieber said her current role is a great way for her to still be involved with a sport she loves. She said the team is trying to grow its presence and thought this semester would be the start of more publicity, but multiple obstacles have gotten in the way.

“We were hoping this semester we would have the opportunity to get more media and photos,” Sieber said. “But our games keep getting canceled … not only [because of] COVID but Cornell had some issues [because of bomb threats], and traveling back and forth [is hard] … [Ithaca College] doesn’t have a bus that supports us.”

The team practices twice a week and plays home games at The Rink in Ithaca, about 15 minutes from the college. It plays about 10–15 games per season in the Upstate New York Club Hockey League (UNYCHL), a league comprising 19 teams in the state and one in Pennsylvania. Each game is scheduled between the clubs’ presidents based on a list of teams they have to play.

Sieber said the players have to carpool to get to games and practices. The home games are easy, but away games can force the team to travel three hours or more. For the most part, though, she said they play against teams closer to the college, like Cornell University, SUNY Cortland and Binghamton University.

Despite all the challenges that come with being a part of and running the club team, Fried and Sieber both said the whole team loves playing the sport.

“Everyone’s there because they want to be there,” Fried said. “There’s a lot of energy on this team and a lot of excitement. … It’s honestly inspiring, and it motivates me every day. We got a great group of people this season.”

Junior Dylan McCrink said he joined the team because he played hockey for a lot of his life, but other sports took priority for him in high school. He said the club team has helped him get back into the sport.

“I kind of rediscovered my passion for hockey a little bit in college,” McCrink said. “I was always pretty good, but didn’t think I could play Division III or anything. So I found the club team, and then it kind of just went from there.”

Senior captain Alex Butler said he is also happy that the club gives him a way of continuing his athletic career. He added that athletics are an important part of his identity, so club hockey has been a great way of getting to keep that as a part of his life.

“I think [club sports] are super important,” Butler said. “I’ve been an athlete my entire life and it’s something that’s a part of my identity. I love playing sports, and being able to play a club sport where I might not have been able to play a varsity sport, it’s just very nice to have.”

As captain, Fried has a large role in practices and during games. However, because each club team needs an official coach, he said Josh Bonnetta, associate professor in the Department of Media Arts, Sciences and Studies, is the volunteer acting coach. The previous coach was a former player for the team who recently moved away.

“It’s [Bonnetta’s] first year coaching with us and he’s, you know, getting to know the team and the systems of this league,” Fried said. “He’s a fantastic guy. We’re very happy to have him on board.”

Fried said he runs practices, while Bonnetta helps run drills and takes on a managerial role during games by calling out lines and keeping an eye on the players.

But while Fried and Bonnetta help foster a serious atmosphere to keep the team playing hard, Butler said the commitment is not too much.

“It’s not crazy serious. Our team knows that academics come first and that this is a club,” Butler said. “But when we get in there, everyone is taking it very seriously, trying to win. We do what we can to win.”

McCrink said the team is trying to win, but has had a hard start to the season in the fall. Through the first eight games of the season, the team did not earn a win, but not for a lack of trying. For starters, it played without an experienced goalkeeper for several games, and when it found a permanent one, McCrink said it took him time to get into rhythm. Now that the pieces are starting to fall into place, he said he thinks that the team could be much more competitive this spring.

“It was kinda tough to adjust our squad to this guy who hadn’t played goalie in a while,” McCrink said. “But we’re getting competitive a little bit more, and we’re getting more players to come in.”

Bonnetta had high praise for the team’s mentality, especially the new goalkeeper. He said he knows the season has been hard, but the club is pushing through.

“This season has been challenging, and it’s not down to the team’s organization or skillset,” Bonnetta said via email. “I’ve been impressed by their positive spirit despite the tough losses. I think the [sophomore] goaltender Jack [Forrestel] … should be commended as he shoulders a lot of pressure.”

Bonnetta also said the team does not have a lot of players, which has contributed to why it has not been a great season for the team on paper. But he added that, because the team advertises mostly by word-of-mouth, he is impressed with the caliber of players it has right now.

“Maybe there could be a better way to reach students than what’s been relied on in previous years,” Bonnetta said in the email. “Even teams with smaller student populations like Le Moyne, for example, have a much deeper roster than we do.”

Most importantly, Fried said he just wants people to have fun and play hockey. He said the club is inclusive to whoever wants to join, whether or not they have experience, because it is all about the energy and enjoyment.

“If you want to give it a shot and be a part of the team, that’s all we can ask for,” Fried said. “[People who are new to hockey] bring a ton of character to the locker rooms and practices, on gameday and in team dinners. So that’s something I’ve experienced through my whole career playing at Ithaca. … We love growing the game.”