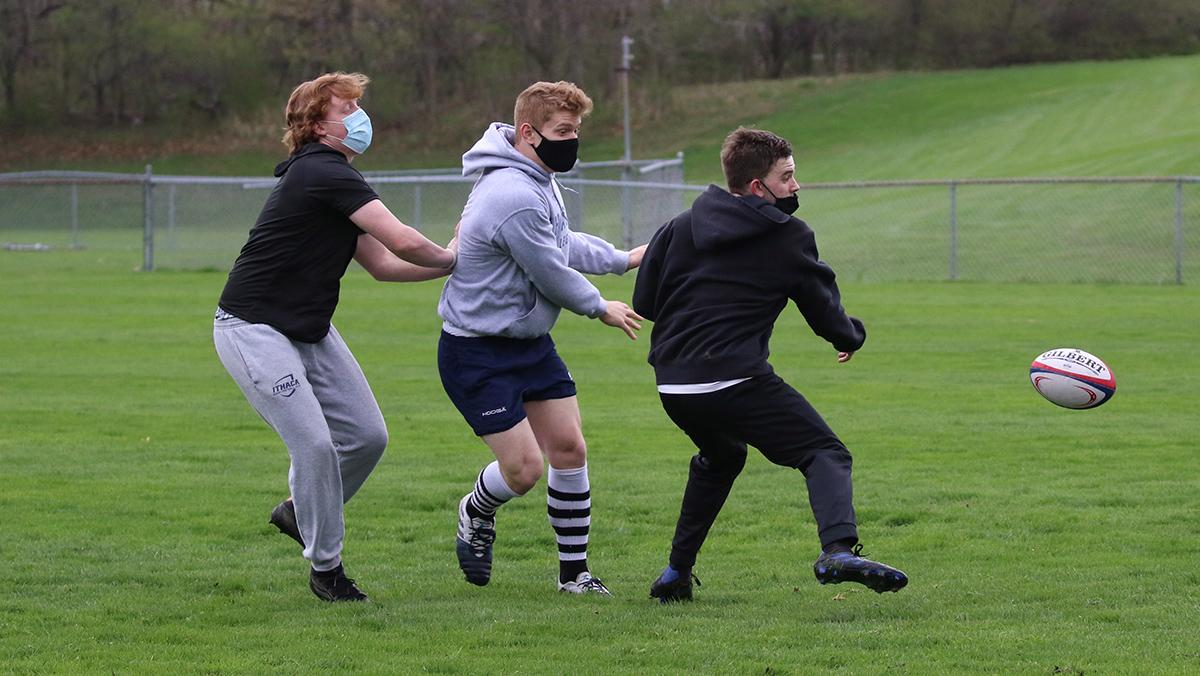 In a sport like rugby where tackling and rucking are essential aspects of the game, having to socially distance while practicing may seem impossible. However, the Ithaca College men’s club rugby team is using this time for returning players to gain more experience and for new players to get acclimated to the club before competing in the fall.

As varsity sports enter the conference championship portion of their season, the club rugby team has recently been allowed to participate in limited contact practices. After waiting months to practice on a field as a team, the team began practicing on Yavits Field on April 12. The team has approximately 30 people attend each practice, compared to the average team size of 45 to 50 players, and everyone is required to wear a mask at all times. When the team does a scrimmage, instead of tackling, players tag each other with two hands. Although the team can now do contact drills, its practices have mostly consisted of the basic fundamentals.

Since two-hand touch scrimmages do not accurately simulate how a game would flow, senior Conor Quinn, president of the club, said the team has focused on getting the recruits ready for a potential fall season. Quinn said the team was able to attract approximately 15 new recruits this semester. While that is fewer than usual for the club, Quinn said he is happy with the group the team has and the atmosphere at practices.

“We do enjoy playing rugby, and that’s obviously our first priority,” Quinn said. “But also, we just love to separate ourselves from the rest of our day and go to practice and have fun.”

Practices have been held on Yavits Field — rather than its normal field at Butterfield Stadium — twice a week, with practices lasting an hour. In a typical season, the team would practice four times a week.

“I feel like this is the main issue for a lot of club sports, it’s just mainly facility time and getting access to the facilities,” Quinn said. “[Our main disadvantage] has always been facility time, especially in the spring with a lot of varsity sports. With the fall sports still doing their practices and lifts, facility times usually get left to late at night. But now with COVID, they’re obviously more limited and club sports still have to work around that.”

Club sports are allowed to have some contact during practices but are unable to hold full-contact competition nor leave Tompkins County. Though the team would like to have some competition, head coach Annemarie Farrell, associate professor and chair of the Department of Sport Management, said she is content with having intrasquad practices for the time being.

The club will come back to South Hill in August and will be participating in full-contact rugby for the first time in over a year. However, Farrell said all of the team’s conference opponents in the Upstate Small College Rugby Conference, which is part of the National Collegiate Rugby Organization, played in the fall and this spring. Farrell said she thinks the team will be impacted by the time off, but she will focus on how the club can prepare for the season.

The college’s club rugby team has been able to develop a prestigious reputation, as the team has not lost a regular season game to a Division III opponent in six years, Farrell said. Even with all that success, still, Farrell said there is no pressure on the players to live up to a championship standard.

Even though not all of the new players have rugby experience, senior Ryan Gilmore said he is encouraged by what he sees out of the underclassmen.

“I feel like we got a very good group of committed guys,” Gilmore said. “All these guys seem to love rugby. I know we have a few players who played before and they were the main people who recruited and told people about the sport. … Now, it seems like we have a couple of groups of people here that seem really committed and excited for next year.”

One of the freshmen who joined the team this semester, Sammy Harig, played four years for Canisius High School in Buffalo, New York. Harig found out about the club rugby team when he took a sports management class in the fall with Farrell. When Harig arrived on campus, he got his friends to join with him. Harig said that even though he was the only one in his friend group to have rugby experience, they all picked it up quickly.

“Because we’re all pretty passionate about it, we try to practice whenever we can,” Harig said. “Even outside of practice, I’ll be working with the guys and teaching them skills and passing techniques.”

As Quinn prepares to leave the club after playing four years, he said he is encouraged by its future and thinks the team will continue to attract new recruits.