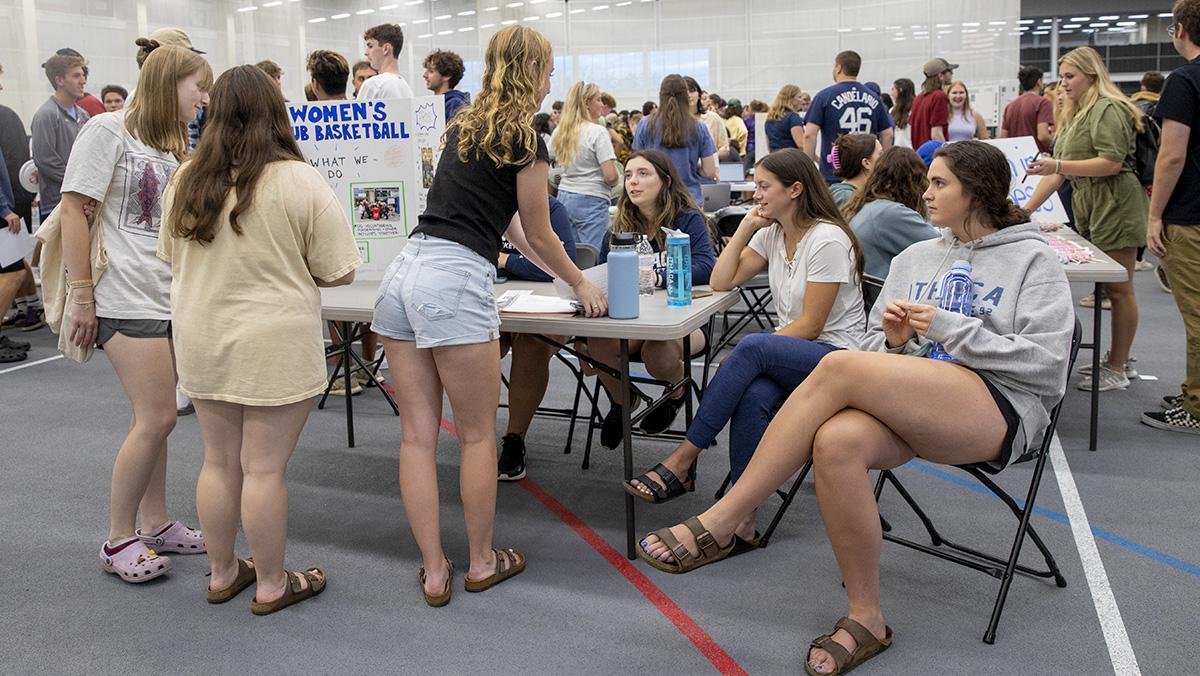 Ariana Gonzalez-Villarreal/The Ithacan
Club sports teams recruited members at the college’s Student Organization Fair on Aug. 21. It is one of the ways club sports are able to bring in new members.
By Nicolas Rosado — Staff Writer
Published: September 6, 2022

As students have settled in to campus for the fall semester, Ithaca College club sports are beginning the process of recruiting new and returning students to join their organizations for the upcoming academic year.

Club sports have served as an extracurricular for Ithaca College students looking to stay active, meet new people or just get involved on campus. Some students who have an interest in joining club sports previously played a sport in high school or are just trying to get into a sport for the first time. With that, club sports teams at the college recruit different types of players from events, social media posts or on-campus advertising.

One of the many teams recruiting new players during the fall semester is the club tennis team. Senior Dylan Potemri, the president of club tennis, said he and his executive board recruit new players to their team in a variety of ways.

“So we obviously have the org[anization] fair, we try to get as many new people as possible. We also have online on [IC] Engage,” Potemri said. “We just kind of let people reach out to us here. If we see people playing tennis around, we ask them, ‘hey, do you wanna come join our club tennis team?’ We also have an interest meeting that we’re holding.  … We reach out a little bit, but we have quite a bit of people who come reach out to us via email asking about it.”

Through the recruitment process, there is not a particular demographic of players that teams look for. Students come to college after years of playing sports throughout their lives, with varying levels of skill.

Senior Kelly Ford, women’s club lacrosse co-president, said that being an active presence on campus is key in sustaining a strong environment for her organization.

“We’re signing up for every fair that comes along this semester, as well as posting on [IC] Engage, as a way to connect to new students, because I know that a lot of new students are active on Engage,” Ford said. “As well as posting flyers around campus, and using the IC recreation Instagram to post our flyer as well.”

The Office of Recreational Sports affords some of the many opportunities to these club teams for recruitment. Despite the high number of club teams — 27 this academic year — the office has to cater to, numerous club sports presidents believe that the administration does an adequate job of aiding each team.

Senior Kiley Mabus, club softball president, has advocated for the work that the Office of Recreational Sports has done for her team in helping them run their organization smoothly, even with all the teams they have to support.

“I think they do a good job for how many teams and clubs they have to organize and communicate with,” Mabus said. “They’re definitely on top of things, like if we need money, or something from them, or are missing a form or something, they’ll reach out and tell us to get it in.”

Senior Grace Baranick, women’s club basketball president, said the teams appreciate the work the office does in supporting their efforts to continue playing a sport they enjoy.

The recruitment efforts have been successful for many teams early on in the year, as some teams have caught the eyes of prospective students looking to continue their playing days. Potermi said club tennis had 79 students sign up at the organizational fair, and 27 showed up to their introductory meeting. Mabus said softball saw 12 students sign up for their team, and all but two of those showed up to tryouts. Baranick said women’s club basketball received interest at the organizational fair from about 20 students, with more reaching out via email and social media.

“I’ve played tennis my whole life, so I felt like I might as well keep playing at this point,” Butler said.

The experience of being part of a team is also a worthy contribution among many students looking to play club sports, and there is no shortage of that desire for Butler.

“I really just wanna stay competitive,” Llewellyn said. “I was really competitive in high school, and I just want a chance to use that energy and keep playing.”