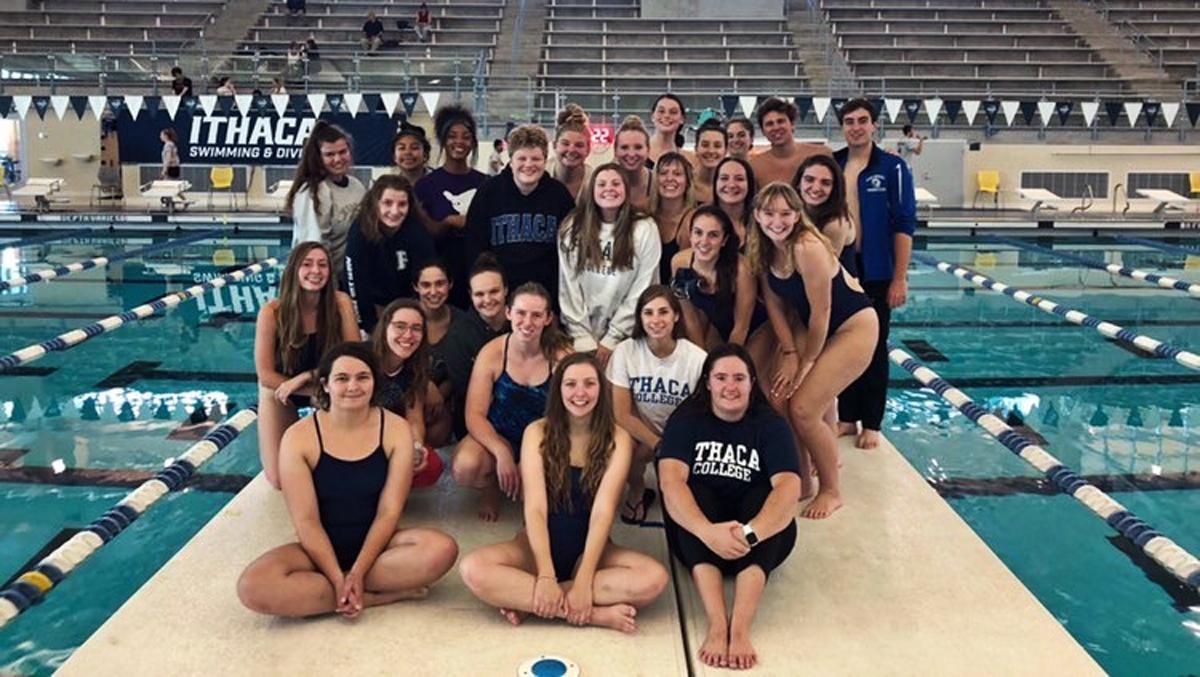 COURTESY OF ITHACA COLLEGE CLUB SWIM
The club swim team posted several strong performance at its first meet of the season held at Kelsey Partridge Bird Natatorium. This was the second time the team has hosted a meet.
By Emily Adams — Sports Editor
Published: October 10, 2019

The Ithaca College Club Swim team hosted and competed in the 2nd Annual Ithaca Narwhal Invitational on Oct. 5 in the Kelsey Partridge Bird Natatorium. This was only the second time a club swim meet has been held at the Bombers’ home pool.

“All the teams had a lot of fun,” senior co-president Sarah Griffin said. “The Masters team actually was really happy because they got to compete in a different environment than they normally do. It was a little more high energy because we’re all students.”

A highlight of the meet was 85-year-old Marcelo Barreiro who competed in the 500-yard freestyle, a 20-lap race. Hosking said Barreiro finished to applause from all of the spectators in 16:46.71.

Hosking said the team did not originally plan to host the meet again this year, but it decided to pull it together after many members expressed an interest in it. It began the process in August, and she said the club officers had to scramble to get everything together in time.

This meet was the squad’s first competition of the season. The swimmers have only been practicing for approximately three weeks, so, Griffin said, it was an exciting opportunity for them to gauge where they are with their fitness levels and to see the potential of new members.

“We essentially allow anyone on the team who can swim,” Griffin said. “They don’t necessarily have to be fast. We had so few practices, but there were still pretty good times. We had a couple people make nationals, which is really exciting.”

Several Narwhals posted strong performances despite it being early in the season. Junior Kristen Reid placed second in the 50-yard freestyle and qualified for the Collegiate Club Swimming National Championships with her time of 27.00. Reid also took fifth in the 50-yard breaststroke in 37.40, missing the nationals standard by just over .3 seconds.

Freshman Lauren DePietro won both the 100-yard freestyle and the 100-yard backstroke in times of 1:01.69 and 1:11.17 respectively. Those times were fast enough to qualify her in both events for the national championship.

Junior Avamarie Ginocchio took third in the 100-yard freestyle in 1:02.39, just making the cut for nationals by exactly .3 seconds.

Sophomore Beth Ryan joined the team this season and said the Narwhal Invitational was her first time swimming competitively in five years. She said competing at home reduced her nerves about racing for the first time with the club team.

“I’m glad our first meet was at home,” Ryan said. “It put me more at ease since I’ve grown comfortable swimming here for practices. It took away a lot of the stress of travel and getting used to a new pool.”

Ryan raced in the 100-yard freestyle, the 100-yard individual medley and the 50-yard butterfly. She swam a 31.26 in the 50 fly, missing the nationals standard by just over half of a second. She was also less than a second short of the qualifying time in the 100 free with her time of 1:03.54.

“My main goal is to qualify for nationals this spring, even if it is just in one event,” Ryan said. “It would be an incredible experience to compete at a meet at that level. We are starting to ramp up the intensity in practice now after the first meet, so we can all start dropping time.”

The national championship will be held April 10–12 in Greensboro, North Carolina. Athletes from up to 154 teams will be present.

While the meet provided an early competition opportunity, it also served as a fundraiser for the Club Swim team. Club sports at the college are required to raise a certain amount of money in order to retain their statuses as club teams. Hosking said that the money raised from entry fees helps the team afford to travel to other meets throughout the season.

Despite the workload of running a meet, Hosking said, she hopes the team will continue hosting competitions in the future.

“Our pool is amazing compared to a lot of other colleges,” Hosking said. “It is a good source of fundraising, and I think all the other teams really enjoy it as well as our team.”

Clubs pair together to host Swim-A-Thon for Autism Speaks