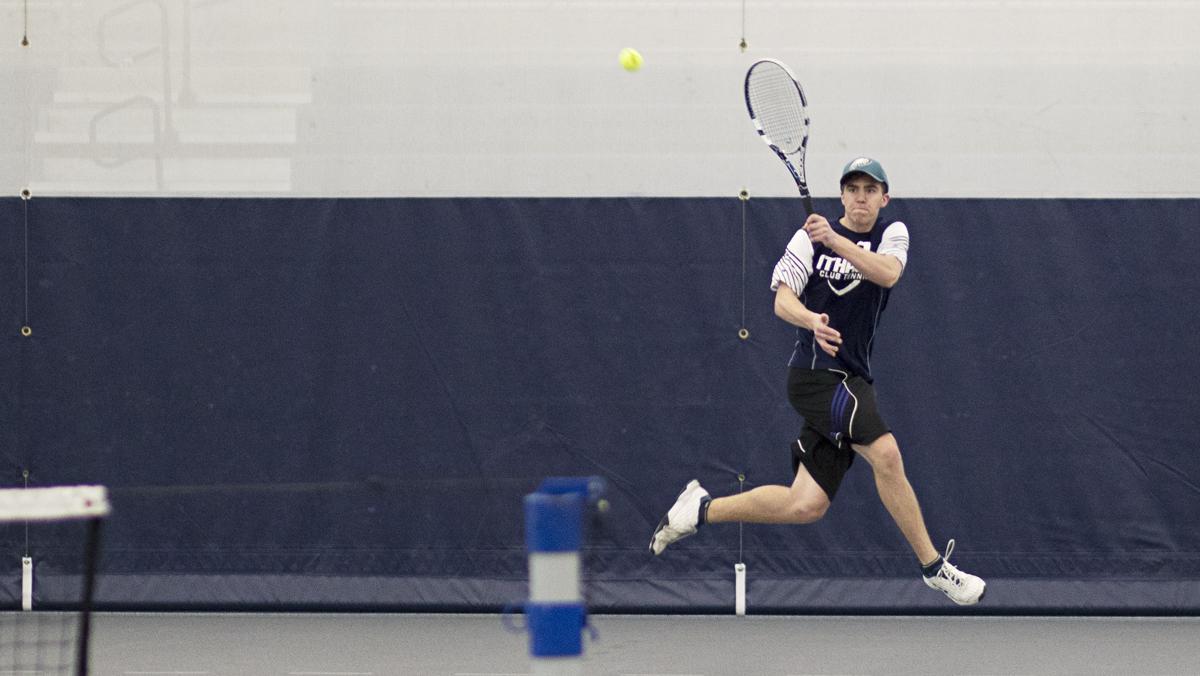 JACKIE MARUSIAK/THE ITHACAN
Junior Ryan Buchanan returns a volley during the club tennis team's practice March 31 in Glazer Arena. The team has more than twice as many freshmen as the varsity squads.
By Jack Murray — Sports Editor
Published: April 15, 2019

Junior Ryan Buchanan, vice president of the Ithaca College club tennis team, steps up to the baseline during practice April 11 and eagerly awaits a chance to strike the ball. Two of his teammates are on the opposite side of the net, hoping to defend their ground. The ball advances to him, and he winds up for his return. The ball pops off of his racket and soars toward his opponents, who return the ball to the net, ending the point. Buchanan sprints to the other side of the court and awaits his next opponents. He is now the “king of the court” and will be defending his throne from his challengers.

This drill, along with several other game–simulation training exercises, makes up the majority of the club tennis team’s practice. Though these drills have been a staple for the club since its inception in 2013, their quality has risen due to the spike in participation that occurred with the current freshman class.

The club added 10 freshmen who participate consistently to the team this year. Club president Lucas Veca said the jump in participation has been a result of the freshmen who joined at the beginning of the year, choosing to continue on through the winter instead of losing interest once the weather gets cold. He said he isn’t exactly sure why this year’s core decided to say, but it has revitalized the program.

“The club has been increasing in both the amount of people and skill level each year since I started, but this year, I don’t know what happened,” Veca said. “We usually lose people in the winter, but this year, we didn’t.”

Buchanan believes the team’s ability to recruit at various events for freshmen students may have led to the increased interest, but the positive atmosphere the team promoted from the start of the year is what kept the new players around.

“We do a lot of recruiting at the start of the year,” Buchanan said. “We have people tabling at orientation as well as Ithaca Today and also at the organizational fairs. We had a lot of people coming to our first couple practice, and we were able to set a standard of a really friendly practice climate. People really loved it and clicked, so we were able to keep our membership.”

The club serves both men and women at the college who wish to play tennis in an atmosphere that is less intense than the varsity level. The club team was able to bring in more than double the amount of freshmen students than the varsity teams — the men’s and women’s varsity tennis teams brought in a combined four between them. Buchanan said he thinks the club team is able to attract players who may have considered trying out for the varsity team but did not want the constant commitment the sport would require.

“People at college really see academics as something that comes first,” Buchanan said. “They may not want to have the additional stress that varsity provides and may not want the extra time taken away. As far as the club team goes, we have a very light atmosphere, and a lot of bonding goes on.”

The club team practices Monday through Thursday for two hours a day on the Green Tennis Courts by Rothschild Place when the weather is nice, and two nights a week during the winter. The wintertime practices will usually occur from 9 to 12 a.m.

Veca said that even though the Athletics and Events Center can be difficult to reserve for the team, having it readily available gives the team an advantage over other club tennis programs.

“The facilities allow us to host tournaments and have practices in the winter,” Veca said. “There are a number of schools that we have talked to that basically go the whole winter without practicing because there is no facility space. Renting space is expensive, so us having the A&E Center gives us a lot of ability to do various things that other teams are not able to do.”

Freshman Sydney Rachlin came to the college after playing tennis all through high school and serving as a captain during her senior year. Despite her previous experience, she was nervous about being good enough for the club tennis team before her first day of practice. She said the team was instantly welcoming to her and the other freshmen.

“The first day was pretty nerve-wracking for me because I thought I wasn’t good enough, and I was scared I wasn’t going to make it, but it turned out to be the complete opposite,” Rachlin said. “It didn’t matter if you played since you were three years old or never played in your life before. They didn’t care — they just wanted you to have fun and have a good time.”

Freshman Emma Waite had even more experience with tennis before coming to the college, as she had been taking lessons since she was in fourth grade, had been a two-year starter in high school and also was a senior captain. She said that the club tennis team existing influenced her decision to attend the college.

“When I came to accepted students day, I knew that club tennis was an option, and it weighed into my decision to come here,” Waite said. “I was kind of banking on it to make friends because this was something I knew I could make friends with.”

Veca said the club tennis program hopes to be an outlet for people who love the sport of tennis but don’t want to deal with the commitment of the varsity team. He said that the team accommodates the athlete, and what they put into it is what they will get out of it.

“You don’t have to go to a tournament if you are not around,” Veca said. “Your commitment to the club is based on your schedule, and while we would love if you were fully committed to the club and came to all of the events, but we recognize that stuff happens. Your life isn’t club tennis, and that’s perfectly fine.”