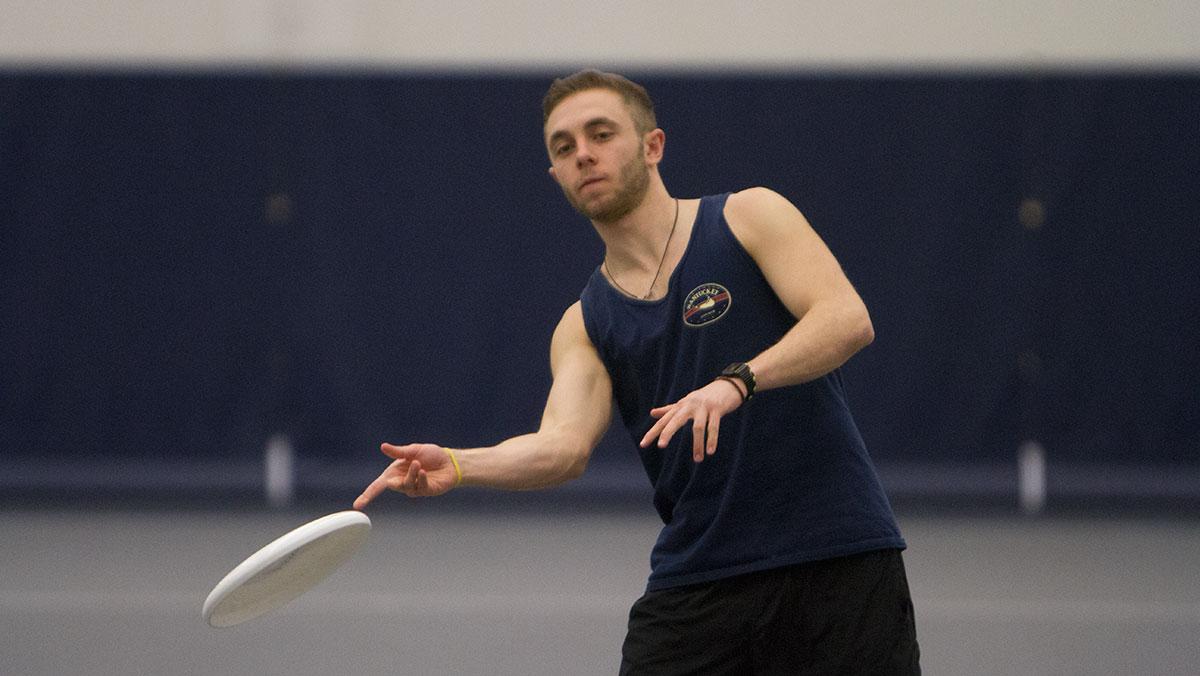 Over spring break, the men’s club Ultimate Frisbee team was presented with a shot at a tournament title, something none of the six seniors on the team had accomplished in their four years with the team.

Senior practice captain Brendan Vogt said this win represented the end of the team’s rebuilding stage, having expanded its roster from roughly seven athletes to over 20 in fewer than two years.

“It means everything,” he said. “It means we aren’t a new program or a development team anymore. This program has a foundation underneath it now, and we can start building brick by brick. Everyone is ready to work.”

The team spent its spring break in North Myrtle Beach, North Carolina, competing in High Tide 2015, the largest college Ultimate Frisbee spring break tournament in the world. High Tide hosts four weekly tournaments, running from Monday to Thursday throughout all of March, in order to accommodate the majority of college spring break schedules.

Sophomore cutter Kevin Doubleday said the team’s enthusiasm for the tournament was a morale boost heading into the championship game.

“We were incredibly confident,” Doubleday said. “We had a good roster, and more importantly, passion for the sport and respect for each other.”

The Bombers finished on top in the B division of the tournament, beating out seven other college teams, including larger schools such as Yale University and Lehigh University.

Vogt said the day-to-day grind the squad put in throughout the year finally paid off.

“We felt good about our team this year,” Vogt said. “We had a lot of young players that were developing nicely, and we had been working hard all winter to be ready for the outdoor season. We wanted the trophy badly.”

Sophomore Adam Sharabi said although the sport is not recognized as often as other sports, the team’s success is exciting from any competitor’s standpoint.

The team currently consists of 20–25 athletes, fluctuating as players come and go according to their personal schedules. The men’s team often practices cooperatively with the women’s team at all hours of the night — sometimes ending practice as late as midnight — in the Athletics and Events Center. Junior Peter Fulton said the later time slots are the only available practice times the team can get.

“Regardless of these difficult practice times though, the team has been working hard and definitely has deserved this title,” Fulton said.

Doubleday said the team’s next goal is to make it to regionals, which it qualifies for by winning sectionals. He said the win helped the team gain momentum as it moves forward.

“Every single player on our roster played the best he could play, put in 100 percent effort and contributed to the team,” Doubleday said. “We won by taking every single point of every single game seriously and with intensity. We all played tight defense and never gave ourselves a break on the field.”

The tournament success is widely considered a team win rather than the result of a single player’s talents. Vogt said the team prides itself on being disinterested in individual accomplishments, focusing rather on the team as a whole.

“We won because we played hard for each other,” Vogt said. “The thing about Ultimate is that it’s not like other sports. You can’t yell and scream and insist that players want it, work hard for it and enjoy it. Not everyone comes from an athletic background. … The trick is to convince everyone, to make them believe that setting goals with your teammates and working hard to achieve them is the most rewarding thing there is. Everyone on this team executed, and that’s why we have a trophy.”