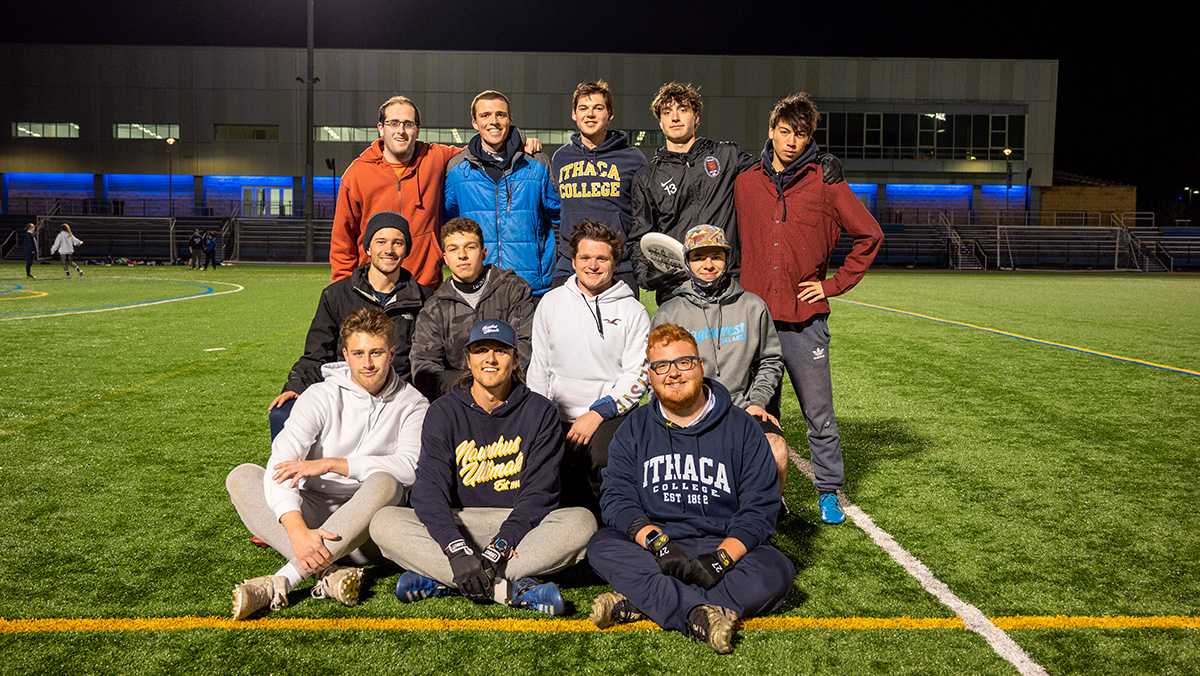 Lauren Lubenow/The Ithacan
The men's club ultimate frisbee team, Nawshus Ultimate, is currently ranked No. 13 in the country according to Ultiworld. The women's team, Kweezy Ultimate, was ranked at No. 22 at one point, but has since dropped off the list.
By Tommy Mumau — Sports Editor
Published: April 7, 2022

The tradition of ultimate frisbee on South Hill has grown over the years, providing students with an opportunity to connect and compete in a fun environment. This inclusive atmosphere has translated to success on the field, leading to both of the Ithaca College men’s and women’s club teams to reach the national rankings for the first time in their history.

The first Division III men’s and women’s power rankings for Spring 2022 were released by Ultiworld March 11, with both of the college’s teams landing spots in the top 25. This recognition came after the Bring the Huckus tournament Feb. 27, in which the men’s team, Nawshus Ultimate, defeated The Army University 12–4 and posted a 7–1 record in the event. The women’s team, Kweezy Ultimate, finished in seventh place, recording an 11–2 victory over The College of New Jersey. As the rankings have been updated weekly since initially reaching the top 25, the men’s team currently sits at No. 13 in the nation and the women’s team is no longer ranked, but it was ranked as high as No. 22.

The team name Nawshus comes from a story in which a former team captain told a referee that he was feeling nauseous in response to mishearing their question about what the team’s name was, sophomore Ian Donahue said via email. The women’s team name, Kweezy, is in response to the joke.

The first appearance in the national ranking for both clubs comes in their first season in two years, after the 2020–21 season was canceled as a result of the COVID-19 pandemic. Senior practice captain Lydia Lepinski said she is proud of the women’s team’s efforts to gain this recognition.

“We’ve been working really hard the last couple of months,” Lepinski said. “To be nationally ranked is super exciting and really rewarding.”

While this is the first time the teams have appeared in the rankings, the squads have been competitive in the past. Nawshus competed for a national title in Spring 2019, posting a second-place finish in the sectional tournament. The club also finished seventh at Metro East DIII College Men’s Regionals. Kweezy made an appearance in the USA Ultimate Division I Regional Championships in Spring 2012.

Junior practice captain Luke Pohlman said he is impressed with the way the men’s team has played thus far. He said the team’s accolades are a product of the collaborative effort by several members of the team, prompting the country to take notice.

“The entire team has been contributing to get us to this point,” Pohlman said. “We have some exceptionally talented guys on the roster, but everybody’s doing their part, both on the field and on the sideline, which has brought us success that we haven’t had before.”

Pohlman shares the practice captain duties with senior Stephen Welsh, as the duo is responsible for coaching the team and running its practices. Donahue said he has been pleased with the effort the team has been putting in to achieve this milestone.

“At practice, we’re always working on our skills and improving,” Donahue said. “We’re going over drills, over what we can do better … [At tournaments], we’re constantly communicating with one another, we’re adapting to what the other team is doing. And we’re working so well as a team.”

The teams compete in both the fall and spring, and also practices during the winter months. This spring, the teams competed in two tournaments prior to postseason play beginning in April.

Pohlman said the team has around 50 members, but averages around 18 people per practice. He said the team’s top performers include seniors Eli Robinson, Jack McShane and Justin Juchnewich, junior Elliot Mintz, and freshmen Nadav Berkman and Owen Young. Pohlman said the experience the team’s veterans bring to the table has elevated its performance on the field.

“Our more experienced players have been stepping up and helping coach up the younger guys, as well as kind of dictate play on the field,” Pohlman said. “That drastic increase in communication has just led to more success for the team.”

When the national rankings were first released March 11, the men’s team was ranked No. 23 but has since climbed to No. 13 with a victory in the New York Invite tournament March 26 and 27. Nawshus dominated at the event, sweeping the competition with a 4–0 record.

The women’s team also impressed in the tournament, winning a pair of games before losing to Skidmore College 13–6 in the championship round. Kweezy defeated Cornell University 13–3 in the play-in round and the University of New Hampshire 7–6 in the semifinals.

Lepinski is one of Kweezy’s two practice captains, along with senior Jaye Kayne. Lepinski said the women’s team practices three nights a week, a factor that has played a pivotal role in the team being ranked among the nation’s best.

Lepinski said the team has a variety of impact players that each bring something different to the table. Kweezy’s key contributors include graduate student Emily Mildner, sophomore Amelia Myers and freshmen Joe Mukamal and Grace Wang.

Along with the team’s talent on the field, its players have also developed a bond outside of the sport. Kayne said the team has an encouraging environment, which has helped contribute to its success.

“[Our] greatest strength is just the team chemistry that we have together,” Kayne said. “So like trusting in one another and supporting one another, and keeping each other in just a positive state of mind as much as we can.”

“The first friends I made in this school were from Kweezy and from the team, which made a huge difference in my own life,” Mukamal said. “It also gave me a good idea of how the whole school was. Everyone was very nice and funny and [had] great personalities across the board. And it really made me sure that this was a school that I wanted to be at.”

While the teams are primarily run by the practice captains, the club’s adviser is Matthew Klemm, associate professor and interim chair in the Department of History. Klemm said he played ultimate frisbee when he was in college and is proud of the team’s accomplishments this season. He said he attended one of Nawshus’s games in the fall and was impressed by the group’s camaraderie.

“One thing that really impressed me about them … [was] the spirit of the team,” Klemm said. “[They were] really encouraging to everybody, I think it’s really paid off for them to be ranked like this.”

Both teams will look to build on this positive energy as postseason play approaches. The sectional round of the playoffs will be held April 9 and 10 in Churchville, New York, leading up to the Division III College Championships on May 21 to 23 in Milwaukee, Wisconsin.