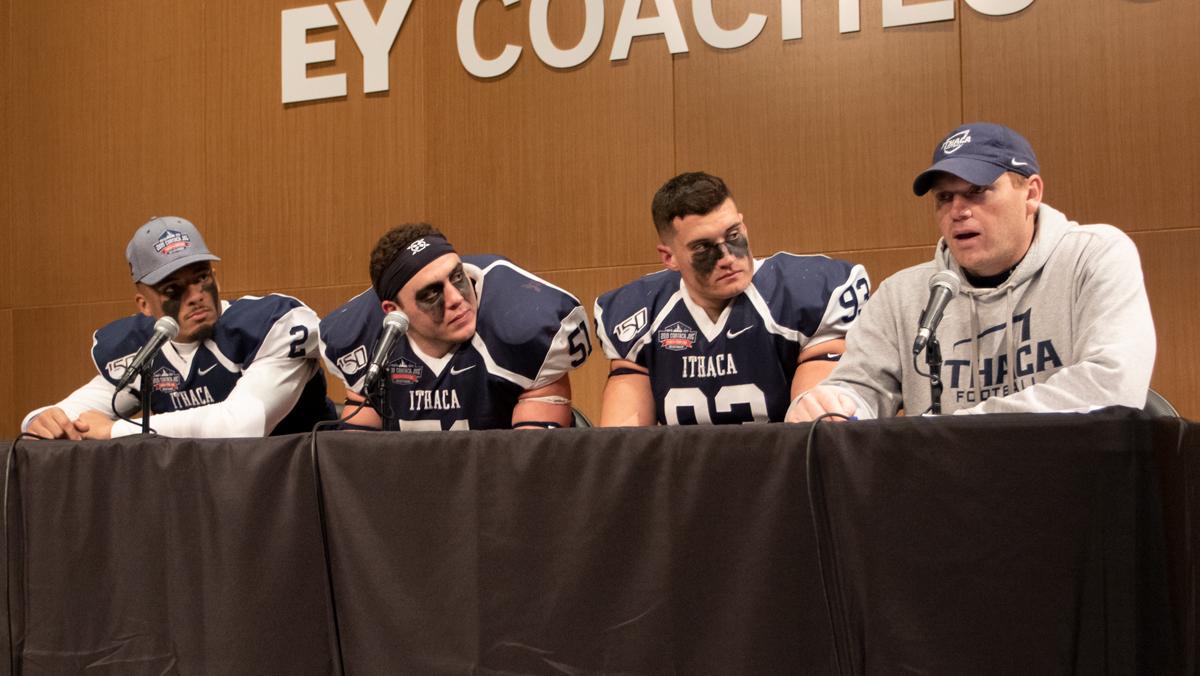 Head coach Dan Swanstrom said the biggest challenge for the South Hill squad was overcoming the back-to-back losses of the last two weeks against Union College 31–21 and Rensselaer Polytechnic Institute 38–12.

“I feel a lot of happiness for our guys,” Swanstrom said. “We’ve had a very trying couple of weeks, and this team was emotionally exhausted. I know what they were trying to do this year, and it was really hard to keep the focus in front of us in what we were trying to do and trying to accomplish.”

The Bombers were dominant offensively through most of the game, but they faltered slightly in the third quarter and early in the fourth, when Cortland reduced the Bombers’ lead to only six points. The South Hill squad answered with a bold play call that sent junior wide receiver Andrew Vito deep towards the end zone on third down with six yards to go.

“They were using their time outs, and I looked at our offense, and I told [the team], this is what I want to call,” Swanstrom said. “I didn’t get a great response at all, and I didn’t think anybody wanted to call it. I just felt we had a chance to really make it difficult for them to win if we hit it.”

Swanstrom’s call ended up being the right one. Senior quarterback Joe Germinerio complete the 46-yard pass to Vito to put the Bombers up 32–20, a score that held through the final whistle.

Senior wide receiver Will Gladney said Vito’s touchdown was the highlight of the game for him.

“Vito works so hard,” Gladney said. “From day one when he came in, we would stay after practice until we couldn’t see the football. On this stage, it was awesome to see him score that touchdown.”

Germinerio had one of his best games of the season, rushing for 163 yards — his highest total this season — and throwing for 251 yards. Swanstrom said the game plan relied heavily on Germinerio to execute.

“I knew we were going to ask a lot of Joe today,” he said. “He’s such a hard worker, and he wills himself to be a great quarterback. He’s got amazing dedication … and for him to go out and do it the way he did it with 34 carries and 27 passes, it says a lot about how he was able to stay in the game … and play really great football.”

Despite the loss, Cortland head coach Dan MacNeill and senior running back Zach Tripodi, a team captain, came into the conference with a smile on their faces. MacNeill gave credit to the Bombers’ offense for its performance against the Cortland defensive system.

“We knew the dangers when you play two deep safeties the entire game that you’re going to open up some run game,” MacNeill said. “We thought that was the best case scenario to take away their strength and then work from the back. I thought that was a good adjustment by them.”

Tripodi scored three rushing touchdowns in the game, but he still said he was disappointed in his performance. However, he also said that scoring in MetLife Stadium was an incredible experience.

“To come in here, the electricity is unreal,” Tripodi said. “When I scored, I don’t think I’ve felt something ever like that. You literally felt the crowd. It’s definitely an experience, and I’m sure everyone on the team felt the same way.”

“We got the Division I feel-type game, and to go out this way, I can’t even put into words,” Garone said. “I’m so proud of these younger guys that filled in for our eight seniors that graduated for us on defense. They really stepped up for us this week and throughout the whole season.”