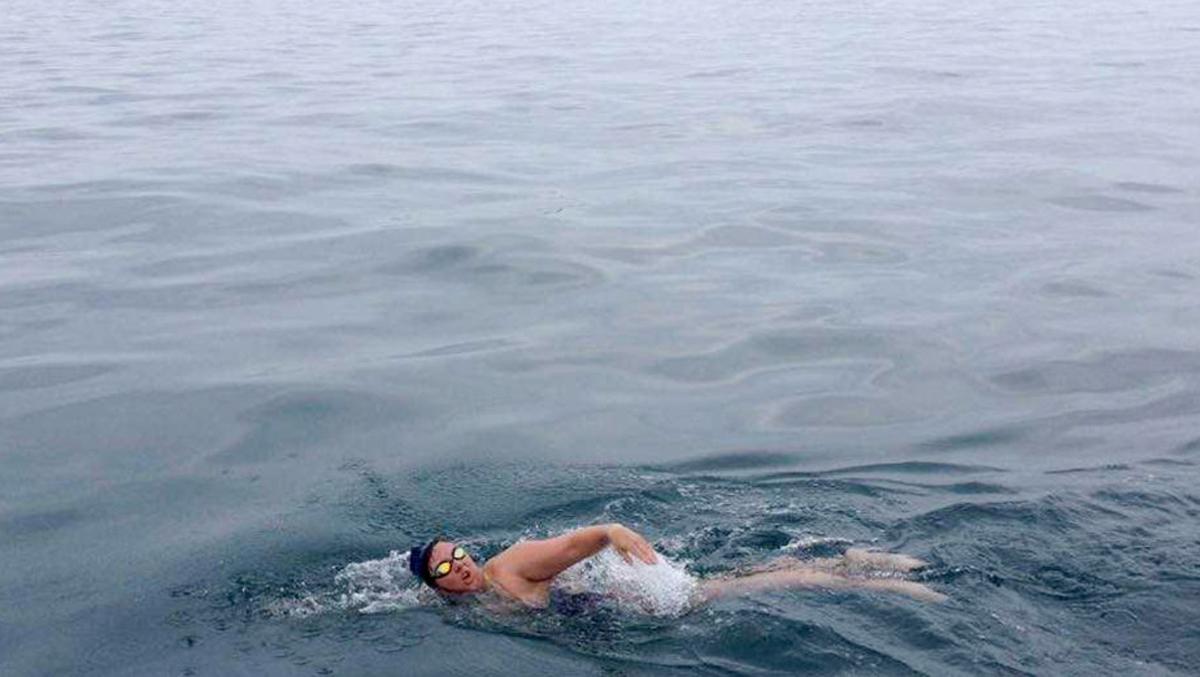 Photo Courtesy of Miranda Wingfield
Graduate student Miranda Wingfield is one of 61 people to swim the English Channel in 2018.
By Dani Pluchinsky — Sports Editor
Published: August 29, 2018

When graduate student Miranda Wingfield swam for Ithaca College, she was used to swimming in clear, heated water inside the Athletics and Events Center. However, at 5 a.m. July 20, Wingfield found herself staring into a new challenge: the murky, frigid water of the English Channel.

Her goal? Make the journey from the shores of southern England to northern France in less than 14 hours.

Throughout history, only 1,887 people have completed solo swims across the English Channel. Wingfield is currently 1 of 61 to successfully swim the English Channel in 2018. To complete the journey, a person must swim 21 miles from southern England to northern France. Since Matthew Webb first swam the channel in 1875, 10 people have died while attempting to complete the challenge.

“When I went to Australia, I did more open water swims and I realized there’s a lot more than just pool swimming,” Wingfield said. “I thought a good way to end things would be to do a really challenging swim.”

During her training, Wingfield said she had to learn how to swim in open water and that it was different from swimming in a pool.

“I did a lot of open water swimming and tried to get acclimated to cold water because the temperature wasn’t as warm as most bodies of water around here,” Wingfield said. “Last summer, I spent the summer in Chicago for my clinical, so I swam in Lake Michigan a bunch.

After she booked her day to swim the channel, Wingfield and her family flew to England. When the day arrived, she woke up at 3 a.m. to make sure she was on her boat and ready to swim by 5 a.m. When she started the swim, her crew piloted the boat next to her so she would always know what direction she was supposed to be swimming.

Before anyone swims the English Channel, Wingfield said that every swimmer must complete a qualifying swim of six hours in temperatures below 60 degrees to make sure their body can handle the cold. Besides the potential hypothermia, there is also the danger of being stung by a jellyfish or inhaling fumes from the boat. Wingfield said even though she was aware of the risks, she did not let them phase her during her swim.

“I knew a few dangers, but I put them in the back of my head,” Wingfield said. “I was not worried about any of those things because I kept telling myself, because I know people have died doing it, if something goes wrong, there are going to be a lot of people watching and they’ll be there for me.”

Wingfield said while swimming the channel, she had to eat in order to fuel her body to complete the grueling journey. She had her first meal, which she calls a “feeding,” after the first hour of being in the water. Her meal was typically a water bottle filled with water and Carb Pro, a powder that provides a high amount of energy. She said that because the boat was not allowed to pull her in any way while she was in the water, her water bottle was tied to a 100-foot rope that would be thrown into the water for her.

Wingfield said not only did the feedings provide her the energy to keep going, but they also made the swim go by quickly.

“My feeds were about a half hour in between each one,” Wingfield said. “I could keep track of how long I was in the water because of how far away my feeds were.”

During the fourth hour of the swim, Wingfield said she became so cold that she had to tell her boat crew to begin warming up her nutrient-rich water bottles. It got to the point where she said she was looking for anything to distract her from the cold.

By hour nine, Wingfield said that she was starting to feel delusional.

“I couldn’t figure out what direction I was going,” Wingfield said. “I could still make out land in the distance, but it didn’t seem like it was getting any closer. I felt like I was swimming in circles but then I knew the boat had the right directions, so I kept going.”

Wingfield said she regained her sense of direction again when her crew told her she had 3,000 meters left to swim. The remaining part of the swim took over an hour and she said she was ecstatic to finally touch land again.

While Wingfield was conquering the water, onlookers like Jennifer Francisco, a graduate student and former swimmer for the college, said she made the feat look easy.

“She has such an effortless look to her strokes. She makes it look like swimming 26 miles is easy,” Francisco said. “She never complained. She just kept going the whole time with a brave look on her face.”

Paula Miller, head coach for the women’s swimming and diving team at the college, said Wingfield swimming the English Channel was a major accomplishment for the program.

“I am beginning my 35th year as the head women’s swim coach and to my knowledge, she is the only swim alum who has successfully conquered the English Channel,” Miller said. “I am so proud of Miranda for not only doing the actual swim but also in the way she trained for the year.”

In the future, Wingfield said that she is going to take a break and swim for fun, but swimming the channel again is a possibility.

“I think that if I swim it again, I would do a double crossing just so I did something more and different than the last time.”