As the gymnastics team waits outside the Ben Light Gymnasium doors to begin its ceremonial march into the first home dual-meet of the season, senior Jessica Bolduc momentarily steps away from her teammates to receive hugs and wishes of good luck from her parents — a tradition that has preceded each of her meets since she was 3 years old. 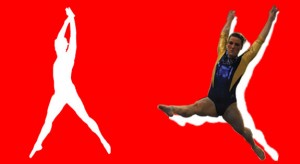 Bolduc’s parents, Rick and Ronnie Bolduc, have attended every one of her meets since she began her career as a gymnast at the YMCA in her hometown of Darien, Conn. They have traveled as far as Saint Paul, Minn., and drive more than four hours to see her compete in the Bombers’ home meets.

Bolduc said her parents relax her when she’s competing in all her events, which include the vault, uneven bars, floor exercise and balance beam.

“I don’t expect them to always be there, but they  bring a sense of certainty,” she said. “One time they said they couldn’t make it, but they took a red-eye flight and
really surprised me, and that means a lot.”

Ronnie said her career as a nurse often makes it difficult to get to meets, but she and Rick always find a way to be there before their daughter marches in with the team.

“Sometimes I only get a couple hours of sleep over a two-day span because I work between 5 at night and 8 in the morning and drive up for the meet,” she said.

Ronnie said she got Bolduc involved in gymnastics not only to fulfill her nursery school’s physical education requirement, but also as a way to treat her hyperactivity and build her confidence in a competitive environment.

Bolduc began doing routines in national competitions when she was as young as 5 years old and was a member of the YMCA’s club gymnastics team at the age of 11. The squad consisted mostly of girls in their late teens.

Bolduc said the stringent team environment her Russian coaches encouraged caused her interest in the sport to dwindle over time.

“There was no music allowed in the gym, no cheering and no positive affirmations,” she said. “It was just reverse psychology all the time, so it was really difficult to be able to pick myself up when I was down.”

Ronnie worked as an administrator for the team, organized all their travel and competitions in addition to ordering their leotards. Bolduc said her mother motivated her to continue with the sport despite the constant criticism from coaches and older teammates who would often make fun of her.

“My mom always told me that it was just because I was the youngest one there and had to earn my spot,” she said. “She would tell me the other girls were just jealous.”

As the end of her tenure on the YMCA club team approached, Bolduc was ready to accept an athletic scholarship and compete for the gymnastics teams at colleges far from her hometown, such as the University of Alaska.

But a serious injury changed her outlook on gymnastics once again. Bolduc suffered a bulging disc in her back when she fell in her bar routine on the second day of a national competition in Sheboygan, Wis. It was the last meet she competed in with the Darien YMCA club team.

Bolduc said she didn’t feel much initial pain right after her fall in the bars event.

“My legs would just give out and my whole body was numb when I tried to move,” Bolduc said. “I was able to finish the bars, but I just collapsed afterward and my dad had to hold me until the ambulance came.”

The injury confined Bolduc to a wheelchair for a few weeks before she came to Ithaca College as a freshman. She joined the Bombers following the injury because her parents encouraged her to focus on a new chapter of her life. Head Coach Rick Suddaby created a more supportive environment where teammates could feed off of one another, she said.

“Everyone was just very welcoming and not pushy at all,” she said. “I could see everyone’s enthusiasm and I was used to hanging out with older girls already.”

Bolduc played off of her teammates’ encouragement and kept in weekly contact with her parents on her way to All-American honors in three events during her freshman year. She was the best in Division III last season in the floor exercise, finishing with a score of 9.75.

“If she gives it the effort to go to practice every day and train year-round, the least we can do is come here and support her all the time,” Ronnie said.

Bolduc said her parents’ support helped her recognize her ability to be a part of something larger than herself, which outweighs the soreness and back pains that often accompany every meet.

“I’ve been dealing with pain my whole entire life, so they’ve gotten me to the point where I don’t really know when to stop or slow down,” she said.

Bolduc’s high energy level and spontaneity led her roommates to nominate her as a contestant in the Senior Class’ Mr. and Miss Ithaca Pageant in October. Sophomore Kate Woodward said events like this often bring out Bolduc’s sarcasm and sense of humor outside of the gym.

“Whenever I feel like I’ve failed and needed to rebound with anything, she just always knows how to lighten the mood, and I look up to her for that,” Woodward said. “No matter the situation, she can always focus her aggression on something positive.”

Rick said Bolduc’s ability to use doubt as a motivating factor when rebounding from failure is her best attribute.

When Bolduc looks into the crowd after landing each combination, she’s certain she will see her mother and father applauding in the front row of seats in the gym. Rick said he and his wife attend every one of Bolduc’s meets because they enjoy seeing how Bolduc’s paths to victory in all four of her events unfold.