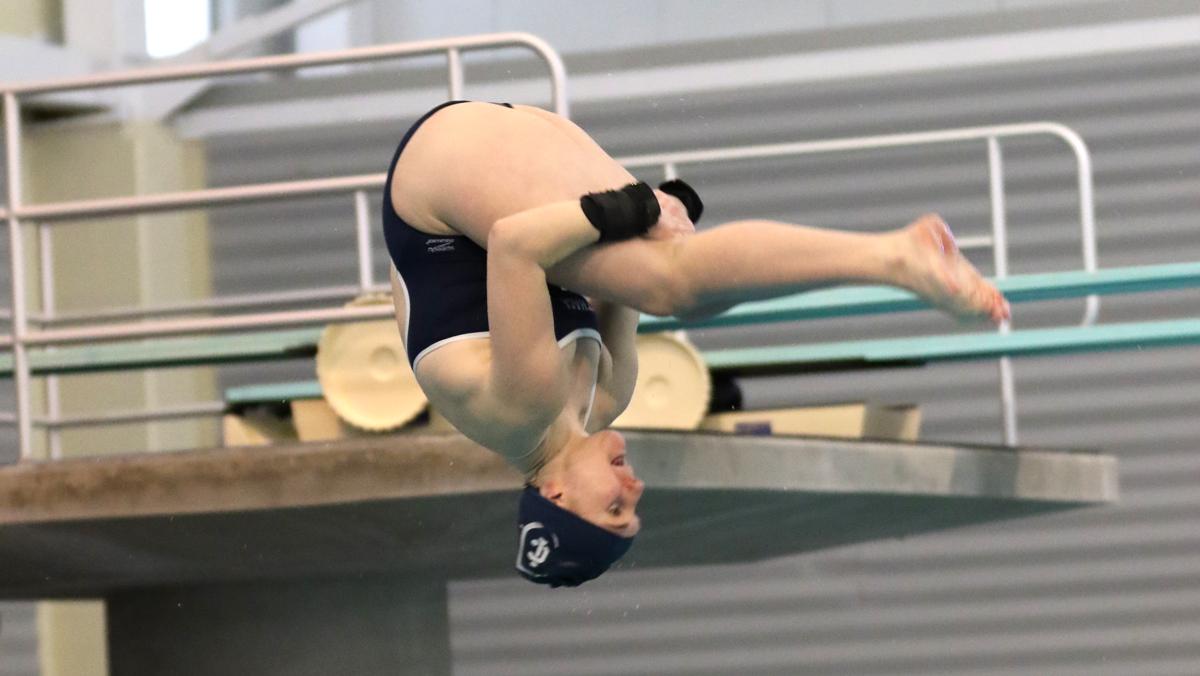 Sometimes, graduate-student diver Anna Belson would be sitting in class taking notes when, unknowingly, she would have an absence seizure. She would continue taking notes, scribbling over everything she had previously written. When she came out of it, she said, her notes looked like hieroglyphics.

Belson, who is entering her fourth season competing for the Ithaca College women’s swimming and diving team, has never competed in a full season of diving due to various medical reasons. Regardless, Belson has qualified for the NCAA Division III Swimming and Diving Championships every year.

In her last year as a diver at the college, she is pushing past her adversities and planning to finish the season entirely.

“Individually, I want to go back to nationals, and my goal is to make finals on both boards,” Belson said. “This year, I’m going to make it the whole season.”

Her freshman year, Belson missed the first half of the season due to a broken foot. She began diving at the Bomber Invitational on Dec. 5, 2014. That year, she earned All-American honors for finishing 10th in the 3-meter dive at nationals. The following year, she dove until the Bomber Invitational but had to stop because of more health issues. She made it back to dive at nationals again, where she earned a fourth-place finish on the 1-meter board and on the 3-meter board.

After taking her junior year off to study abroad and focus on her health, she returned for her senior season but did not start diving again until the Bomber Invitational. Belson said that starting her sophomore year, she experienced difficulty staying awake and was having seizures, but the cause of the problems was not discovered until her senior year.

“I got back from the training trip and was very fatigued and tired, and the one practice, I passed out after doing a hard set and was unresponsive,” Belson said. “It kept escalating, and I was having seizures and heart problems.”

In December 2017, Belson said, she took an electroencephalogram, a test to check the electrical activity in the brain. When she took it, doctors told her she had severe sleep apnea and would stop breathing while she was sleeping. When someone stops breathing while they sleep, their brain continues to be alert. This caused her sleep cycle to alter, and her brain would never get any rapid eye movement (REM) sleep, an essential period of sleep activity that stimulates parts of the brain.

“You can only survive 11 days without REM sleep, and so, for every eight hours of sleep, I was only getting two,” Belson said. “I was trying to live a baseline of two hours of sleep per day. I was constantly so tired, and when you don’t get any sleep, your body starts shutting down, and that’s why I was having nonepileptic seizures.”

Belson said she currently takes medicine to help her stay awake during the day. When the cause of her sleep apnea was unknown, she said, she would constantly fall asleep in class and would even fall asleep during her exams. At the beginning of her senior year, she said, she was failing every exam she took and had to learn how to adjust.

“I wouldn’t know what happened and my classmates kept me awake — they would hit me to wake me up,” Belson said. “I took my exams during the afternoon when I was awake versus at 8 a.m. when I was more likely to fall asleep. I took them in bright lights, and the professors worked with me, and they were very accommodating.”

Barbara Belyea, clinical professor and associate chair of the Department of Physical Therapy, had Belson for her Musculoskeletal Examination and Evaluation course and is her academic adviser. She said it was amazing to watch Belson continue to strive academically.

“Anna was always really honest and forthcoming about what she was dealing with,” Belyea said. “We knew she was going through some really challenging issues health-wise, and we tried to support her as best we could.”

Because doctors were able to figure out the cause of her health issues, Belson was able to start taking medication to help control her symptoms and finish off her senior year of diving with a bang.

Last year, Belson was one of five divers from the college to qualify for nationals in Indianapolis. She joined graduate student Nickie Griesemer and then-seniors Lindsey Suddaby, Katie Helly and Alyssa Wishart as five of only 29 divers to make it to the championships. Belson finished 12th in the 3-meter and 13th in the 1-meter. For Belson, she said her favorite part was competing with her teammates.

“To have four other teammates by my side was an experience that I will never forget, and I am so thankful for it,” Belson said. “Watching Lindsey get to the finals and Nickie win both boards — it’s one of the best moments of my life because I got to be next to the people that have made my life so successful.” 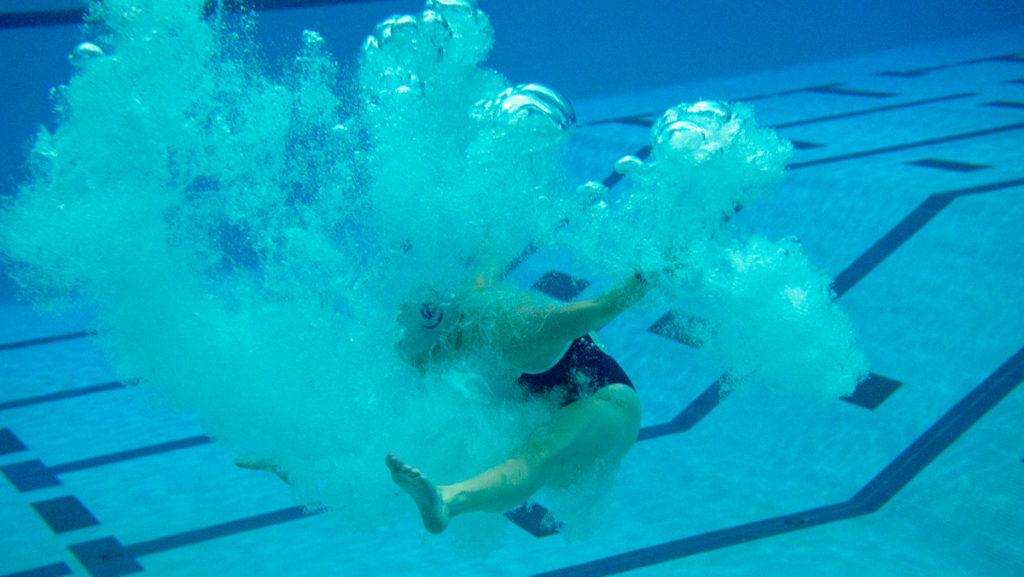 Head diving coach Chris Griffin said Belson’s ability to always put others before herself helps her dynamic with the team.

“Her sophomore year, she won Diver of the Year at the Empire 8 meet,” Griffin said. “Immediately after receiving that award, she handed it off to a young woman who did not receive it but was deaf and had overcome a lot of difficulties in herself, and Anna felt she deserved it. That’s the type of person Anna is.”

Belson said that with everything going on, she still tried to find a way to dive. She said she would show up to every practice and competition she could attend to try and compete.

“Diving is the one place where I can reduce stress,” Belson said. “Every minute I worked out counted. I wasn’t able to build muscle because my body was fighting to keep itself alive. I didn’t do any unnecessary activities that wasn’t directly related to diving.”

Belson said the goal for the team this season is to send at least six divers to the regional meet. She also wants to make sure that the college’s diving program remains a powerhouse.

“I hope they continue to look at us that way, and they know not to mess with Ithaca College diving,” Belson said. “We can have so much fun, and we can dance and sing and laugh but at the same time, destroy them with a smile on our face.”

Besides being on the diving team and taking graduate classes, Belson works at the Robert R. Colbert Sr. Wellness Clinic. Sophomore teammate Jocelyn Pawcio said she admires Belson for balancing everything in her life.

“It can be easy to carry over negative emotions from a full day at school to practice in the evening, but Anna’s compassionate and hardworking personality rises over these issues to motivate the team and be in the moment,” Pawcio said. “In my opinion, being able to juggle all of these things at a supreme level is very telling of her character and leadership skills.”

Belson said that, throughout her four years, she would not have been academically and athletically successful if it had not been for the constant support system in her life.

“What my teammates were able to do for me, you could not find that truly anywhere else,” Belson said. “Everything from picking me up in the morning to make practices and holding me when pieces in my life were falling apart. It had nothing to do with me, and it was everything to do with everyone else.”

Belson said she intends to finally compete in her first full season of diving to cap off her career at the college.

“I can positively say that I am so much better than I was last year,” Belson said. “To come out of the season and being able to compete the whole season, it’s a ‘we made it’ and a ‘thank you’ to everyone who has helped me.”

CORRECTION: This story previously stated that Anna Belson had narcolepsy. It has been corrected to say that she has sleep apnea. The photo also misidentified Anna Belson and was changed to accurately identify her.