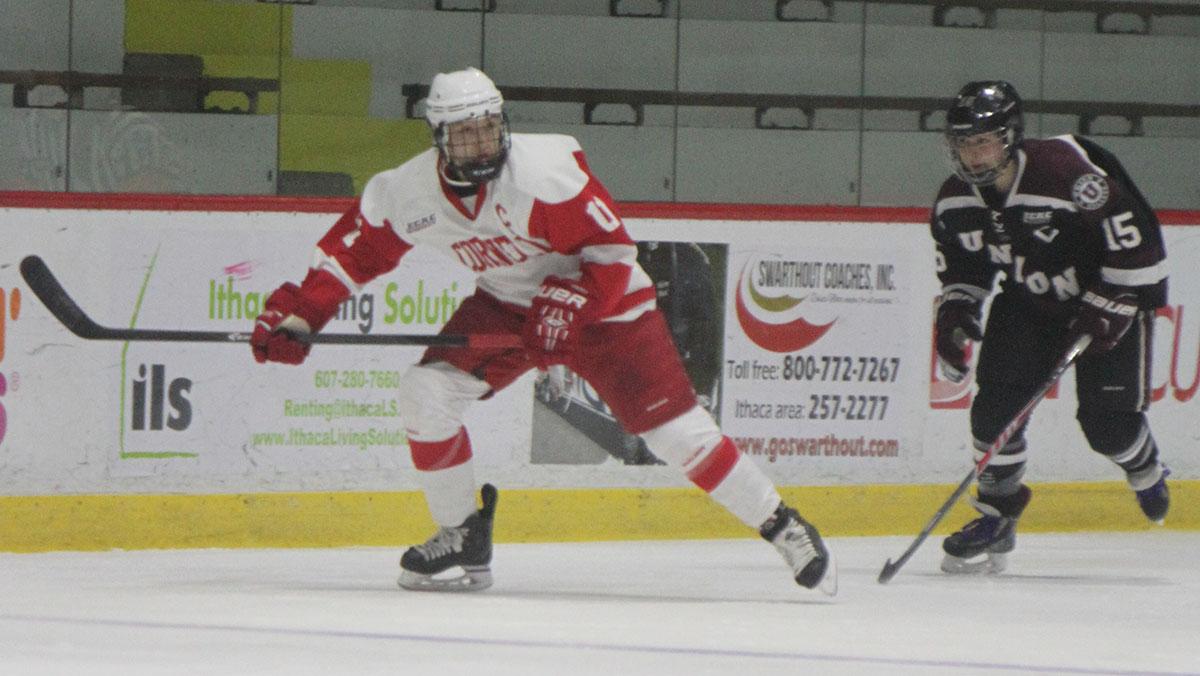 Cornell University women’s ice hockey forward Brianne Jenner steps out onto the ice for the team’s afternoon practice Jan. 27. Jenner quickly skates one full circle around the ice and picks up one of the many pucks that lay scattered at the far end of the rink. She skates up the right side, picking up speed, and fires the small, weighted disk into the top-left corner of the empty net. A shot that she’s taken hundreds of times opens up yet another practice.

Seven months ago, the Canada native wore a red jersey not for the Big Red, but for her home country. With less than 4 minutes to go, the Canadian National Team was down 2–0 against the United States in the gold medal game.

Jenner carried the puck up the left side of the ice. Crossing the blue line, she dodged U.S. forward Brianna Decker, pulling the puck into the middle of the ice in front of the net. Jenner released the puck quickly — a movement not unlike the shots she is so used to practicing at Lynah Rink during Cornell practices. The puck hit U.S. defenseman Kacey Bellamy in the right knee and was redirected into the net. Jenner threw her hands up as her linemates came to celebrate with her. She had put the team back in the game, and contributed to Canada’s comeback 3–2 overtime victory en route to the Olympic gold.

Jenner has had an outstanding hockey career on paper. The 23-year-old has played for numerous Team Canada teams, playing in the International Ice Hockey Federation World Championships in 2008, 2012 and 2013. In her junior season, she also played for the National women’s team in the 4 Nations Cup. She was centralized twice by the Canadian Senior National team, trying to make the roster for the 2010 Olympics in Vancouver, Canada — where she was one of the final few cut when establishing the roster — and again in 2014.

As a resident of Oakville, Ontario, hockey has been a part of Jenner’s life since she was very young. Her parents, who she said are as generous and supportive as they come, have allowed her to achieve her dream and don’t miss many Cornell home games despite the four-hour drive. Her dad, who played for the University of Toronto in the 1970s, and his brother ran hockey leagues that helped Jenner discover her passion for the game.

But Jenner said despite her achievements on the national and international level, she loves playing hockey in the collegiate setting.

“I was always kind of looking forward to coming down and playing Division I hockey,” she said. “I’ll definitely be going back to Canada, and I’m very proud to be from there, but there is something to be said about NCAA hockey, and that’s why a lot of girls are coming down. … I started looking at Ivy League schools, and if you have the opportunity to come to a school like Cornell, it’s hard to pass that up.”

Jenner has earned numerous awards during her time playing for the Big Red. Throughout her career, Jenner has been named the Ivy League Rookie of the Year, was placed on the Eastern Collegiate Athletic Conference All-Rookie Team and three times on both the first team All-ECAC and the first team All-Ivy League. She was named Ivy League and ECAC Player of the Year and was twice placed on the ECAC Tournament All-Tournament Team.

In her first two seasons for the Big Red, Jenner scored more than 50 points and finished her junior year with 70 points, putting herself in the school’s record books for her 35 goals and 35 assists. Jenner has a career +134 rating and scored seven game-winning goals as a junior, the most in program history for a single season. In that same year, she scored the second-most points per game and goals per game in the nation.

She then took what would have been her senior year off from Cornell in order to compete in the Olympics, and has returned this season as a fifth-year senior.

A government major at Cornell, Jenner said she hopes to continue school and plans to apply to graduate school in the coming years. Academics are something that were always important to Jenner, which contributed to her choice in Cornell University, but, for now, she said she wants to keep playing hockey.

Jenner’s list of accolades will unquestionably grow as her career continues, but she said it is not by this list that she measures her success in the time that she’s been playing hockey.

Though she began as an athlete who participated in many sports, she chose to focus on hockey when she entered high school. Jenner said she liked being an all-around athlete, but knew she would have to give up her other sports if she wanted to turn her passion into a dream she could attain.

“I knew hockey was my passion,” Jenner said. “I think when anyone finds that passion, it’s just something they want to keep in their life and do every day. … I knew that if I wanted to get anywhere in something specific I would have to dedicate time and make sacrifices. It’s just a part of it.”

Jenner said the reason she loves hockey the most is because it serves as an outlet from everyday life.

“You could be having the worst day ever, and you come to the rink, and when you get on the ice it doesn’t matter,” she said. “At the end of the day you have to have perspective that it’s just a sport, but I think for a lot of us it means much more than that. There are so many great experiences I’ve had because of hockey. I owe a lot to it.”

The 5’9” center has a presence on the ice. She skates with tenacity that is visible from the stands, and is clearly confident in her abilities, which she said she works hard every day to expand and improve. But much of the game seems to come naturally to her as well. Jenner knows what to do with the puck, without the puck, in whatever might be happening on the ice.

This year, Jenner is serving as the captain of the Big Red. Freshman forward Morgan McKim said despite only playing with her for one season, she has already learned from her when it comes to being passionate and wanting to succeed.

“She leads by example on and off the ice,” McKim said. “On the ice, you want to play like her, and off the ice you want to be like her. Every day, Monday, Tuesday, game day, you name it: she’ll be the first one on the ice and the last one off.”

Freshman goaltender Amelia Boughn’s hometown is about an hour away from Jenner’s, and she said she was able to develop a relationship with her captain prior to coming to Cornell, which was very special for her. Boughn said Jenner is one of the best captains she has played with and has learned just from watching her.

Senior forward Emily Fulton has been playing with Jenner for four years, and said Jenner has many great qualities that make her fun to play hockey with, but her leadership is the most important.

“She makes the players around her better,” Fulton said. “It’s hard to say that with everyone, but she just seems to do it in a way. It’s easy to play with her, it’s fun and she likes to have fun too when we’re on the ice, but when that moment comes she’s serious, she’s in the moment she’s ready to go.”

With only two more home stands left in the team’s regular season, Jenner said when it came to looking back on her Cornell career, she would remember it as an experience that impacted her positively.

“I’ve played on a lot of great teams and played in packed arenas in Toronto and Montreal and all over the world, but I think the college environment is really special,” she said. “To have the same fans out every weekend and to have the band, just the atmosphere. I’ll just cherish the games at Lynah and there aren’t many college programs that have a following like we do and I think we’ve built that. … I think we’ve created a culture [in Ithaca] for women’s hockey.”

Jenner describes her experience at the Olympics as the pinnacle of her hockey career thus far. She said walking out alongside some of the women she watched play in the Olympics in the past was something that, for her, was an unforgettable moment. But she said she won’t measure her success by this. While some might see her success on the surface for what it is, she will remember her success differently.

“I think when I look back at my hockey career when I’m retired, I’ll find it a success if all my teammates say, ‘She was a good teammate, she was great to play with, she made others around her better,’” she said. “I think if someone says that about a hockey player, that’s one of the highest compliments.”