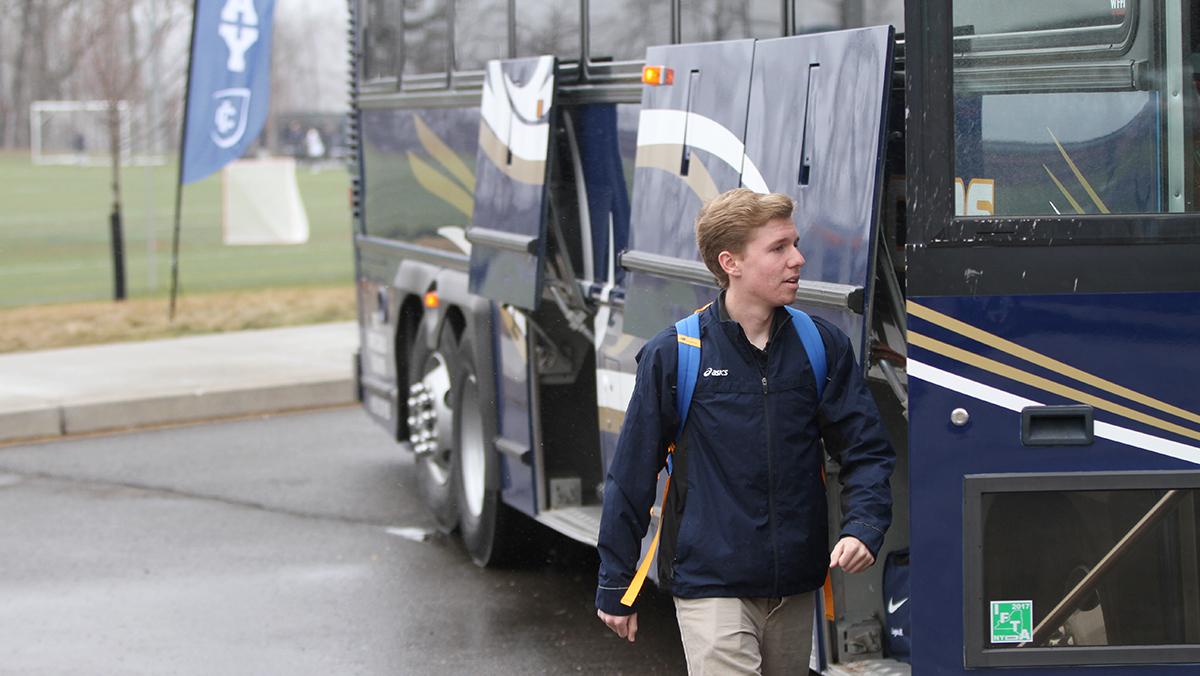 Creating the schedules for Ithaca College’s 27 varsity athletic teams and 44 club teams is not a straightforward process, but one that involves traveling, in-person meetings and conferences with other Division III administrators.

The scheduling process at the college starts with Will Rothermel, associate director of the Office of Intercollegiate Athletics. He attends conferences alongside other athletic directors in the Empire 8 Conference to make decisions and vote on the proposed and finalized schedules for the athletic teams in the conference.

During these conferences, Rothermel said, one of the first things they discuss is “scheduling philosophies.” These philosophies are intended to minimize missed class time, emphasize locality between competitions and maximize competitiveness among opponents.

“Typically you’ll [generate a schedule] in more-than-one-year increments,” Rothermel said. “You’ll come up with a plan for three or four years out so there’s some continuity.”

Coaches provide feedback on the schedule they receive from the conference, discuss it with the administration and agree upon it as an institution.

The athletic director brings the changed schedule back to the conference meeting, and a vote is conducted for finalization. These conference meetings deal solely with schedules for the league matchups. Scheduling nonconference games is a part of the process the coaches take care of.

“We’ve given them flexibility, and the onus is on them to consult with us as administrators,” Rothermel said.

Factors that coaches must discuss with the administrators on their nonconference choices include how competitive of a schedule they want, which teams they want to play and what regions they will play that will potentially lead to recruiting future athletes.

Many of the college’s athletic teams travel to places around the country during breaks.

The men’s and women’s tennis teams traveled to Orlando, Florida, during their 2017 spring break. Head coach Bill Austin said it is important to challenge the team in nonconference matches.

“[It’s] something that’s going to produce a good–quality match for both teams and push you competitively to prepare you for conference play,” Austin said. “I think that’s always how I’ve tried to look at it.”

The scheduling process for collegiate athletics is no simple job. Both Rothermel and Austin come across difficulties while they are creating schedules. Rothermel’s more recurrent problem is keeping everyone satisfied with the given schedule of the year.

“Everyone’s not going to be happy every year,” Rothermel said. “But I think it balances out the next year.”

Austin said finding dates that work for both him and the other schools, balancing the number of matches within a period of time and making sure he remains cognizant of the other teams that use the Athletics and Events Center are the main problems he finds when scheduling his nonconference matches. Because tennis matches take up to a few hours at a time, Austin wants to ensure the A&E Center is used fairly among the teams.

He first works around his conference schedule, and then he looks at other schools’ schedules to make sure they have open days for competition.

Mike Ariel, facilities coordinator and pavilion manager in intercollegiate athletics, receives the finalized athletics schedules when each team knows whom and when it is playing and then analyzes them to determine the times in which events will happen.

“Each venue is going to be slightly different,” Ariel said. “It’s going to be based on the size of the program and the flexibility we know each program has on moving or adjusting game dates or times.”

“The most difficult thing is everyone wants the very same exact time in the same venue,” he said.

Scheduling two teams in one facility at the same time is how he solves those types of problems.

For instance, tennis and track and field frequently share the Glazer Arena because they are both able to have a suitable time slot while having the appropriate space to practice.

Although the athletics office has developed a general process over the years, it still comes across a few bumps. The next bump for Bomber athletics is its transition into the Liberty League Fall of 2017.

Transitioning into a different league will bring new challenges to the scheduling process because every league schedules its athletics differently, Rothermel said. In the Liberty League, for example, scheduling both conference and nonconference matches for tennis will be up to the coaches, which will give more to Austin to schedule.

In tennis, Liberty League guidelines require teams to play each conference team once, unlike most other sports. Because of this, they have much more flexibility in their schedule and can play in the fall and spring seasons. The coaches are able to schedule their matches for any date, time and location, as long as both coaches agree.

Finding a balance between departments and within departments is what ultimately makes scheduling athletics successful, Rothermel said, with a focus on having athletes miss as little class as possible.

“It’s not just a simple ‘OK, here’s the schedule. It’s posted,’” Rothermel said. “I think [the scheduling philosophies] is a lot of what the foundation of Division III athletics is founded on.”

Columnist Jonathan Beck examines the positive aspects of the new media policy implemented by the Department of Intercollegiate Athletics in December 2015.