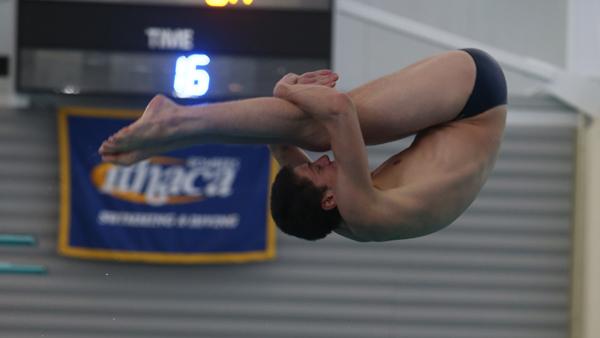 The men’s and women’s swimming and diving teams dominated this weekend’s events, winning the Dick Comanzo Memorial Invitational and a dual meet against Alfred University.

At the dive meet, junior Korie Fackler and sophomore Matt Morrison swept the events. Both of them also set the school and pool records on the three-meter board. Morrison said his goal for the meet was to get the pool and school records.

“I thought it was going to be really hard, so I kept that in mind so that helped me get it by a lot,” Morrison said. “I wanted both of them, the pool and the school record, today and it worked out.”

The team competed in two events in two days. While Fackler said working off of back-to-back meets was hard, she said the team can handle it because they are mentally tough.

“I’m tired, but right now we are so mentally focused and getting really comfortable with our dives so we can basically run on zero and do well,” Fackler said.

The teams are just two meets away from the Empire 8 Championship Tournament. Senior captain Martin Brown said he was extremely happy with his team’s performance, especially at this point in the season.

“We have blown past our expectations because there were two pool records just broken,” Brown said.

This week, the men improved their record to 14—1 on the season as five athletes either won two individual events or were part of a relay team that won an event. The final score of the meet was 184-103.

The women remained undefeated on the season by putting up a score of 197-98. The Bombers won 12 events out of the 16. Senior Carly Jones led the way with two individual 1st-place finishes as well as a 1st-place finish on a relay.

Both teams will travel to Schenectady, N.Y., for a dual meet against Union College on Saturday.