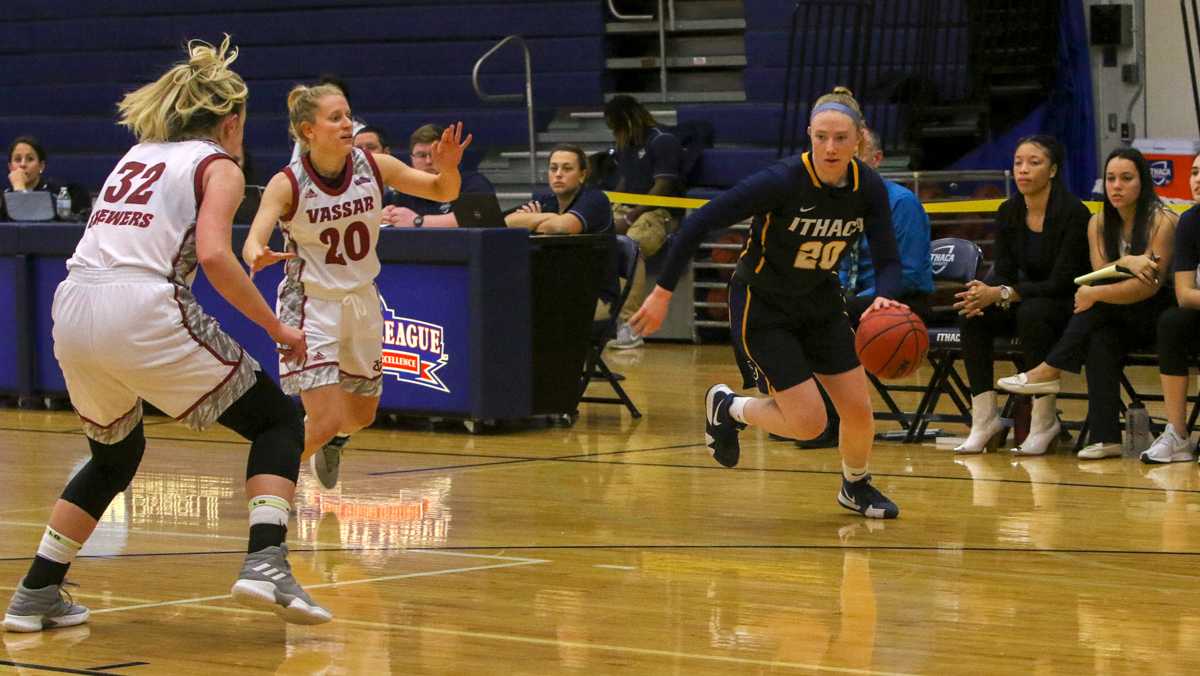 Junior guard KellyAnne O’Reilly spent her first two years of college suiting up in green and white for Manhattan College, a Division I school. Now, she is spending this season wearing blue and gold.

O’Reilly, who is studying exercise science, came to Ithaca College at the start of this year to play on the women’s basketball team. O’Reilly transferred from Manhattan College in New York City after deciding she needed to focus more on academics but still play basketball.

“I just wanted a better all-around experience,” O’Reilly said. “I saw Ithaca as a way that I could get the degree that I wanted and really put myself in a good position to go to grad school. It’s a more balanced setting.”

O’Reilly said focusing on her studies in exercise science is a priority, which she noticed was not being fulfilled to her liking in her time at Manhattan. Transferring as a junior was not the ideal situation for O’Reilly, but she decided that it was something that would benefit her life after college. Even so, she did not want to leave after just one season, so she stayed for another year Manhattan College.

“Much of [the transfer] was driven through exercise science,” O’Reilly said. “I was leaving for basketball, but I knew I had to prioritize my education.”

Over two seasons, O’Reilly played in 52 games at Manhattan, scored 89 points and had 19 assists. Her total playing time was 442 minutes.

In her first five games with the Bombers, O’Reilly had 45 points and eight assists over 75 minutes of play.

O’Reilly said she credits the basketball program at Manhattan for teaching her lessons that could not be taught in the classroom.

“I think, primarily, I learned the importance and the ways to be a good teammate because your life is so centered around basketball,” O’Reilly said. “I learned the little things to help your teammate out.”

O’Reilly said she hopes to contribute to the team with knowledge and expertise and pass that on to her teammates.

“I hope I bring an intensity and competitiveness,” O’Reilly said. “One of my greatest assets is my basketball IQ.”

One thing that Raymond said he noticed immediately about O’Reilly was her knowledge and experience surrounding basketball.

O’Reilly’s work ethic and determination caught the eye of Raymond early on in the preseason.

“She does extra work all the time,” Raymond said. “In the preseason, she was coming in three days a week at 7 a.m. to do her own workouts.”

O’Reilly’s personality differs from some others on the team, a difference that Raymond noted is a positive thing for the team dynamic.

“Her personality is not as outgoing as many of the players, which is a good thing,” Raymond said. “She brings a balance. We don’t need all extroverts.”

O’Reilly’s teammates noticed her level of intensity almost immediately. Senior guard Annie Giannone said she believes O’Reilly’s experience in a Division I program definitely influenced her basketball IQ.
Giannone said O’Reilly is a smart and strategic player on the court.

“She picks up on things before they even happen,” Giannone said. “She is always just giving it 110 percent when she plays, which is fun to see.”

O’Reilly said her work ethic was the reason she was able to make it on the Manhattan roster in the
first place.

“That’s how I got to Manhattan,” O’Reilly said. “I really took pride in how much time and dedication I put into basketball just because I enjoyed it so much.”

Giannone said she is excited to see what O’Reilly will bring to the court and to the team as a whole.

“When she started playing with us, I knew it was going to be an exciting year watching her play,” Giannone said. “I knew she’d fit right in, and she’d bring so much to us. We’re very lucky to have her.”