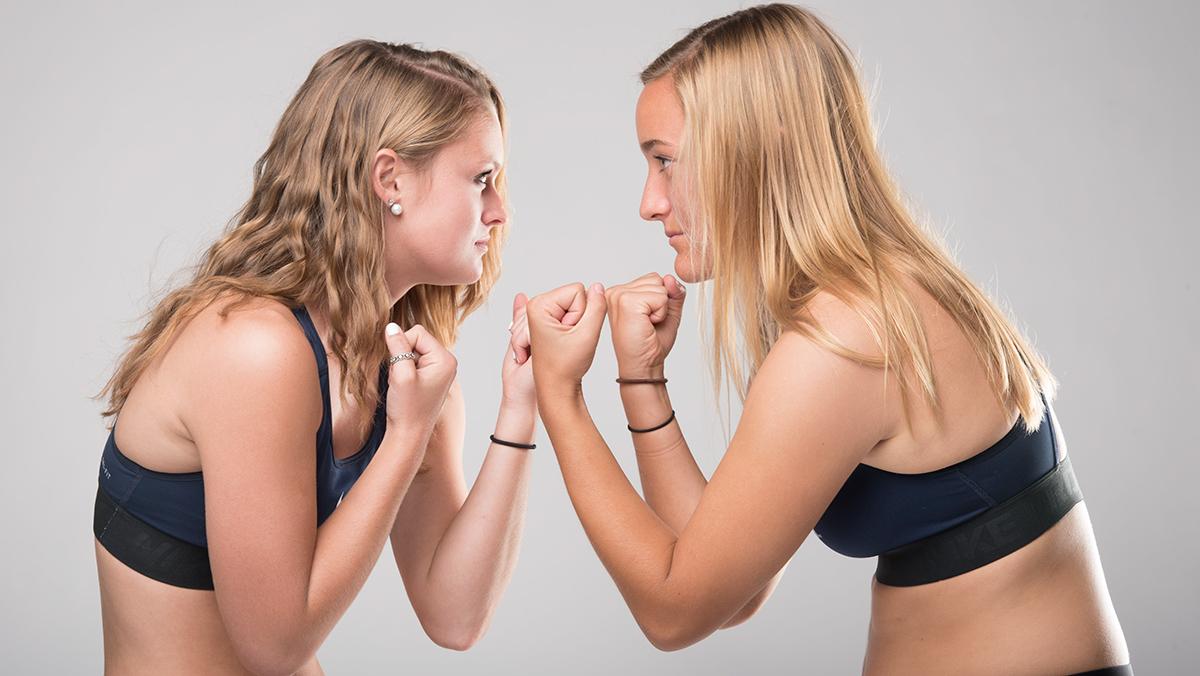 PHOTO COURTESY KELSEY KING
Juniors Caitlin Douglass and Taylor Baranowsky, both of whom are members of the women's soccer team, pose for pictures during a photo shoot for the documentary "Size 0."
By Danielle Allentuck — Assistant Sports Editor
Published: February 16, 2016

King had players explain their personal experiences with this issue, including stories about watching nutrition, things people have told them about their body and how they view themselves.

Assistant Sports Editor Danielle Allentuck spoke with King about her inspiration for making the documentary, what she hopes people learn from watching it and the changes she hopes to see in college athletes.

Danielle Allentuck: Where did you get the idea for the documentary?

Kelsey King: It really came from the fact that I am in a unique situation. I am a TV person and an athlete, so I had access to about 30 girls. I saw this situation in front of me that there’s these 30 girls who work out the same amount, and they all look different. I thought to myself, “This was pretty cool. We are all fit and can do the same things, but we all look different.” So I wanted to use that and show athletes everywhere that you might not look like the girl next to you, but you might have something that she doesn’t.

DA: Why is this issue important to you?

KK: This topic is a close topic to me because I’ve been an athlete my entire life, and as a female athlete, I think sometimes you’re almost expected to look a certain way because if you’re working out, then you should be skinnier, but that’s not necessarily the case. I found that with my body, when I’m at my healthiest, I’m not necessarily my skinniest. I found that my body wasn’t always the way people said a woman’s body should look, but I found that I don’t really care because I like being in shape.

DA: What do you want viewers to take away from watching the video?

KK: I want female athletes, especially, to watch this video and really think about what they’re putting in their bodies foodwise to make them a better person overall. I think athletes in general have to be careful, so I hope this video is a good push to be healthier and more comfortable in their own skin.

DA: Did you run into any challenges getting women to open up and be a part of the video?

KK: No, I would say most of them did want to be a part of it, but not all of them could make it the night I was doing the shoot. The majority of them were extremely willing to take pictures and talk. Everyone I asked to talk did talk. The girls in the video were really the ones that I felt like could convey this message well, and I think they did a good job. No one said no to speaking about it, which is really cool, and no one said no to me having a camera in their face all season. The worst part for them was when I filmed them eating and would shove cameras in their face while they were eating. No one wants that.

DA: What did you learn by making this documentary?

DA: Do you plan on continuing to cover this topic in the future?

KK: I think I’m always going to have a strong connection to athletics and fitness. Fitness is always something that I’m always going to want to cover. As long as I’m in the film industry and can make a difference by making documentaries, I would definitely be interested in continuing to cover this topic. Fitness is always something that is going to be important to me.

DA: Do you think Ithaca College’s athletics office should be doing more revolving around issues of nutrition and body image?

KK: I think Ithaca takes some steps for eating right. As athletes, we go to a lot of these mandatory meetings that talk about healthy eating and things like that. We cover drugs and sexual abuse, but I don’t think Ithaca has ever had one that is specific to self-confidence and body image. I think that that is something that should definitely be thrown in because, along with everything else on that list, this is definitely something that can hurt an athlete’s performance. Knowing that your version of you looking strong may look different than someone else’s version of looking strong is something particular to athletes, and they should include that in somewhere.

DA: Do you have any advice for younger athletes?

KK: I think my biggest advice is that to feel healthy is to be happy. I think that the happiest I am with my body is when I feel healthy. It doesn’t necessarily mean fitting into a size of jeans or whether I can fit into my jeans well. It’s whether I’m putting the right things into my body and I’m feeling that in return.