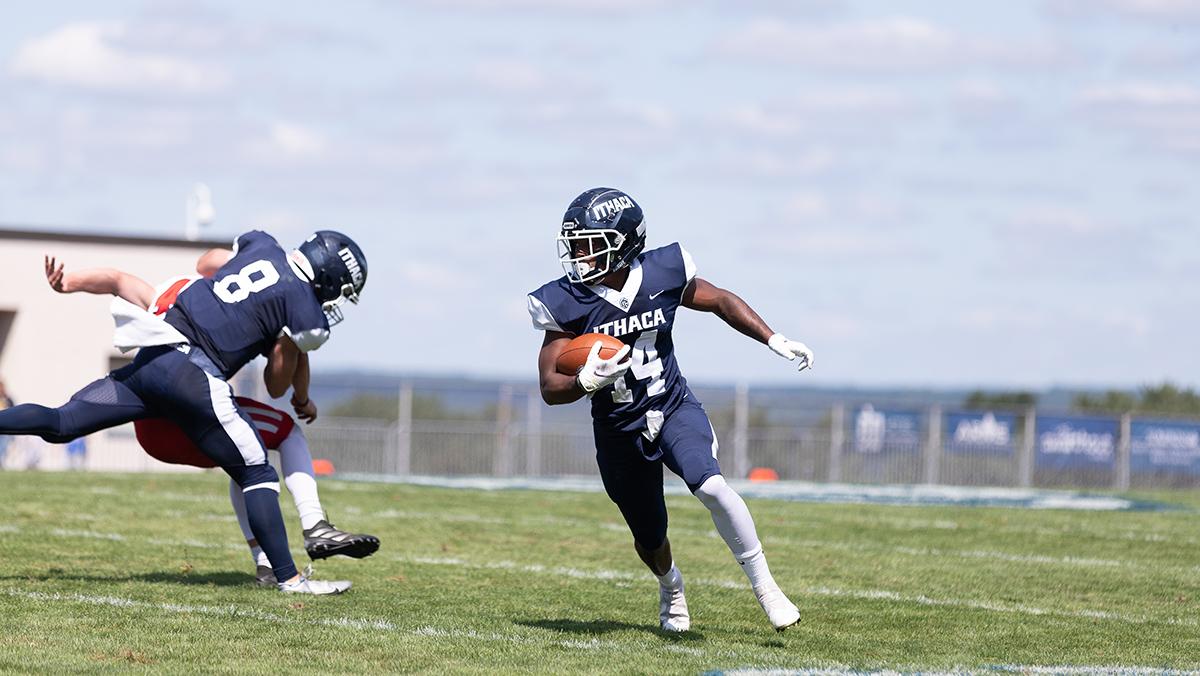 COURTESY OF ITHACA COLLEGE ATHLETICS DEPARTMENT
Sophomore Jalen Leonard-Osbourne is on both the the college's football and track and field teams. He set the program record for the 60-meter dash March 6.
By Ryan Medeiros — Contributing writer
Published: September 30, 2021

As the Ithaca College football team returned to competition in a game against Bridgewater State University on Sept. 4 at Butterfield Stadium, sophomore running back Jalen Leonard-Osbourne walked on the field hoping for the first big play of his collegiate football career after a successful freshman season in another varsity sport.

In addition to playing for the football team, Leonard-Osbourne is also a sprinter on the track and field team. He set the school record for the 60-meter dash with 6.92 seconds at the Nazareth Invitational and also racked up accolades like Liberty League Honor Roll and Liberty League Track Performer of the Week. He was also named to All-Region teams by the United States Track and Field and Cross Country Coaches Association. Leading up to his first season with the football team, Leonard-Osbourne wanted to make a similar impact this fall.

In his debut for the football team, Leonard-Osbourne found a clear lane to rush, turning up the field and using his blazing speed to score a 62-yard rushing touchdown.

The South Hill squad went on to win the contest by a final score of 52–20. For some, the day was made all the sweeter by the commanding victory, but Leonard-Osbourne said the greatest joy for him was having an opportunity to play meaningful football again.

“It felt good getting back on the field,” Leonard-Osbourne said.

Through two games, Leonard-Osbourne tallied 136 rushing yards in just 10 attempts. Football team head coach Dan Swanstrom said that while Leonard-Osbourne has just begun his collegiate football career, he believes that he has the skills to be a key contributor to the Bombers’ offense.

“He’s got a great skill set, and he’s obviously a guy that we’ve worked into the rotation early this year,” Swanstrom said. “But I think the cool part is he’s got a lot to learn, and he can be way better.”

After Leonard-Osbourne lost the spring track season of his senior year of high school due to the COVID-19 pandemic, he said he was looking forward to getting back to competing with the Bombers’ football program. However, the cancellation of fall sports delayed his debut.

“I was so disappointed, as I had been training and working so hard for [the 2020 football season],” Leonard-Osbourne said. “That’s why I ran track, to stay in shape and be able to compete. I love competition.”

Leonard-Osbourne said he was going to run track in college, and he found instant success in both sports. After breaking a program record in the 60-meter dash in his first collegiate event last year, he said it did not surprise him.

“I sort of expected it,” Leonard-Osbourne said. “I am a hard worker, and the times that I ran in high school were faster than [Ithaca’s school record] so I knew I was going to break it.”

Leonard-Osbourne said he has had someone to push him in training his entire life. His older brother, Glenmour, is a sprinter for the University of Louisville men’s track and field team. He said they have been valuable to each other as athletes, helping to better one another for competition.

“[Glenmour] pushes me and I push him,” Leonard-Osbourne said. “We always train and compete together. It’s exciting.”

Before bringing his talents to South Hill, Leonard-Osbourne shined in both football and track at Ardsley High School in Westchester County, about 20 miles north of Manhattan. He led the football program to its first two New York State Public High School Athletic Association Section 1 titles in 2018 and 2019 as a running back and cornerback. On the track, he was named a first-team Westchester/Putnam all-star in both the 100- and 200-meter dashes and posted a silver-medal performance at the 2019 New York State Championships.

The numerous accolades in both sports garnered lots of interest from colleges, but Leonard-Osbourne said he ultimately had his heart set on one program.

“I had the Division I options for track and football,” Leonard-Osbourne said. “But I just fell in love with Ithaca and the campus and coaches.”

Leonard-Osbourne’s competitive drive led him to early success when the college’s athletics resumed in February 2021. After setting the 60-meter dash school record in his first meet, the short-sprint specialist went on to record four consecutive victories in the 100-meter dash from April 12 to May 1, including a season-best mark of 10.78 seconds at the RIT Friday Meet on April 23. Osbourne also contributed to four 4×100-meter relay victories over that span.

Unfortunately, the budding superstar’s season came to a grinding halt as he contracted an illness and was forced to return home for the rest of the semester.​​ Roosevelt Lee, Ithaca College men’s track sprinting coach, said the sickness put a damper on what could have been a historic season for Leonard-Osbourne.

“[Leonard-Osbourne] definitely could have been a national champion last year for outdoor [track],” Lee said. “I am hoping to coordinate things better this year to get him there.”

With Leonard-Osbourne in the midst of his breakout season with the football team, Lee said he hopes that the running back’s time on the gridiron will help his performance on the track.

“The correlation between track and football is the ability to move at any given moment,” Lee said. “The strength aspect translates over to track because you have to be explosive and have power.”

“He came in immediately and was having a pretty big impact,” Tobia said. “He’s earning his touches now, and he’s getting right on the football field. I hope to see him make another big impact there as well.”

A focal point of Leonard-Osbourne’s commitment to the college was the opportunity to play football while continuing to run track. He said he believes that each sport positively translates to his performance in the other.

“Track definitely helps with football because when I first came to camp [this past fall], I was so in shape,” Leonard-Osbourne said. “Football correlates [to track] because I am in shape the whole year-round.”

With two other athletes currently on both the football and track teams, Leonard-Osbourne is looking forward to seeing more competitors expand their athletic horizons.

“I think athletes should do more than one sport,” Leonard-Osbourne said. “Not only for the exposure, but to stay in shape and be able to make connections.”

Tobia said even though Leonard-Osbourne is a talented athlete, it is no easy feat playing two sports during college.

“It’s a lot of work, you have to be a pretty committed athlete to be able to handle the workload of both sports,” Tobia said. “You have to have good time management skills, especially with classes. It’s a lot of fun if you can handle it.”

Moving forward, Leonard-Osbourne will look to continue to prove that athletic excellence can be achieved in multiple sports at the collegiate level.

“I am trying to win the national championship in the 60-meter dash this winter,” he said. “And in football, I would like to win a conference championship and see how far we go as a team.”

Ryan Medeiros can be reached at rmedeiros@ithaca.edu