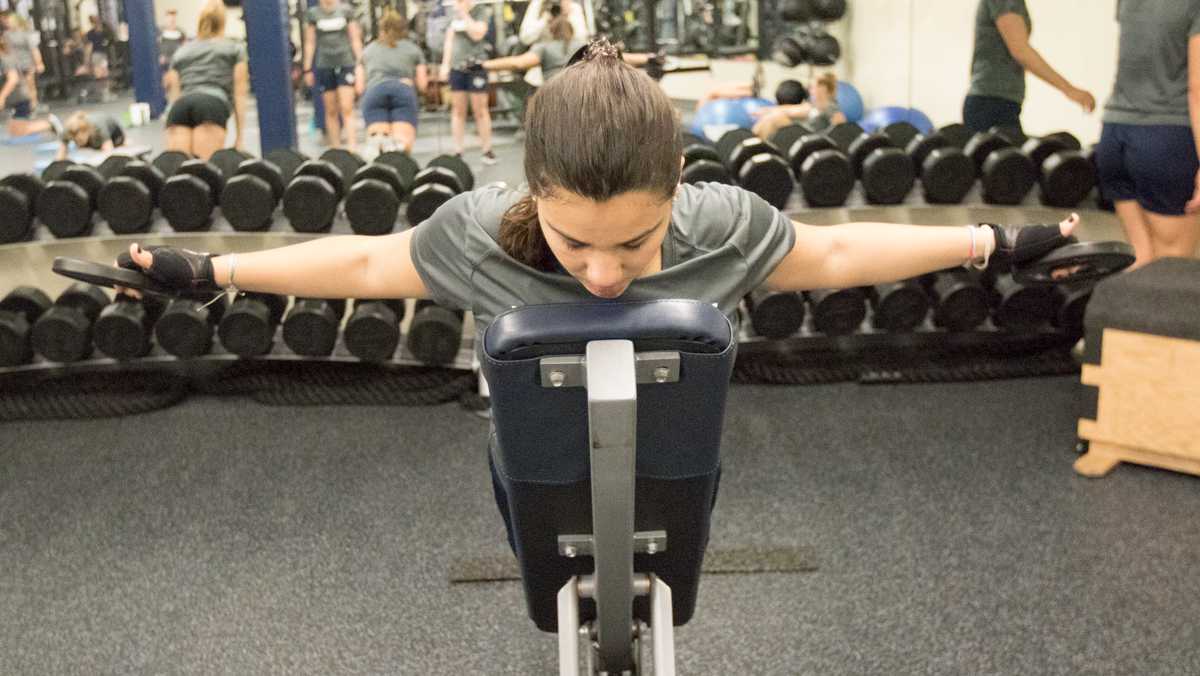 Senior freestyle swimmer Nilza Costa walks into the Athletics and Events Center at approximately 6 a.m. It’s a Monday morning, and while most students are still listening to the voices in their dreams, Costa is listening to the voice of her coach. Her ears ring from the sound of barbells dropping loudly on the floor.

While most students are still sleeping, some have already worked up a sweat. Student–athletes start their days even before the sun has risen, which can lead to exhaustion both mentally and physically.

Will Rothermel, associate athletic director for compliance, facilities and events, said that almost every team has early morning practices before class is in session at some point during the year. Rothermel said most of the teams that have early practices are not in season and that during the season, they usually have conditioning in the morning. It can be lift, conditioning or a full practice, but either way, they are up with the sun, whether or not they got enough sleep the night before.

Early morning practices are held because many teams need to use the fields and the weight room. Even though there are 10 athletic facilities and a weight room in the Hill Center and the Athletics and Events Center, there are 27 varsity sports and 40 club sports. It is easier to schedule practices in the morning than at night because some athletes take night classes.

It is recommended that younger adults, including ages 18 to 25, get 8 to 9 hours of sleep per night, according to Michael Grandner, assistant professor of psychiatry and psychology and director of the Sleep and Health Research Center at the University of Arizona College of Medicine – Tucson.

Most student–athletes get four nights of insufficient sleep per week on average, according to a study done by the American College Health Association.

A study done by the NCAA found that a third of student–athletes get fewer than seven hours of sleep per night. The study also found that due to the times of practices, travel and competition, and balancing athletics with academics, the athletes have a greater chance of developing sleep difficulties.

Poor sleep, he said, can have negative effects both physically and mentally.

“Lack of sleep can lead athletes to be more prone to illness and injury,” he said. “It can also lead them to be physically and mentally slowed down and unable to maintain focus. It can even lead to slower recovery and difficulty managing weight.”

Mornings can sometimes be the worst time to hold practices, Grandner said.

“Early morning practices are particularly difficult, especially for student–athletes whose circadian rhythms are more in line with adolescents than adults,” he said. “This means that early morning is about the worst time to need to be mentally alert, and waking up early can lead to sleep deprivation because of an inability to go to bed early or have enough time for sleep.”

Student–athletes often head straight to class or prepare for a full day of academics. Some teams, including the swimming and diving team, have practice both before and after classes.

The women’s swimming and diving team holds morning practices four days a week. Mondays and Fridays, the team has lift at 6:20 a.m., and Tuesdays and Thursdays, the team has conditioning at 6:30 a.m. Costa said that the student-athletes must be ready to practice at the time practice is scheduled, so they must be there earlier to be ready when the coaches begin.

Hectic practice schedules can affect student–athletes’ academics — the most important part of college.

“My GPA for spring semester has always been better than the fall semester,” Costa said. “I am not a morning person, and I love to sleep.”

In the spring, the swimming and diving season is finishing up, meaning that she has more time to focus on her academics.

Katie Lawson, a senior on the sculling team, said she personally enjoys getting up early to practice before class.

“I actually like morning practices,” Lawson said. “I like being able to have the afternoon to get homework done at my own pace. I find that if I don’t have morning practice, I tend to sleep in and not wake up.”

The crew and sculling teams have practice Tuesdays and Thursdays at 6:30 a.m., Wednesdays at 5:30 a.m. and occasionally on Saturdays and Sundays at 7:30 and 10 a.m., respectively.

Since they practice at Robert B. Tallman Rowing Center on Cayuga Lake, their morning practices take more time out of the day than most teams. They must set aside time to drive down to the boathouse and carpool as well as time to get back to campus in order to make it to their classes on time.

Most other teams hold practice on campus in places including the A&E Center and the practice fields. It is easier for those athletes to get to practice and class if they live on campus.

Lawson said that because crew and sculling practices are very dependent on weather, early morning practice can be a positive thing because the water is calmer and there are no other boats out.

She said that no matter what, the athletes and coaches make sure that those who have class right after practice are in a car heading back to campus by 7:30 a.m. to make it to class on time.

The coaches for the crew team also take initiative when it comes to making sure their athletes are in good academic standing, Lawson said. The team holds study hall every Sunday, and athletes who are in danger of any negative academic situation, such as probation, are required to go. The coaches also monitor who is attending these study halls.

Carroll Rich, senior guard on the men’s basketball team, said he did not like early morning practices his freshman and sophomore year because he wanted to sleep in.

“Looking back at it now, I do like it in the sense that we get all of our work done early in the day and we have the rest of our days to ourselves, which we seldomly do,” Rich said.

Rich said the men’s basketball team only has two to three 6 a.m. practices a year because of the impact they can have on the players.

“Coach doesn’t like going too early in the morning sometimes because he knows it can be counterproductive with how guys feel waking up early,” Rich said.

Even though they don’t have many early practices, during preseason, the team had conditioning on Saturday mornings at 7:45 a.m., along with conditioning in the afternoon throughout the week.

Rich said that compared to freshman and sophomore year, he now likes having practice in the morning because it forces him to have better time management and gives him the rest of the day to get done what he needs to.

While senior fullback Tom Garris said he does not enjoy waking up early, he said that morning practice is sometimes necessary. Because club sport athletes are not able to pick their schedules around their practice times as much as varsity sports, it can be hard scheduling practices that fit into everyone’s schedule. Varsity sports have a set practice schedule throughout the semester, so varsity athletes pick their class schedules around practice times, ensuring they will be at practice.

“If anything, it’s better…. ” Garris said. “We know that nobody has anything else going on at 6 a.m. We know we can get everyone there at our practice, and we can really work on the things that are most important.”

Athletes look to get ahead in course loads to graduate early