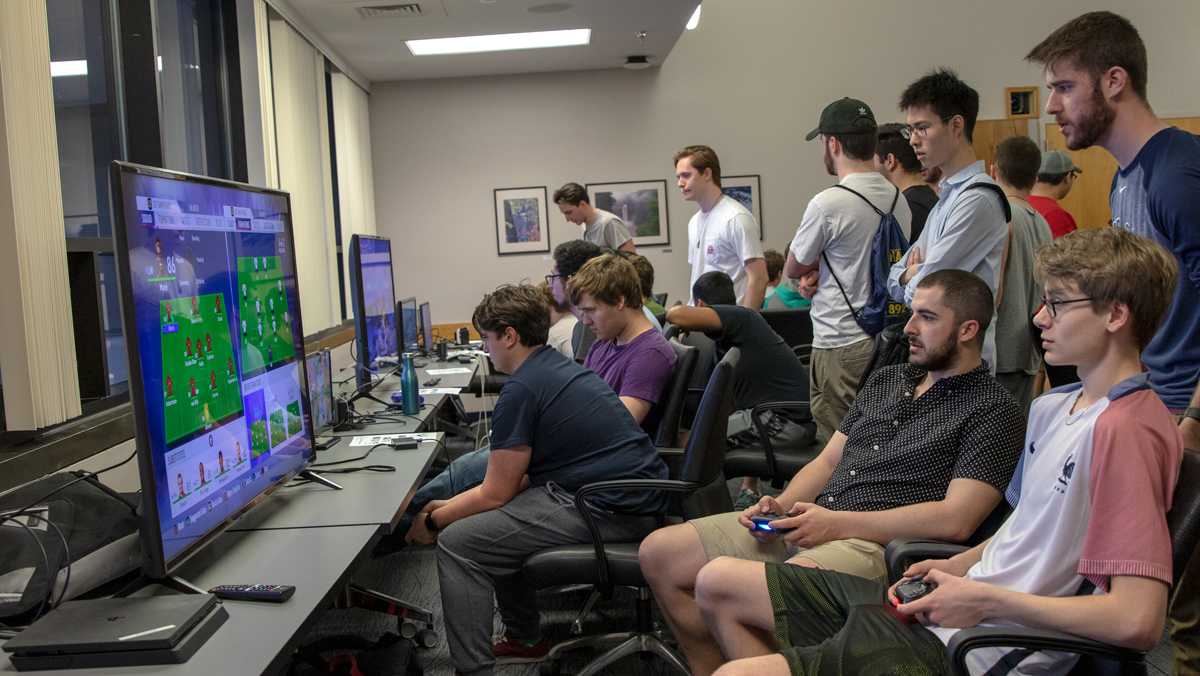 When COVID-19 shutdowns debilitated the United States in March, most sports, both professional and amateur, came to a halt. Months later, many Division II, III and even some Division I sports teams are not playing in intercollegiate competition. When Ithaca College made the decision to continue online instruction for Fall 2020, athletes in fall sports lost the opportunity to compete together on campus. Well, most sports anyway.

Ithaca College Esports Club has remained active since the campus shutdown in March. The club’s president, junior Ross Doane, said that it has grown significantly since the start of the pandemic, growing from 50 to 143 members currently.

“We’re one of the few club sports that can really continue as if nothing happened, which gives a lot of incentive to people to join our club,” Doane said.

Doane said the increase in numbers is because of people wanting to be a part of a community. The club has built a community through Discord, a website that allows gaming groups and other clubs to play together online.

Esports is a form of competitive video gaming in which individuals and groups go head-to-head live. The esports club at the college offers opportunities to compete against other colleges in addition to casual, noncompetitive gaming. Some of the games the club plays include League of Legends, Super Smash Bros. Ultimate and casual party games.

Sophomore Em Reynolds, who is a member of the IC Gold League of Legends team, says they joined the club because it allowed them to meet new people.

Reynolds, who said that casual gamers make up most of the club’s members, likes the laid-back feel and opportunity to have fun with other people from the college.

“It’s just a really chill environment,” Reynolds said. “We do party games on the weekends, games like Jackbox and Among Us. It’s a good way to get to know some people, so a lot of people will do the party games and nothing else.”

Esports have risen in popularity over the past few years as sites like Twitch and YouTube have begun live broadcasting gaming competitions. In May and June, when virtually all sports were on hiatus, ESPN broadcast several live esports events. The esports industry has added 100 million viewers to its audience since 2018, growing to 495 million, according to Newzoo, a game market insight analysis group. The audience is expected to grow to 646 million in 2023 globally, according to Newzoo.

At the collegiate level, esports are rising to the varsity level at many institutions. The National Association of Collegiate Esports (NACE), which was created in 2016, is the sole organization for college-level varsity esports and has over 170 member schools and 5,000 athletes. Ithaca College is not a member of the NACE.

The only competitions the club has been involved with since March have been friendly, low-stakes tournaments with members of the club and other schools. The club hosted its first Super Smash Bros. tournament of the semester in September. The competition drew 17 total players from the college, Cornell University, Syracuse University and University of New Hampshire (UNH), with the winner coming from UNH.

“The fact that you can still get the same experience online or in person for the most part definitely helps it during a time where it’s safer to be online,” Doane said.

Some aspects of the club are about to get more serious. One of the club’s two League of Legends teams recently got approved to join the Eastern College Athletic Conference (ECAC). That means IC Blue will be involved in League of Legends competitions against colleges across the region — like SUNY Canton, Marist College and University of Louisiana at Lafayette — and eventually the country. Hideo Schwartz said he is excited about the opportunities it brings for the club.

“We’ve faced other college teams before but never in a tournament until the ECAC,” Schwartz said.

Schwartz said there are plans to create a third League of Legends team if enough people are interested in playing competitively. He said the club holds tryouts every year in order to keep the club’s competitive teams the best they can be.

Junior Manny Sanchez, who is the IC Blue team captain, has been involved in esports since 2013 when he started his own esports club at his high school. He said his role as captain mostly focuses on administrative aspects of the club that keep things running smoothly.

“I basically help set up practices, schedule games with teams we’re playing in certain weeks,” Sanchez said. “I’m also the point of contact for the team for both other captains and the league itself as well. It’s my job to basically just make sure that we’re doing everything we need to do.”

Sanchez said some of his other roles include operating drafts before every game. This draft is called Champions Select and is when players find out who their competitors are. Games include two teams of five players. Sanchez said it is important to draft a good team composition, or a collaboration of players who have good chemistry when competing together.

Sanchez said that the IC Blue team was organized in March after the college’s campus closed, so no one on the team has met in person yet. He said that the club had wanted to start a competitive League of Legends team for a while, but no one had time to organize it until there was nothing else to do in quarantine.

The club members also have a new resource to help them prepare for competition. The Esports Room was recently finished in Friends Hall. Although Reynolds isn’t on one of the League of Legends teams, they said they are excited to use it once students are allowed back on campus.

Despite receiving more attention during the pandemic, Schwartz said that he thinks remote gaming is not the future of esports. He said there are flaws in remote competition that in-person competition does not have to worry about.

“When you’re doing it from home, everyone’s internet connection is different,” Schwartz said. “One person might have great connection, but another person might not have as great internet and could disconnect in the middle of a game. When you do it on the same stage with the same internet, there are no internet problems.”

Esports Club has the perfect blend of friendly competition and serious gaming, a dynamic that has helped the group make it through the past few months.

“Once we went online, we realized our [Discord] server is a really good place for anybody, even if they’re not into esports or are only into fun games or even if they’re not into games at all,” Doane said. “They can just be there and chill with other students outside of class. It’s kind of a way for people to interact with each other despite being online.”