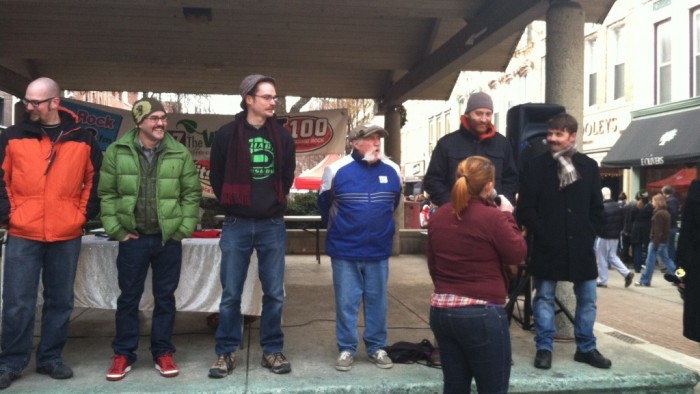 Facial hair of all shapes and sizes took center stage on The Commons at this year’s annual Chili Fest mustache competition. Contestants sported twirly handlebars, full beards and stick-on, glitter staches, hoping to be the crowd favorite and win the title of best mustache.

This event was the fourth annual installment of the mustache competition, hosted by the Downtown Ithaca Alliance. It was an event all festival attendees could enjoy and compete in, regardless of facial hair.

Over the past few decades, beard and mustache competitions have entered into the world of sport. The World Beard and Mustache Championships are held biannually. Patty Clark, events coordinator for the Downtown Ithaca Alliance, said this year’s event was particularly important because of the sport’s growing popularity.

Just like world competitions, the hopefuls in the Chili Fest mustache competition are judged in different categories. While world competition has up to 10 categories, like the Dali mustache, The Imperial and the Hungarian mustache, Chili Fest staches were judged in three categories: the hairiest, the cutest and the curliest. The winners of each category then moved on to the final round to compete for the grand prize: a small trophy with a mustache glued on the top, a $25 gift certificate to the restaurants and shops on The Commons and mustache glory.

“Everyone wants people to look at them and say, ‘That’s the best mustache in Ithaca,’” Clark said. “It’s an awesome honor.”

The host of the event, Kat Walters, introduced the crowd to the contestants and had the audience cheer for their favorite. Walters announced one of the categories and crowdsourced who would move onto the finals in each division based on applause.

Ithaca resident Jonathan Ward, who went by his mustache alter ego “El Guapo” in the competition, was first in line. When his name was called, the crowd roared, and “El Guapo” was moved on to the final round.

Ward said though he didn’t know there was a mustache competition at Chili Fest, he had a great time participating in the event and enjoyed the event’s showmanship. As he stood up on stage, “El Guapo” frequently pulled a comb out of his pocket and ran it through his thick, brown, nine-month-old handlebar mustache.

“It was fun playing with my mustache in front of so many people,” he said.

Though his mustache might not be as old as Brown’s, he said he puts a good deal of effort into taking care of his facial hair.

“I comb it, I twirl it, I condition it,” Ward said. “I give it a lot of trimmings, tender care and love of course.”

Walters made her way past Ward and another contestant sporting a full, brown beard before arriving at John “Johnnycakes” Brown, last year’s winner of the Chili Fest mustache competition. Starting bushy on his upper lip, Brown’s mustache has a classic Fu Manchu quality to it, but instead of hanging straight down, his thick, white hair juts out to the sides. It resembles an overgrown handlebar mustache, wide at the bottom on both sides.

Walters was initially unimpressed by the crowd’s response and eliminated Brown from the competition.

Brown was ready to leave and headed off the stage when the crowd began to stir.

The crowd grew louder and louder, demanding that Brown move on to the final round.

Walters said she couldn’t ignore the crowd’s request and allowed him entry into the finals. She continued through the line of contestants that ended with two small girls with bedazzled, adhesive mustaches.

Brown said he has been working on his mustache for more than five decades.

“I’ll tell you, I was 17 when I got kicked out of high school for attempting to grow a misplaced eyebrow, so I’ve been growing [a mustache] since 1960,” Brown said.

Walters said the mustache competition was successful, and she thought the festival goers responded positively to the event.

“This is a good time where everybody in the community is together,” Walters said. “We have all different kinds of people [who participate], young and old — everybody can sport a mustache. And that’s the great thing about the competition.”