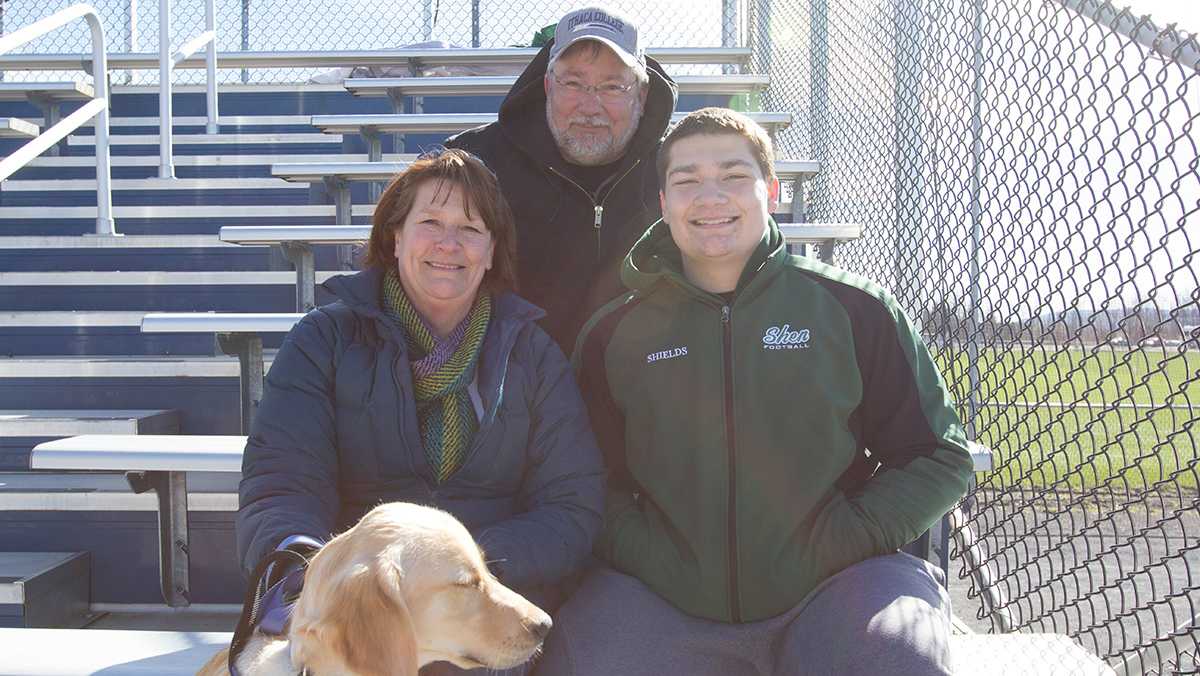 Lori Shields piles in the car with her husband, Gary, their son, Michael, and their puppy, Russell, to drive from Clifton Park, New York, to Ithaca to watch their daughter, freshman Abby Shields, play softball. During the game, they talk to each other and the other spectators in the stands as they watch the end of the Bombers’ 5–2 victory over Nazareth College on April 8, in the first game of the doubleheader.

The biggest champion of the game was Russell, who squirmed excitedly in Shield’s arms. No spectator could pass Russell without bending down to pet him.

Families are a big part of the culture of college sporting events. They make up a large majority of the cheering section at games, meets, matches and regattas.

Since her daughter is only a freshman and the season only began in mid-March, Lori said, she is starting to get to know the other families. The families have been very welcoming to the freshman’s parents, Lori said, by sending them emails to let them know what is going on and to keep them in the loop.

“When the girls travel, we usually have a little tailgate before the game, and we usually do something between their games and then something after,” Lori said.

At the women’s basketball games, a majority of the families sit together in the stands. Some of the moms can be seen interacting with the players before the game begins.

The families get together frequently and have plans to do so over the summer. The parents are the ones who arrange the senior day meal, and they organize the end of the year banquet.

Head coach Dan Raymond said that when he had one-on-one meetings with his players at the end of the season, many talked about how the families got along and were so close to each other.

“One of the students actually said, ‘Our parents are closer than we are as teammates,’” Raymond said. “It’s really interesting how those relationships develop — you don’t even think about that.”

When the team was at Stevens Institute of Technology for the Empire 8 tournament Feb. 24 and 25, one of the parents who lives in the Hoboken, New Jersey, area arranged for the team to have a meal at a restaurant.

Raymond said the whole team has been to the houses of different families.

“We’ve been to Erin Ferguson’s twice,” he said. “We went down to Sara Jackson’s house this season when we went to Connecticut College to play. Whenever we’re in the area where the parents are, they want to host us.”

Jackson said that since most of the parents try to attend all of the games, they have grown a bond in and out of the gym.

“It’s great to be a part of a program that has far surpassed just being a team — I would truly say that we are all one big family,” she said.

Stephen Wagener, the father of sophomore Danika Wagener, an attacker on the women’s lacrosse team, goes to as many games as he can, despite living four hours away from the college.

“We try to get to the weekend home games,” Stephen said. “We go to away games only if they are closer to Connecticut than Ithaca is.”

When Stephen can’t make a game in person, he said he does his best to livestream it. He has been to Elmira, New York, and Oneonta, New York, for games.

Stephen said that the four-hour drive is worth making.

“I can’t complain because we only have a short amount of time left of watching her play sports after all these sports for all these years,” he said. “We got to enjoy it while we can.”

Just like the softball and basketball teams’ parents, Stephen said, there seems to be a community among lacrosse parents.

“There are people who organize the after-game meal for the players,” he said. “We are all on the same email list.”

“If there’s few students there, they always cheer us on and bring positive energy during and after the games,” Mazzella said.

Raymond said that whenever there is a game, especially when it’s at home, the parents interact not only with each other and their own children but also with roommates and other members of the team.

“The relationships that our students have not only with students but also with their parents is one of those things that you forget about how important that is,” Raymond said.