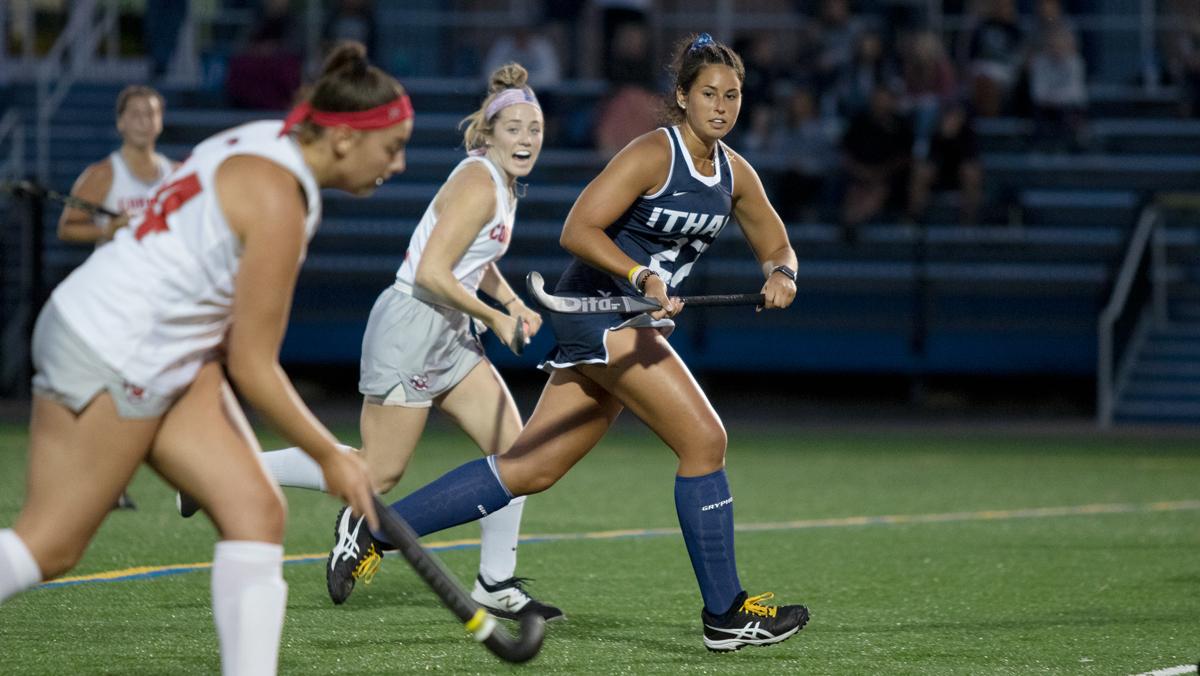 Sophomore Victoria Sestito has been surrounded by hockey her entire life. The defender, who has been a standout for the Ithaca College field hockey team this year, has two older brothers, Tom and Tim, who both competed for several seasons in the National Hockey League.

Sestito has started in all eight games so far, racking up a total of 480 minutes of playing time. She has also tallied 16 shots and two assists.

Staff writer Audrey Gamble spoke with Sestito about her field hockey career and the experience of having professional athletes in the family.

Audrey Gamble: How did you get into field hockey?

Victoria Sestito: In my hometown, we had a summer league at our local park, and one of our family friends played. She let me use her old sticks, and I got started that way. I was in fifth grade.

AG: How would you describe your style of play?

VS: I would say that my style of play is aggressive but controlled. We talk a lot about the defense demanding the ball and being able to step up, so I think that, personally, I can lead by example.

AG: What are the similarities between ice hockey and field hockey?

VS: It’s a big communication game for both sports. It’s all about working for your teammates and giving 100% of your effort to reach the team’s goals.

AG: How old were you when your brothers left home?

VS: I was eight when they were drafted, but they left home in high school when I was five or six and lived with billet families [who host young elite players] to play [USA Hockey] juniors. I didn’t really grow up with them like you would with “normal” siblings. They left to get the exposure they need for their careers, but I’m still super close with them now.

AG: What was it like to grow up with siblings who were professional athletes?

VS: They’re normal people, and we’re just a normal family, but it changed my entire perspective on being a better athlete and better person overall. They had to make sacrifices throughout their careers like leaving their families to travel for games. Their work ethic and the fact that they’ve always strived to be better definitely translated to me, and, because of that, I’ve always pushed myself to be better at field hockey.

AG: What are some of the challenges your family has had with your brothers playing hockey at such a high level?

VS: Hearing the negative things that other people would say about them was always hard. You never want to hear someone say bad things about your brothers. For them, no matter what people said, they would just let it go and use that as motivation to work harder and prove those people wrong.

AG: Was it ever strange to watch your brothers play?

VS: It was always weird to see them fight. It was scary at times, and there would be this moment of ‘That’s my brother, is he okay?’ I was probably 12, and Tom got knocked out in a fight, and the paramedics had to come on the ice. I look back on those videos and you kind of realize that, yeah, they are pro athletes, but they’re not invincible.

AG: How have your brothers motivated you?

VS: My brothers’ confidence in themselves is something that has helped me a lot as an athlete. Tim is a natural leader and people really respect him, so I hope I can be like that and get respect from my teammates. As cliche as this sounds, their love for the game really inspired me. They are supposed to be these tough athletes and they are, but they are also regular people. They are expected to do all these great things, but they make mistakes like the rest of us. It’s how you learn from those mistakes that makes you better.