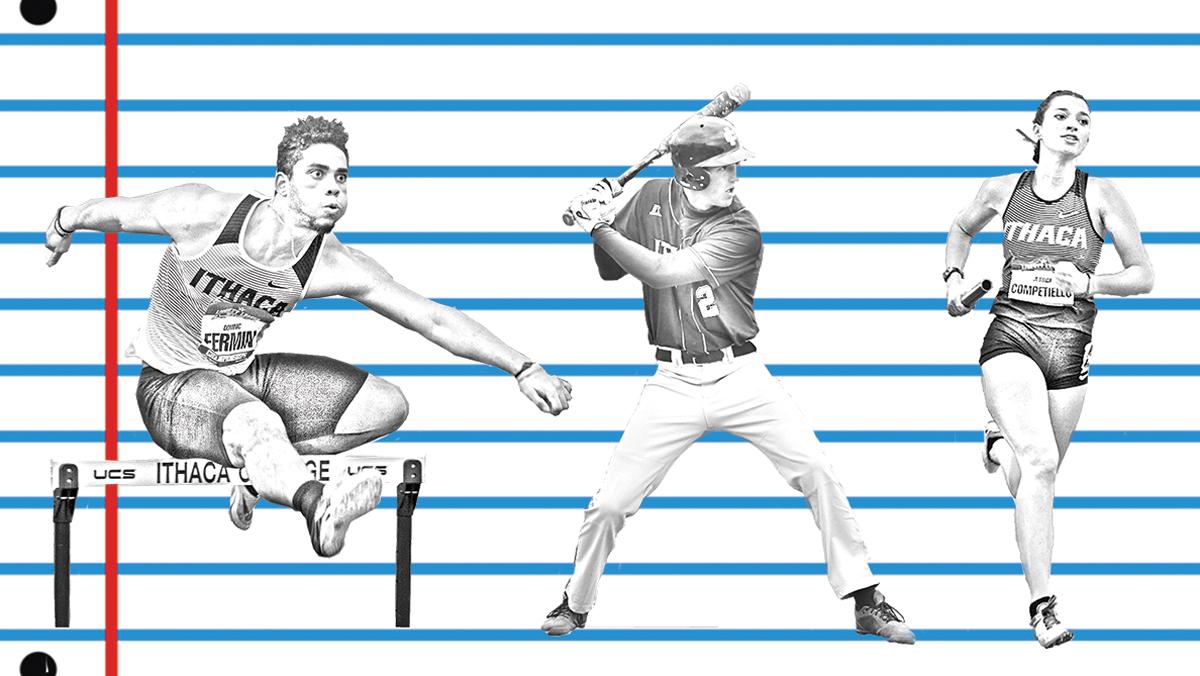 Julia Cherruault and Abbey London/THE ITHACAN, design by Anna Costa and Erika Liberati
The Ithaca College baseball team has Empire 8 tournament games during finals week, and the track and field teams compete at last-chance qualifier meets out of state.
By Jack Murray — Sports Editor
Published: May 2, 2019

When sophomore pitcher Bill Willett leaves the classroom after his last final exam May 8, his focus will immediately shift from getting the best grades possible to help his team reach the 2019 NCAA Division III Baseball Tournament.

Ithaca College will hold this year’s final exams from May 7 to 10. During this time, students do not attend class at their regularly scheduled times and instead have specific time slots for taking tests and writing essays. This does not correlate with their regularly scheduled class times. For example, in the Spring 2019 finals schedule, classes that meet on Monday, Wednesday and Friday at 10 a.m. instead meet on Thursday, May 9 from 1:30 to 4 p.m. for final exams.

While this time period is a change of pace for regular students, the spring season student–athletes at the college are either wrapping up their seasons or preparing for postseason competition. The baseball team is hosting the Empire 8 Championship tournament from May 9 to 11, while the men’s and women’s track and field teams are slated to perform at a last-chance meet May 9 at SUNY Geneseo. While this meet is not a requirement for the athletes, it offers an additional chance to qualify for the NCAA 2019 Division III Outdoor Track and Field Championships from May 23 to 25.

Willett said that though having the makeup games and conference tournament happening right before final exam week will be difficult, he was lucky enough to have his finals scheduled earlier in the week. He said that once his finals are done, it will not be much of a change from his current daily schedule.

“It is going to require me being proactive to get my work done and studying in,” Willett said. “It is near the end of the week, so it shouldn’t be too different.”

Senior heptathlete Catherine Larkin is entering her last final exam week as a student–athlete at the college. She said that in the past, she has not had too much difficulty rearranging her class schedule if necessary.

“In my experience, professors have always been accommodating to any conflicts I have had with finals during postseason,” Larkin said. “As long as you communicate with your professors respectfully and in advance, they are usually very willing to help.”

Larkin said that in her time at the college, the athletics administration has been accommodating with allowing her to be able to have adequate time to prepare for her exams as well as perform at her peak level.

“As a Division III program, my coaches have always stressed that we are students first and athletes second, but Ithaca College does a nice job of allowing us to be both,” Larkin said. “In the past, athletes have been able to rearrange their finals schedule, Skype into lectures and have coaches proctor exams while away at meets or games.”

Even though the college does an adequate job in allowing its athletes to meet their academic and athletic needs, Larkin said she loses study time during the Liberty League Championships because of the intense and demanding environment at the meet.

“Competing the weekend before finals will definitely impact studying time, especially because Liberty Leagues is such a high–energy meet,” Larkin said. “Between competing in my own events and cheering on my teammates, I find little to no time to study. That is why I find it really important to plan ahead and account for the time spent at the meet. This lets me be in the moment without constantly stressing about all the things I have to do.”

“It’s hard because I have a lot of work and studying that I need to make sure I do, but I also need to make sure I get enough sleep every night so I will be rested for the games,” she said. “I’ve had to learn really good time management so I have enough time to finish assignments but also take care of my body.”

Simoncini said she has struggled over the years to separately concentrate on her academics or athletics during finals week but has strengthened her ability to focus on the present since her freshman season.

“When you’re at practice, you’re worried about everything you have to do after, and then when you are doing work, you’re worried about practice later,” Simoncini said. “I think it’s all about just being in the moment. I always have to block out hours a day for practice, so, by this point, I just know the time I have to do work and schedule everything else around it.”

Willett said that he has adjusted to balancing his baseball schedule and academics throughout all of the weekend games the team has played. He said he is going to take the same approach to studying that he has all season during his makeup games on May 4 and 5.

“I’ve gotten used to studying in the season with weekend trips, so it isn’t very different from most weekends,” Willett said.

Larkin said that creating a study strategy and committing to a schedule helps her manage time and get as much study time as possible. She also said her teammates have always proven to be a resource to work with.

“I find it helpful to plan out my studying down to the hour, taking advantage of any free time we have, whether it be on the bus ride to a meet or in the hotel lobby the night before we compete,” Larkin said. “It is also really helpful having teammates who are studying for the same final or have taken the course you are studying for in the past. I am really thankful for my teammates because they are a great resource and support system.”

Willett said that having the Empire 8 Championship tournament during finals week is beneficial because it gives the team a chance to end their league season while people are still on campus, and the team has a chance to qualify for the NCAA Championships.

“I’m very excited,” Willett said. “We have worked really hard to host it and are looking forward to extending our season.”

Finals week: How stress works in the body