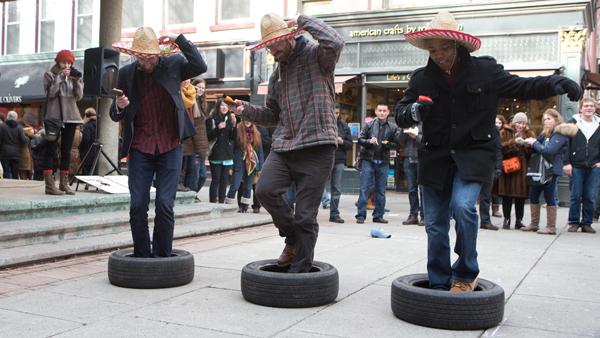 While hungry festivalgoers waited in line for cups of chili at the Great Downtown Ithaca Chili Cook-Off, some took a shot at the Chili Olympics — braving an obstacle course made of tires, spoons, sombreros and paddles in the middle of The Commons.

Contestants participated in a number of games in the first-ever Chili Olympics on the brisk Saturday morning, and some walked away with a $25 gift card and a Chili Olympics championship title to their name.

During past Chili Fests, the area of The Commons was home to obstacles that promoted the prevention of drunk driving. This year, organizers said they wanted to mix it up.

“This was kind of their [the Cayuga Radio Group’s] thought on how we could make this part a little more fun,” Patty Clark, event manager for Downtown Ithaca, said. “This is a way for you to interact and do something really silly that’s a little competitive.”

The event consisted of four game challenges: an obstacle course, a game of tomato pong, a hot tire challenge and a jalapeño hustle.

Cornell University student Michelle Nanni said she and three fellow students were asked to volunteer in the opening challenge.

The students said they enjoyed racing in the obstacle course.  For the race, the contestants had to circle around two sombreros and step over a tire, all while trying to balance a jalapeño pepper on a small, plastic spoon.

“It was awkward at the beginning, but then it got really fun,” Cornell student Taylor Smith said.

After the first round, festival attendees joined in the games. Four participants stepped up to the plate to play “tomato pong,” in which each contestant had three cherry tomatoes and three chances to make it into a tire hole.  One gift card winner for tomato pong was Peter Park, who said he participated in the event “just for fun.”

Though the beginning of the Chili Olympics started off slow, people were lined up to participate in the third and fourth games of the event: the hot tire challenge and the jalapeño hustle.

Casey Martin, participant and winner, said he had a great time hustling and an even better time winning the $25 gift card. Martin and his fellow contestants had to wear the sombreros on their heads and balance a jalapeño pepper on it while balancing another on a tiny ping-pong paddle. They then had to race each other by stepping through tires one way and straddling them back. The competitors were having trouble holding onto both their peppers, but Martin said he was prepared and finished ahead of the rest.

Martin said he participated in the Chili Olympics because he is athletic and loves chili peppers.

“I’m really overjoyed, I’m still kind of processing it,” Martin said.  “Tomorrow morning it will really set in. I might go to Disney World.”

While a $25 gift card won’t go far in getting someone to Disneyland, Martin said his winnings would go a long way toward getting him a ticket to an upcoming show at the State Theatre of Ithaca.

Four games, eight sets, eight $25 gift cards and a bunch of happy people later, it was a successful Chili Olympics. Next year, Clark said she is hoping a lot more people will be aware of the events.