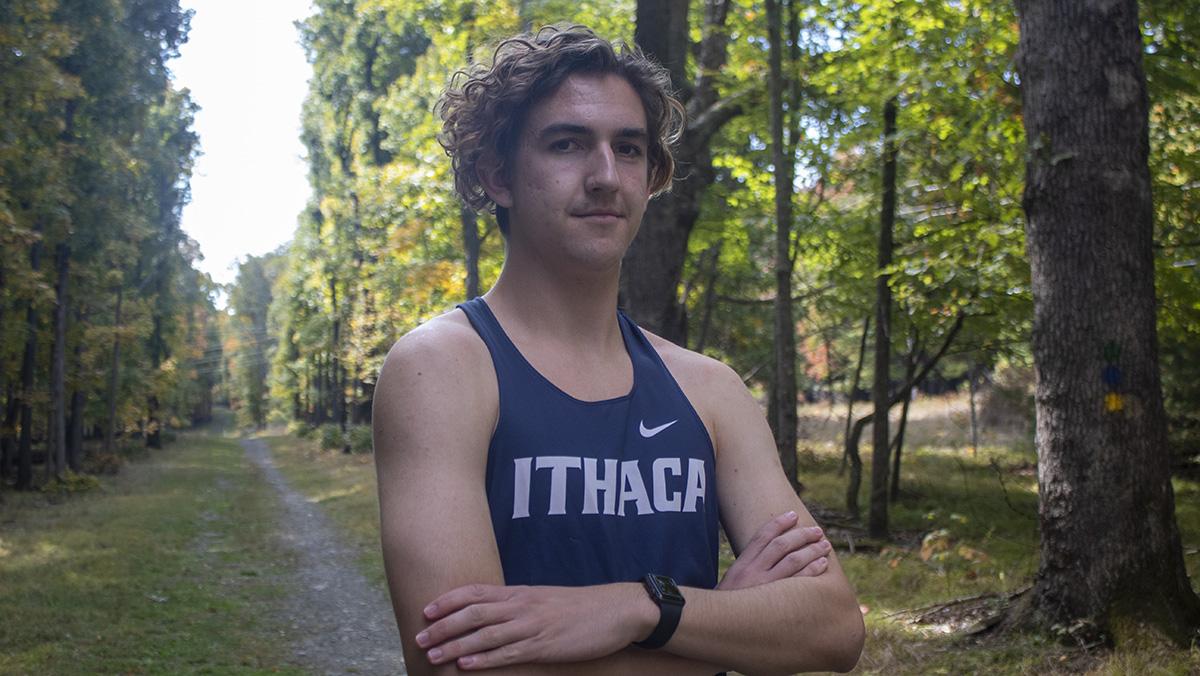 Kai Lincke/The Ithacan
First-year student Carter Rothwell, recruited to play track and field at Ithaca College competed in his first race as a member of the men’s cross-country team placing 52nd out of 76 runers in the field.
By Aidan Charde — Sports Editor
Published: October 18, 2022

At the Hamilton Invitational on Oct. 8, the Ithaca College men’s cross-country team saw a solid performance from first-year student Carter Rothwell, who crossed the line in 52nd out of 76 runners, with a time of 30:54.7.

However, what is not written on the stat sheet is the roundabout way in which Rothwell came to be a part of the cross-country team.

As opposed to most of the athletes on his team, Rothwell is not a distance runner and the Hamilton Invitational was the first time he had ever done a distance event at a competition. Rothwell was a soccer player and middle distance runner on his high school track team, which means that running for more than a few minutes is something he said he is not used to.

“[In the past], I’ve kind of maxed out around three to 4,000 meters a day,” Rothwell said. “Not anywhere close to what you do in cross-country, where you can average, like, 10 miles a day.”

While he was a soccer player, Rothwell said he finds it amusing that his experience in soccer did not get him the endurance levels typically associated with the athletes. Instead, his family was what got him into running.

“I was a goalkeeper, so I kind of just shuffled side-to-side,” Rothwell said. “But my father did track in high school, he went on to college, so looking at his example, that kind of motivated me to pursue track. … I mean, it’s kind of always been family.”

That plan was derailed, though, when he strained a hamstring in the first week of cross-country practices, causing him to miss the first three competitions in September. Nichols said it was a challenging start to Rothwell’s collegiate career because not only did he have to recover from the injury, but he had to do it for a sport he had no experience in.

“He doesn’t know what to expect and he doesn’t know what to be doing,” Nichols said. “You want athletes to do certain things, but if they’ve never done it before, they don’t have any feedback … it makes it a little bit more challenging. But Carter has done a great job, he’s done everything we’ve asked him to do.”

When he finally was able to compete, Rothwell said it was a positive experience, no matter how different or difficult it was.

“It was a change of pace,” Rothwell said. “Entering a new environment, I guess, presents opportunities to, you know, become a stronger runner and find success. … I’m pretty happy with my performance. Obviously, you take it as a learning curve.”

Sophomore Christopher Licata, who is also a middle distance runner on the cross-country team, praised Rothwell’s hard work to build up his endurance before the season began. He also mentioned that both he and Rothwell, along with other middle distance track runners, need to pay careful attention to their training so their muscles are ready for the shorter distances in the winter.

“Since this is his first cross-country season, he never really knew how to build up mileage,” Licata said. “He talked to a bunch of [the older runners] and asked how he could build up mileage for the season. And, from what I know, he stuck to the plan they gave him and built up his mileage. He was running 60-mile weeks, which I don’t think he ever did at all in high school.”

And even through the injury, Licata said Rothwell has still been putting in all the work in order to heal and improve his ability.

“He’s always at practice, like, 30 minutes early,” Licata said. “He’s been working his butt off in a lot of the practices, so he’s definitely trying to make up for the lost time.”

Nichols said he commends Rothwell for being willing to step out of his comfort zone and try a new event. He said that he knows it can be hard to jump into something with entirely different mechanics, but that Rothwell has done it with enthusiasm so far.

“It takes great courage to do what he’s doing out there,” Nichols said. “He was, you know, in between the pipes [as a goalkeeper] for four years and … running the 800, which is basically four laps around the track … versus now, he’s preparing to run a five mile race, which is 10 times that distance for him.”

Regardless of his times, Rothwell said he is just enjoying the season and making sure he gets ready for the indoor track season, which begins in December. Although he said he wants to do well in cross-country, his goal is just to be the best runner he can be.

“It’s kind of like our motto, but ‘run for fun and personal bests’ [is my goal],” Rothwell said. “I look at each practice, each meet, as an opportunity to improve as a runner to get better. And that’s what I’m here to do.”