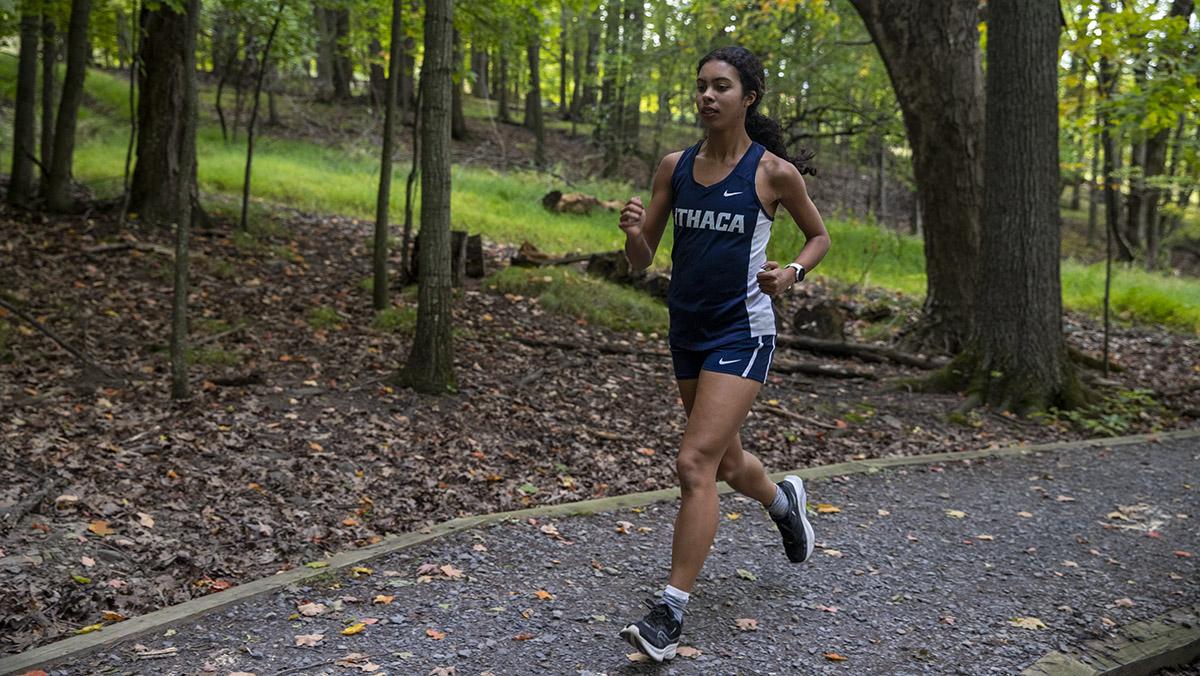 Since joining the Ithaca College cross-country team, first-year student Jessica Goode has been making statements in the Liberty League.

Goode has paced the team in three straight weeks to open the season and won Liberty League Rookie of the Week on Sept. 12 and Performer of the Week on Sept. 19. She placed ninth overall at the Hamilton Short Course on Sept. 10 in her first collegiate meet, before following it up with an eighth-place finish a week later at the University of Rochester Yellowjacket Invitational on Sept. 17—sixth among college runners.

In her third meet, the Paul Short Run at Lehigh University in Bethlehem, Pennsylvania, Goode placed 74th out of 1,131 runners and set a personal best time of 22:30.9.

Contributing writer Andrew Roberts spoke with Goode about her reaction to her performances and recent recognition.

Andrew Roberts: What inspired you to run cross country here at Ithaca College and in general?

Jessica Goode: [The college has] a really strong track and cross-country team, I really like the coaches and they know what they’re doing. I come from a family of runners and athletes, especially on my mom’s side, so sports is a very important outlet to us. My parents put me in sports, and I kept with it.

AR: How was the first couple [of] weeks running with the team compared to your expectations?

JG: I really love it. Everyone is so kind and positive. It has met my expectations; the workouts are tough but in a good way. I just like how everyone cares about each other and lifts each other up.

AR: How have you felt about your own performance?

JG: I didn’t know I would be at this level as a freshman right now. I did look at other people’s times before coming to college, but I guess I never really thought about it. I can’t believe I’m at this point with the help of my high school team and coach, and also right now with my coach and teammates.

AR: What was your initial reaction when you won Rookie of the Week?

JG: I was very surprised. Personally, I did not know these awards existed, so when I saw this, I thought it was so cool. I was very proud of myself, and it just inspires me to keep working harder, stay in a good mindset, and keep doing what I’m doing.

AR: After winning the first award, what was your reaction when you won the second?

JG: After the second one, now I’m really believing in myself. I’m more confident now that I have these things; they surprised me.

AR: How has the confidence boost from these awards helped you to continue to improve?

JG: I don’t think about it all the time, I just run. But I walk on the line knowing where I’ve come from, how far I’ve come, and I tell myself ‘I’ve got this.’ I came from a very competitive high school team where I wasn’t the No. 1, and I wasn’t as confident back then.

AR: How does it feel to be a leader on this team so early in your college career?

JG: It’s, once again, a very big confidence boost. I wasn’t expecting to be the No. 1 girl and be consistent about it, since certain days, people might feel better than others. I’m glad I’m able to contribute to the team this early on in my collegiate athletic career.

AR: What inspiration have you taken from the upperclassmen on the team?

JG: We work together, work as a pack, feed off each other’s energies and empower each other.

AR: What individual and team goals do you have looking ahead?

JG: This one is very ambitious, but there’s this race at Rowan College called the [Inter-Regional Border Battle] and the individual winner gets a sword. It might not happen this year, but that’s a big thing I want because I’ve always wanted a real sword. Short term, I’m hoping to race smarter and get a faster time. I want to break 23 minutes in the 6K.

Note: Goode broke 23 minutes in her most recent race, the Women’s College Brown 6K at the Paul Short Run, hosted by Lehigh University on Sept. 30, which took place after this interview.