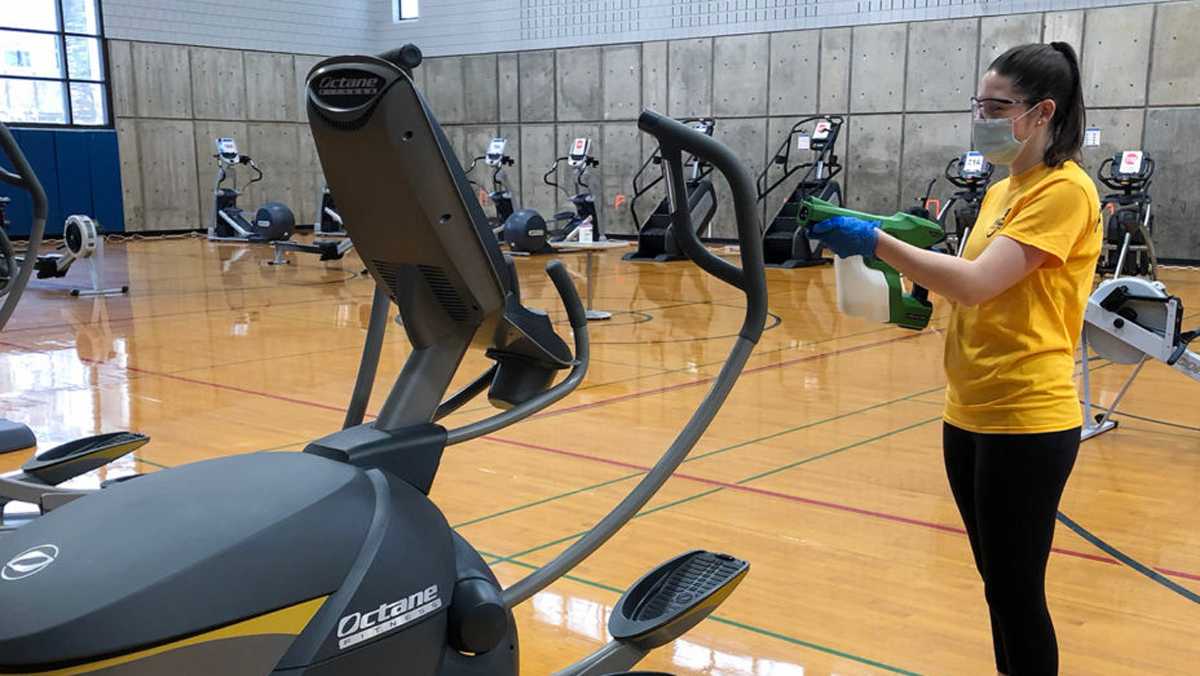 At the Ithaca College Fitness Center, students will not hear the usual dribbling of basketballs nor squeaking of shoes in the lower level of the gym. Instead, the space is filled with rowing machines, bikes and other cardio equipment as the Fitness Center reopens for the spring semester, with new COVID-19 precautions.

The facility — located between the Upper Quads and Lower Quads residential halls — reopened its doors to students on Jan. 25. Sean Reilley, associate director of the Office of Recreational Sports, said that the facility is currently designed to minimize contact with others, but still allows enough space and equipment for a solid workout. In addition to the cardio equipment spaced out in the Mondo and hardwood floor gyms, the upstairs equipment, including treadmills and squat racks, is also spaced out into socially distanced exercise pods. Masks must be worn while working out.

Cardio equipment is spaced out by 15 feet and staff utilize an electrostatic sprayer, which retails between $600 and $1,200, to clean the facility. If someone works out and then either shows symptoms or tests positive for COVID-19, there is a set of protocols in place to disinfect the building in a timely and thorough manner.

Students and faculty need to make an appointment to utilize specific equipment in a socially distanced pod that staff members prepare prior to their arrival, rather than how they would be able to walk in and use what was available last year. Staff members place mats, limited weights, and other items requested for the workout. The appointments are available from 6 a.m. to 9:20 p.m. in 45-minute increments so that employees can sanitize the workstations between reservations. Appointments can be made as late as the day of depending on time slots open.

The reopening plan is an adjustment, but Reilley said he believes that it has gone smoothly over the first two weeks, prior to all students being back on campus. He said it has been a process for the staff and students to get used to, but it is nothing that has him concerned for the long-term outlook for the Fitness Center over the semester.

“The first few days were a little slow getting people checked in,” Reilley said. “Weather has thrown us a curveball … the demand on strength [equipment] and the lack of demand on cardio [equipment] was flat out surprising. We are going to reconfigure some things to create more opportunities for strength training.”

There will be a survey sent out in the future to receive feedback from students and faculty, but he said he has not heard any criticisms of the center yet that require an immediate solution. He said he is focused on making the Fitness Center feel the same as it did pre-pandemic, and his top priority is safety.

On the night of Jan. 30, Reilley was notified of a potential exposure within the Fitness Center that day, and all appointments would need to be canceled the next day in order to sanitize the building. Reilley notified his staff, and students who had reservations scheduled were emailed in the morning. A separate and confidential contact tracing also took place, as those who were deemed close contacts to the potential exposure were emailed as well. The Fitness Center reopened on Feb. 1.

Reilley said that the first week started off slow, with approximately 75–100 guests per day. However, the Fitness Center saw an uptick in attendance during its second week, with 150–175 guests per day.

Sophomore soccer player Brendan Lebitsch worked as a recreational sports official last spring before transitioning to Fitness Center Crew this semester. Instead of hiring new student staff members for this semester, Reilley said he had employees like Lebitsch change their role. Similarly to Reilley, Lebitsch said he thinks the reopening has gone well.

“No one has really complained, so that’s a great sign,” Lebitsch said. “I was a little worried at the beginning about the setup, but people enjoy it. I think Sean [Reilley] did a great job setting up the pods. They did a great job pairing the equipment. I commend them for doing a great job with that.”

The Fitness Center has seen more students and faculty reserve time slots over the last week, and Lebitsch said heanticipates that even more will sign up for appointments.

“I think a lot of people did not know the protocol, and everyone is still coming back,” Lebitsch said. “But it’s been getting a lot busier. It wasn’t that busy in the beginning, but now it’s starting to trend upwards. It’s been picking up traction, and I think everyone is still settling in. I would definitely recommend it just to get out of your room and have some free time in the gym.”

O’Leary said she has used the Fitness Center because the Hill Center, where the volleyball team usually trains, was only opened for teams currently training in-season, and she does not have a car. Though she said she is pleased with how the Fitness Center has adjusted, she admitted that once she gets her own vehicle, she will likely purchase a gym membership at the local Planet Fitness.

“I can stay there longer because the [Fitness Center appointments] are only 45 minutes, and I can go whenever I want to at Planet Fitness,” O’Leary said. “You can just do more. You have more freedom at that gym.”

Lebitsch lived in Ithaca during the fall semester and needed a gym to work out at, so he said he purchased a Planet Fitness membership and continues to use it. Lebitsch said while he does not like the 45-minute windows for working out on campus, he does believe that the Fitness Center has some advantages over other gyms in Ithaca.

“If you want to use multiple machines, some people use Planet Fitness,” Lebitsch said. “But it’s also really crowded, you don’t know any of the strangers you’re with, and the sanitation is a little iffy there. At Planet Fitness, it’s up to you if you clean your machine, where at the Fitness Center, we clean it for you.”

Reilley said he is hopeful that if all goes well, the Fitness Center will operate similarly to off-campus facilities as early as Block II in the spring semester.

“One of the starkest contrasts between our operation and local gyms is here, you reserve your time slot and your specific workstation,” Reilley said. “Other places, you reserve your time slot and I think you have more free range of the facility. Once people have a good idea of what the workflow is here as far as physical distancing and disinfecting, I think we can progress to that same point.”

For more information regarding the Fitness Center or to set up an appointment, visit recreation.ithaca.edu.