In the middle of the afternoon rush in the Ithaca College fitness center, exercise science major Derek Hessing is in his own bubble, leading six people through body-weight exercises in a corner of the Mondo Floor Gym.

As the class begins its warm up, Hessing, clad in khakis and a black polo, makes sure to do every exercise first to set an example for his class.

“Keep it nice and low,” he says, carefully watching as his class performs a series of bear crawls on a long blue mat.

The class then makes its way over to the far back corner of the gym to begin the strength section of the class. Hessing pairs up with Kim Wojtanik, administrative assistant in the Department of Education, to perform a series of kettlebell squats. After he finishes his portion of the set, he passes the kettlebell off to Wojtanik and kneels down next to her, examining her form.

Wojtanik then performs another squat, and Hessing throws his hands up with excitement as she finishes her set.

Hessing, a former marine who began attending the college in the fall, created the Inner Strength fitness class this semester. The class is held Tuesdays and Thursdays from 5 to 6 p.m. and currently has six participants. Members of the class had to sign up in advance to take the class.

“Essentially, it is a fitness class that is designed to give you skills and abilities that can transfer outside of the gym,” Hessing said. “As opposed to a lot of group fitness classes you might go to where the goal is just to go and get a workout, get sweaty, the Inner Strength class is designed to teach you movement concepts and teach you certain attributes that will benefit you in daily life.”

This wasn’t something he imagined himself doing, having gone to school for music education at Drake University, from which he graduated five years ago. 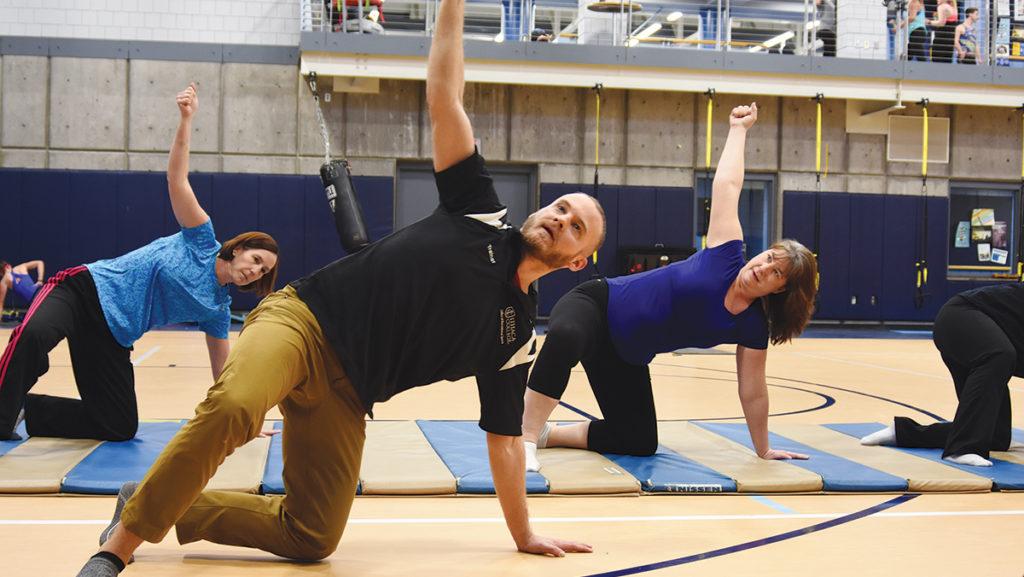 “When I finished my degree of bachelor in music education, I had several options,” Hessing said. “It was either go be a band director, go onto grad school, be poor or join the Marines because they had a musical group I wanted to go into.”

He ended up joining the Marines and was in the Commandant’s Own, a military music organization, for five years. The band played in front of thousands of people, including senators, military leaders and foreign ambassadors. Hessing was lead soprano bugle and was also a ceremonial bugle, meaning he played the daily wake–up call and played during official military funerals at Arlington National Cemetery.

While in the Marines, he was based in Washington, D.C., and discovered his love for health and fitness — something he wanted to do for the rest of his life.

“I started coaching different Marines different things — what to do to be more effective in the gym and to hurt yourself less,” Hessing said. “I also started working at a parkour gym in D.C. I started working with mostly middle-aged folks, the type of people who have sat in a chair for long enough and forgotten how to move, so we needed to rehabilitate how to move.”

When he arrived at the college in the fall, Hessing originally reached out to Sean Reilley, program coordinator of recreational sports, about becoming a personal trainer. During the interview for the personal fitness job, he mentioned an idea he had for a different type of group fitness class. Hessing was hired for the personal fitness job, and a couple weeks later, Reilley reached out to him about creating the class he talked about during the interview.

After the strength portion, Hessing takes the class into a huddle next to a small whiteboard with the next set written on it. Before he teaches them the set, he explains to them what they should be feeling while performing it.

“Squeeze your fist about 20 percent,” he says. “Notice where you feel the tension. Now, move your neck around a little bit make sure you aren’t keeping any tension. The three big spots you want to use to improve that tension are grip, abs and butt.”

The class then holds up fists and releases to feel the effect Hessing was talking about. Next, Hessing hands out white bars with no weights on them.

“I’m going to inhale and pull myself down to a deadlift and back up,” he says while demonstrating the lift. “The whole way, I’m going to be squeezing everything I’ve got to make the lift happen.”

Together, Hessing and the class performs three lifts. At the end, the participants pause and look to Hessing for the next direction. 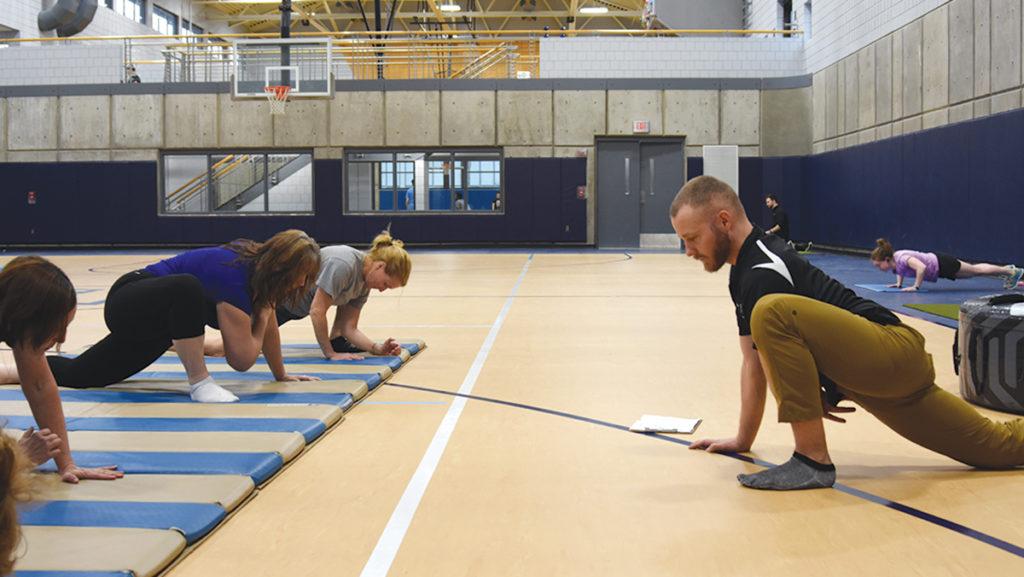 “Shake it out now,” he says, moving the bar off to the side to shake out his muscles.

The class is tailored toward middle-aged women, giving them a different type of fitness class than they are used to.

“I feel like people in that demographic don’t have a good home in the fitness world right now,” Hessing said. “They seem to really enjoy it, and I’m giving them an entry into the fitness world that people didn’t think would be open.”

Sherri Dunham, administrative assistant in the Department of Theatre Arts, said she was bored with doing the same thing in the gym every day, so she joined the class to try something new.

“I turned 50 this year, and I’m needing to be fit,” Dunham said. “I feel better week to week. I work pretty stressful hours, so it just makes me feel better about working nine–hour days and I feel better all around.”

Wojtanik said all of the members of the class work together in the School of Humanities and Sciences. She said she has been impressed with how the class has helped her.

“Seeing how I have been able to build my strength is a benefit,” she said. “When we did our first assessment, he was nice and said I was doing well, but now, seeing my growth is really beneficial.”

The class concludes with a seven-minute circuit. There are three different stations: a tire walk, bear crawl and kettlebell squats. Members of the class split off to stations, and Hessing moves between the stations, helping the participants.

“It’s not a race; it’s a beauty contest,” he says while clapping his hands in encouragement.

Hessing said he hopes to be able to expand the class in the future and is currently looking into adding new sessions for next year.

“It’s a really cool experience; I’m super grateful to have this,” he said. “I’m learning so much, and I feel like I’m getting a head start into what I’m going to be doing in my future.”