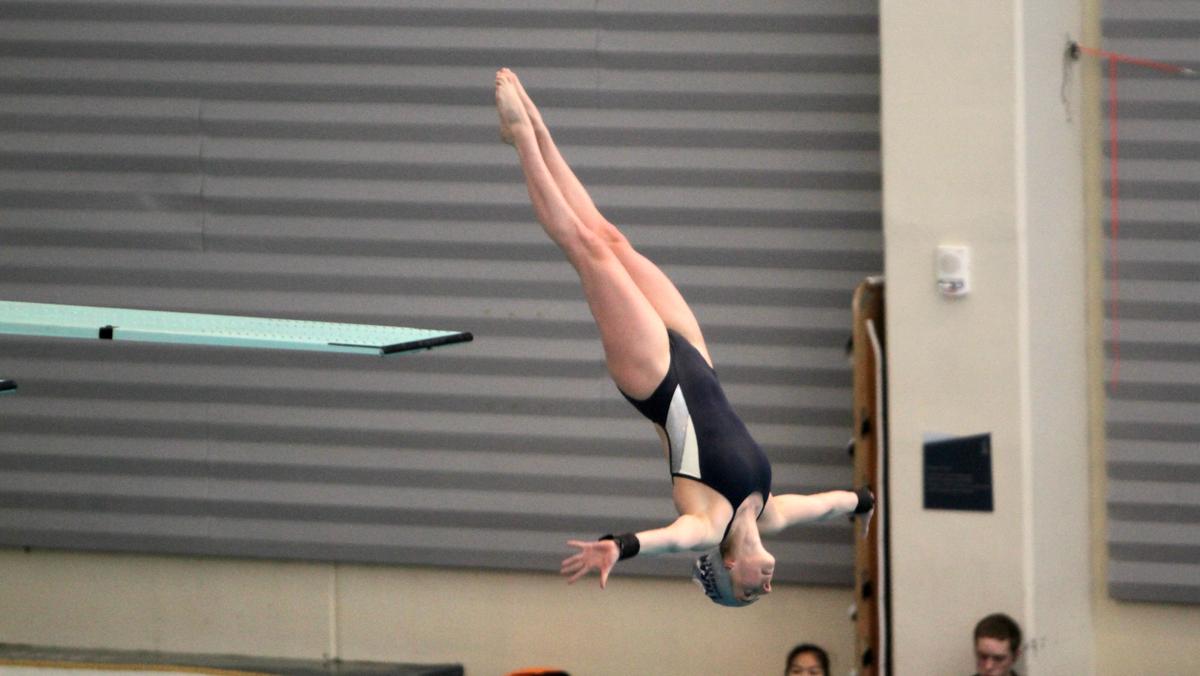 Before springing off the diving board, performing flips and spins in the air and diving headfirst into a pool, divers on the women’s swimming and diving team dance and listen to music as they warm up. Then they perform and continuously fill spots on the winners’ podium.

As their first season in the Liberty League Conference is coming to a close, five Bombers will be continuing their individual seasons at the NCAA Division III National Championships.

Graduate student Nickie Griesemer and seniors Lindsey Suddaby, Anna Belson, Katie Helly and Alyssa Wishart will represent the Bombers in Indianapolis March 21–24. This will be Griesemer’s fourth trip to nationals. Belson and Helly will be making their third trip, Suddaby her second and Wishart her first.

Belson said it is exciting to have the five teammates represent the Bombers for the first time all together.

“I truly think we have a bond that no one else has,” Belson said. “And getting to step out on a national stage with your closest friends and teammates next to you is untouchable.”

However, it was not an easy ride for any of the women to get to where they are now, Belson said.

Qualifying for nationals began on day one of the NCAA Division III Region Four Championship March 2. In the 1-meter, Griesemer placed first with 479.20 points. Suddaby and
Belson placed third and fourth, respectively, to also qualify. Wishart placed fifth and qualified for nationals due to her score. Helly placed eighth and did not qualify in the 1-meter.

In the 3-meter, Helly placed second behind Griesemer with a score of 488.60 points to earn her bid to nationals.

These five will be a part of the 29 women divers competing at nationals in Indianapolis. To make the event more special, it is the program’s 50th year, head coach Paula Miller said.

Helly said the team has made progress since her first year and since diving coach Chris Griffin joined the coaching staff three seasons ago.

“I think our progress is because of each other,” Helly said. “I think Chris came in at that perfect time where we needed someone to be there, and he knows how to push us. … We want success because we want him to have success too.”

Griffin said that when he came to the college, immediately he was able to work well with the women.

“It allowed us to set some high goals and standards and continue to push forward to it,” Griffin said. “Without their work ethic and their determination, a lot of that stuff might not have actually come true.”

Belson said they all have improved greatly on dives they had thrown in the past. The women have also incorporated new dives into their lists.

“When you look at our DD [degree of difficulty] compared to other schools DD’s, our difficulty outweighs most other peoples’ difficulty,” Belson said. “Not only do we out score, but we outdo other teams with the difficulty of dives.”

A week prior, at the Liberty League Championship, the swimming and diving team took second. The Bombers swept the podium in the 1-meter dive, claiming the top five spots. Griesemer led with a total score of 505.70, which shattered the previous meet record of 443.20. Suddaby, Belson, Helly and Wishart placed second through fifth, respectively.

In the 3-meter, the Bombers placed six members on the podium. Griesemer broke another meet record and stood atop the podium with a score of 536.80. The former record was 473.25. She was named Female Diver of the Meet. Helly and Suddaby rounded out the top three. Belson placed fifth, and Wishart placed sixth.

Miller said what makes this team so special is the way they care about each other.

“They really, truly support each other,” Miller said. “They have fun, and it’s just a unique, wonderful group. And it’s been fun.”