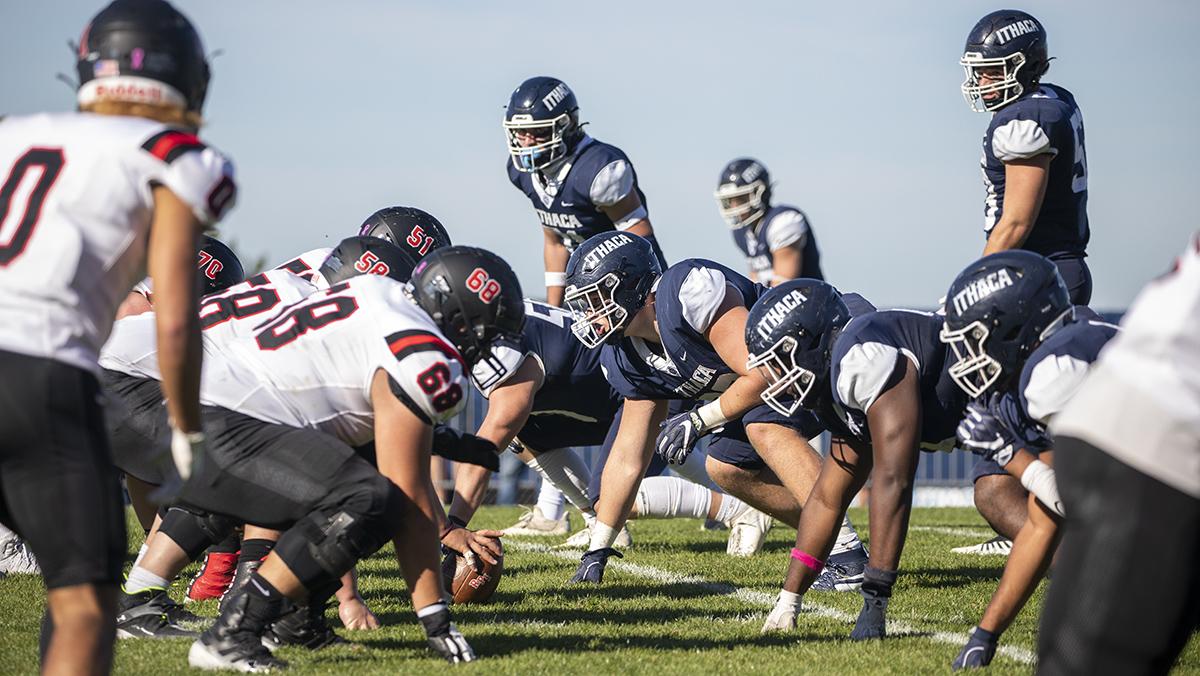 The Ithaca College football team defeated the Rensselaer Polytechnic Institute (RPI) Engineers in a 13–10 thriller Oct. 29 at Butterfield Stadium. This was the first time the college has beaten RPI since Nov. 24, 2001. The victory improves the Bombers’ record to 8–0 on the season.

The defense was the story of the afternoon, resulting in a close game until the clock hit zero. The Bombers were stellar defensively, limiting the Engineers to 65 rushing yards and converting just seven of their 17 third down attempts. Graduate student defensive back Michael Roumes came up with a clutch interception late in the fourth quarter for the Bombers, stifling the opposition’s chances of evening the score or taking the lead. 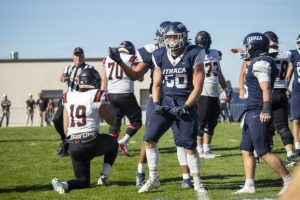 The South Hill squad got the job done offensively with a balanced effort, recording 140 rushing yards and 135 passing yards. Senior quarterback A.J. Wingfield posted the team’s only touchdown of the afternoon, while ranking third on the team with 31 rushing yards. This was the senior’s highest total of rushing yards in a game this season. Wingfield said he and the team utilized his running ability because it was a different approach than previous weeks.

“That was a part of the game plan,” Wingfield said. “They have a really good defense. … We felt our advantage though, was I haven’t ran a lot this year. We thought our advantage was me climbing and me running.”

The defenses of both teams dominated during the first quarter of the game, as the offenses were kept off the scoreboard. But the Bombers’ offense started to get going toward the end of the frame, moving the ball 80 yards down the field during the final 9:12 to set up a second-and-two scenario at the Engineers’ two-yard line.

The South Hill squad wasted no time ending the game’s offensive silence at the start of the second quarter, taking a 7–0 lead against RPI with 14:55 remaining. Wingfield found the end zone on the first play of the quarter, running past the goal line for a two-yard touchdown rush. Senior kicker Nicholas Bahamonde followed this with a successful extra point attempt. 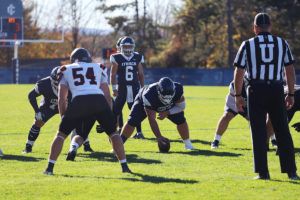 The defenses continued to dominate through the second quarter, as neither team put points on the board during the remainder of the first half. The Engineers had an opportunity to score toward the end of the second frame, but first-year student kicker Aleksander Maric sent his 28-yard field goal attempt off the left upright as time expired. This was the second field goal Maric missed in the first half.

The Bombers took a 7–0 lead into halftime, which is the team’s narrowest advantage through the first two quarters of play so far this year.

RPI struck first in the third quarter, trimming the South Hill squad’s lead to 7–3 with 7:51 to go. Maric got the Engineers on the scoreboard with a 30–yard field goal try that sailed through the uprights.

The Bombers put a few more points on the board later in the third, extending their lead to 10–3 with 2:35 left in the quarter. Bahamonde converted a 29-yard field goal attempt, providing the college with a seven-point advantage.

The Engineers’ offense came to life in the fourth quarter, tying the game at 10–10 with 11:01 remaining in the game. Sophomore quarterback Jake Kazanowsky completed a 35-yard touchdown pass to senior wide receiver Deen Ninche in the left corner of the end zone. This was followed by a successful PAT from Maric.

The Bombers took the game back with 7:44 left to play, making it a 13–10 ballgame in the college’s favor. Bahamonde came through in the key spot by powering a 27-yard field goal through the uprights. Head coach Michael Toerper said he felt the team bounced back well after the Engineers evened the score.

“When they scored that touchdown, I looked at our sideline and we were a little silent for a second,” Toerper said. “I wanted to make sure that they understood that there’s a lot of game left and we’ve just got to keep playing. We didn’t know how, who, why [or] when we were going to win the game. But, we knew if we just kept fighting and fighting and fighting, we were going to win.”

RPI’s offense threatened as the fourth quarter was winding down, facing third-and-six at the South Hill squad’s 33-yard line with 3:13 to go. Kazanowsky threw a pass toward the right side that was intercepted by Roumes, halting the Engineers’ rally. The catch prompted the home sideline to erupt. The senior defensive back said he was happy to come through for the team in a critical situation.

“Immediately, I was mobbed [by the whole team],” Roumes said. “Just a sea of blue [was] in my face. … It was one of the best feelings.”

This would ultimately hold as the final score, as neither team would put points on the board during the rest of the game.

The Bombers will return to the gridiron at noon Nov. 5, as the team will travel to take on Union College. Toerper said he is looking forward to taking on the second-place team in the Liberty League next week, equating the matchup to a postseason contest.

“Every win is very important,” Toerper said. “We’re in great shape to make a playoff push right now. Next week is a playoff game, we know that and we’re really excited about it.”