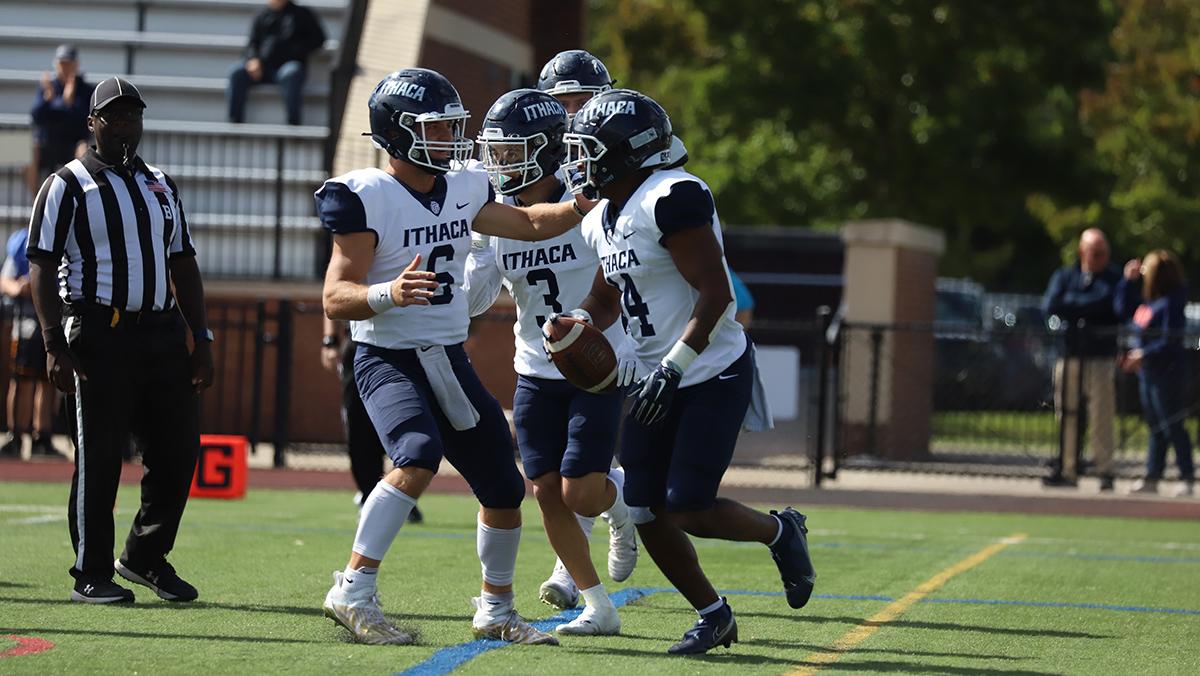 The No. 13 Ithaca College football team defeated Hobart College 31–7 Oct. 1 at Boswell Field at David J. Urick Stadium in Geneva, New York. The victory in the squad’s Liberty League opener improves the program’s record to 4–0 on the season.

The Bombers’ offense had a productive afternoon, recording 186 passing yards and 143 rushing yards. The team relied on several contributors during its fourth win of the season, as senior quarterback A.J. Wingfield, senior linebacker Jason Haber and junior running backs Jalen Leonard-Osbourne and Jalen Hines, each scored touchdowns during the contest.

The South Hill squad’s defense continued to impress, holding the opposition to 83 rushing yards and 137 passing yards. The college held Hobart to converting just four of its 12 third down attempts. The Bombers allowed one touchdown during the ballgame, which was the first trip to the endzone the team’s defense has given up since the third quarter of its season-opening 51–14 victory against Bridgewater State University on Sept. 3. 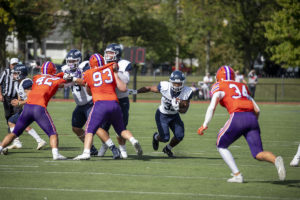 Junior running back Jalen Hines looks for an opening as the Bombers faced off against Hobart College on Oct. 1. Nolan Saunders/The Ithacan

The defenses of both the Bombers and the Statesman were dominant in the first quarter of the game, as neither team put points on the board. The South Hill squad started to get the offense going toward the end of the first quarter, ending the stanza at Hobart’s one-yard line.

The college opened the scoring at the start of the second quarter, as Hines ran into the endzone for a one-yard touchdown rush with 14:56 remaining. Senior kicker Nicholas Bahamonde then sent the extra point through the uprights to give the Bombers a 7–0 lead against the Statesman.

The South Hill squad got the ball back with 10:33 left in the second, as senior defensive back Derek Slywka intercepted the pass of Hobart quarterback David Krewson, and returned the ball to Hobart’s 38-yard line.

Wingfield then passed the ball backward to senior wide receiver Billy Tedeschi, who found Leonard-Osbourne in the left corner of the endzone for a 30-yard touchdown pass with 9:26 to play in the quarter. Bahamonde followed this by converting the PAT, providing the Bombers with a 14–0 advantage. Head coach Michael Toerper said he was impressed by the team’s ability to pull off the unconventional play.

“That’s one we’ve been working on for a while,” Toerper said. “It was a perfect call by [offensive coordinator Sean Reeder]. He did a great job setting it up and getting there with tempo and just catching the other team off guard. … We were throwing it into the wind, so I was slightly concerned, but it got there.” 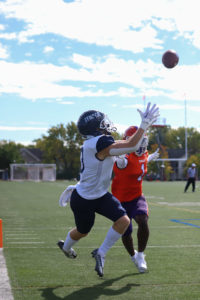 Tedeschi said the team was prepared to attempt the play once it got the ball back on the interception by Slywka.

“We got the turnover like we wanted,” Tedeschi said. “We knew it was coming, I just had to throw it as far as I can. Jalen [Leonard-Osbourne] is the fastest kid in the country, [he’s a] track star. [I] just had to put it out there [and] let him run under it.”

The South Hill squad didn’t stop there, extending its lead to 21–0 against the Statesman with 9:11 left in the first half. Hobart’s offense faced first and 10 and its own 37-yard line, when the snap went over the head of Krewson and the fumble was recovered by Haber. The senior then took the ball to the house for a 21-yard touchdown return. Bahamonde’s extra point attempt was successful after the score.

Neither squad scored during the remainder of the second quarter, allowing the college to enter halftime with a commanding 21–0 lead.

The Bombers’ offense continued its successful afternoon in the third quarter, making it a 28–0 ballgame. Wingfield ran into the endzone for a one-yard touchdown rush, with 7:51 remaining in the quarter. Bahamonde tacked on another point with his fourth successful PAT of the contest.

The South Hill squad added three more points as time expired in the third quarter, extending its lead to 31–0 against the Statesman. Bahamonde powered a 48-yard field goal through the uprights, which marks the senior’s career high.

Hobart got on the scoreboard with 4:57 left in the ballgame, trimming the Bombers’ lead to 31–7. Junior running back Tim Denham Jr. ran into the right corner of the endzone for a 19-yard touchdown rush. This was followed by a successful extra point attempt by sophomore kicker and punter Tobias Wefering. 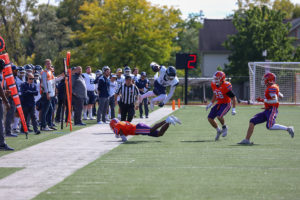 This would hold as the final score, as neither team would add on during the remainder of the game. Toerper said he was impressed by how the team competed against Hobart, and he is looking for the squad to build upon the victory as it continues Liberty League play.

“Our guys prepared all week the way they should,” Toerper said. “They [stayed] focused, they were loose but focused. I love our team’s energy right now. We’ve just got to keep getting better and … really continue to play complimentary football across the board.”

The Bombers will return to action at 1 p.m. Oct. 8, as the team will host the University of Rochester at Butterfield Stadium.