Football comes out on top against St. John Fisher College 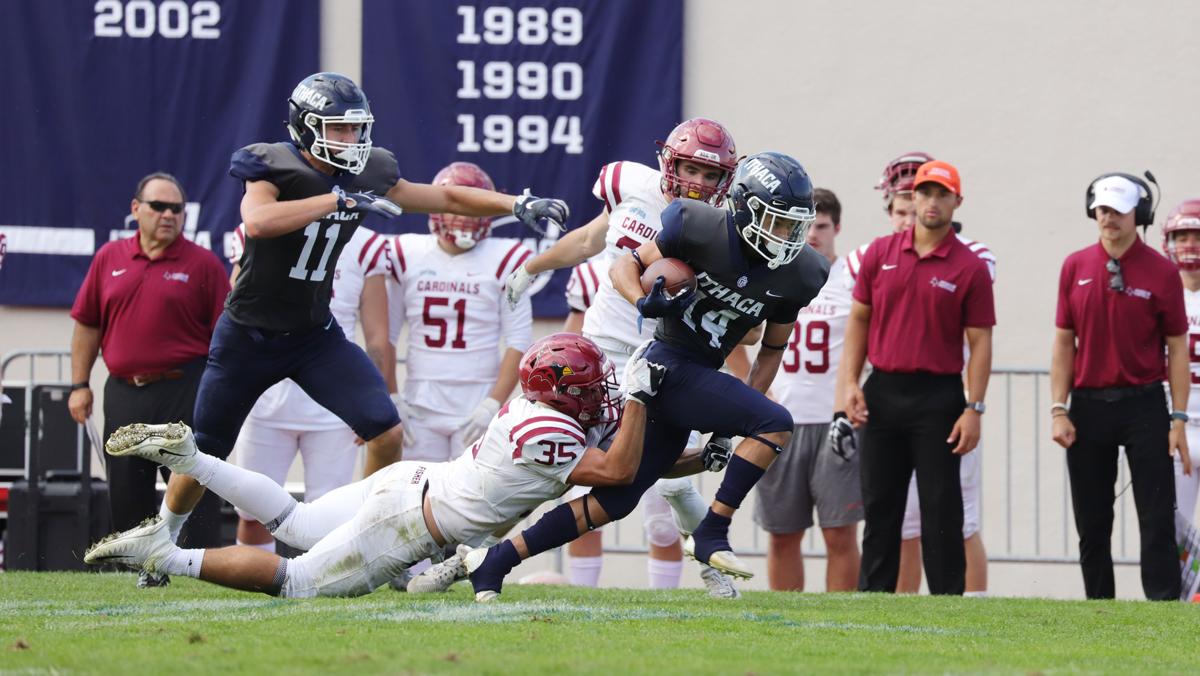 The No. 13 Ithaca College football team defeated St. John Fisher College in a thrilling 38–35 victory Sept. 28 at Butterfield Stadium. The non-league victory moved the Bombers to 3–0 on the season and dropped the Cardinals to 3–1.

After a three-and-out from the Cardinals, the Bombers got possession of the ball on their own eight-yard line. Senior quarterback Joe Germinerio completed passes to sophomore wide receivers Michael Anderson and Jacob Cooney for significant gains and then a penalty later pushed the Bombers to their own 47-yard line. On the next play, Germinerio hit senior wide receiver Will Gladney with a pass that led to a 57-yard touchdown for the Bombers.

The teams traded punts until senior captain Nick Garone was able to force a fumble deep in Cardinal territory with 6:14 left in the first quarter. On the first play of the new drive, Anderson punched the ball in from the 35-yard line and gave the Bombers a 14–0 lead.

The Cardinals drove down the field and were able to pick up a field goal on their next drive, cutting the lead to 14–3 at the beginning of the second quarter. On the Bombers’ next possession, Germinerio hit Anderson for a 28-yard reception and soon after hit Gladney for a 30-yard touchdown, the second touchdown between the two seniors during the game. After freshman kicker Nicholas Bahamonde hit the extra point, the score was 21–3.

The Cardinals turned the ball over on downs on their following possession, and the Bombers took over on their own 48-yard line. Germinerio rushed for 14 yards, and after a 2-yard run from senior running back Kendall Anderson, hit Gladney for the third time with a 36-yard touchdown pass to give the Bombers a 28–3 lead.

The Cardinals finally responded on their next drive when Cardinal freshman quarterback Hunter Walsh connected with senior wide receiver Will Blake for a 67-yard touchdown pass. The Bombers then responded with a touchdown of their own when senior running back Isaiah D’Haiti broke away for a 32-yard rushing touchdown giving the Bombers a 35–10 lead.

The Cardinals drove deep into Bomber territory on their next possession but only got a field goal out of it. The teams then traded punts before Bahamonde hit a 47-yard field goal as time expired, making the halftime score 38–13.

The Cardinals punted on their first drive of the second half, but on the Bombers’ drive, Germinerio’s pass was picked off by Cardinal sophomore defensive back Anthony Manna. Fisher drove down the field and capitalized when Walsh ran it in from 14 yards out, making the score 38–20.

A good punt from freshman kicker Enzo Martellucci pinned the Cardinals on their own 10-yard line. However, Walsh connected with junior wide receiver Tysean Sizer for a 90-yard touchdown on the first play of the drive, making the score 38–27.

Germinerio hit Michael Anderson for a 38–yard reception on their next drive, but nothing came of it, and the South Hill squad was forced to punt the ball away. The Cardinals then had a lengthy drive that ended with sophomore running back Dahmir Pross punching it in from the one-yard line. Walsh then connected with Blake for a two-point conversion, cutting the Bombers’ lead to just three points at the start of the fourth quarter

The teams traded punts on their next possessions before the Bombers drove deep into Cardinal territory with just under 6:00 remaining in the game. However, Germinerio’s pass was intercepted for a second time by Manna in the endzone.

The Cardinals drove down to the Bombers’ 27-yard line, but were stopped on fourth down with 2:16 remaining. The South Hill squad couldn’t get much going on their next possession, and the Cardinals got the ball back with 1:11 remaining in the game.

On the Cardinals’ first play of the drive, Walsh’s pass was intercepted by junior defensive back Khiry Brown. After Germinerio took a knee, the Bombers secured the 38–35 win.

Brown said that an unsatisfactory practice on Sept. 26 led to some problems in the second half, but he said he was happy overall with the victory.

“We were battle–tested,” Brown said. “I think we showed a lot of good resilience in the game when it mattered. We had our worst practice of the year on Thursday and that might have put us in the position we were in during the third quarter, but it was a good team win and I’m not going to complain about a win.”

Head coach Dan Swanstrom said that although the game was not perfect, he was proud of his team’s persistence in bringing home the win.

“What an unbelievable first half; you couldn’t have scripted it any better,” Swanstrom said. “Then, what a terrible second half, which couldn’t have been scripted any worse. We are a young team, and I think we got a little lackadaisical with our focus and attention to detail. Other teams I have been a part of would have let this roll over into a loss, but our guys met the adversity with resiliency and we came out with a win.”