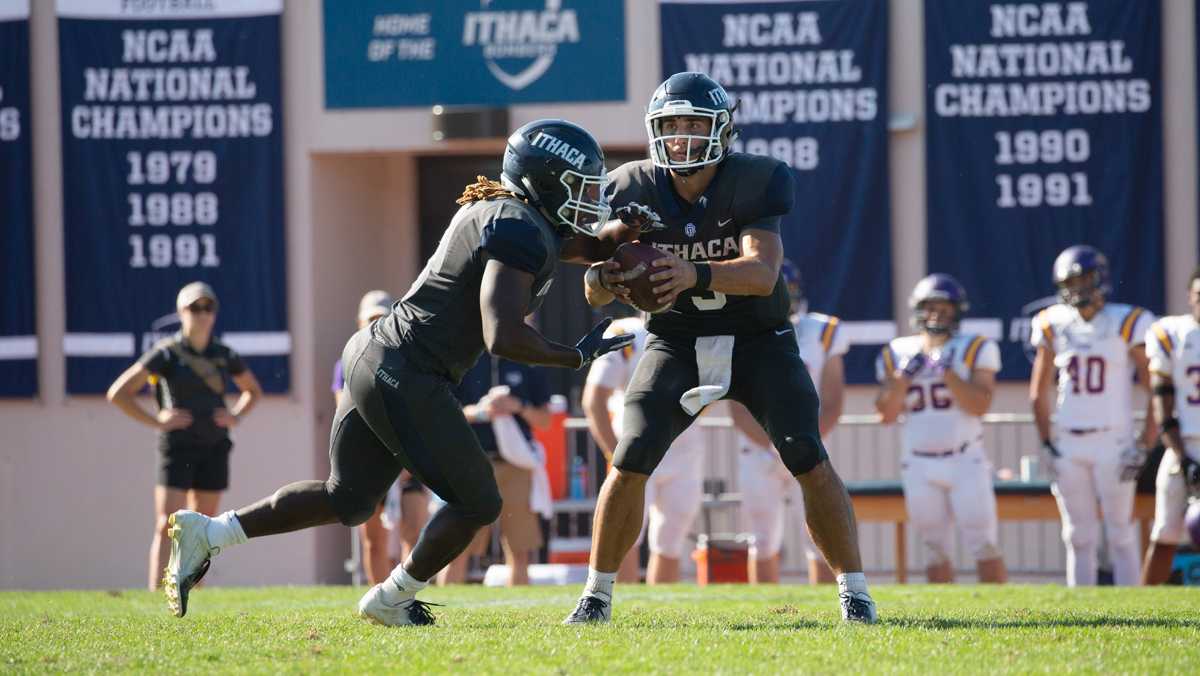 The Ithaca College football team defeated Alfred University 27–9 in its home opener at Butterfield Stadium. The nonleague victory improved the Bombers’ record to 2–0 this season.

It didn’t take long for points to get on the board, but the first strike came from the Saxons after they kicked a field goal on their first drive just under four minutes into the game. The South Hill squad then drove up the field, and freshman kicker Nicholas Bahamonde sent one through the uprights from 33-yards out to tie the score.

Alfred got deep into Bomber territory on their next drive but turned the ball over after a failed fourth-down attempt at the Bombers’ 25-yard line. The South Hill squad scored its first touchdown when senior quarterback Joe Germinerio ran it in from four yards to give the Bombers a 10–3 lead.

The highlight of the first half was a fake punt attempt by Alfred junior punter John McDonald-Horner. McDonald-Horner rushed the ball out of the endzone for a 29-yard gain and a first down with under 2 minutes left.

In the second half, the Bombers came out firing and their first drive ended in a four-yard touchdown run from senior running back Isaiah D’Haiti. After the touchdown, the Bombers attempted an onside kick and recovered it to keep possession of the ball in Saxon territory. Bahamonde capitalized on the opportunity, kicking his second field goal of the game and putting the South Hill squad up 20–3.

The Bombers and Saxons were both unable to put points on the board for the remainder of the third quarter, but the Bombers eventually increased their lead in the fourth when Germinerio threw a four-yard touchdown pass to sophomore running back Donte Garcia.

The Saxons responded with their first touchdown of the game on the next drive thanks to senior running back Aaron Griffin. The Saxons failed a two-point conversion attempt.

The South Hill squad held possession for the remainder of the game to secure the victory. Germinerio threw 27–4 with 249 passing yards, one throwing and one receiving touchdown, and one interception. D’Haiti led the running backs with 52 total yards, and senior Will Gladney led the wide receivers with eight catches and 90 yards.

Gladney said that he was happy with the performance of the team and hopes it can build off of the momentum for next week.

“The offense wasn’t on the field as much as we wanted to, but I thought it was pretty good overall,” Gladney said. “We are going to take it week by week and hope to improve for our next game.”

“All wins are good,” Swanstrom said. “They were a good football team, as they had 273 rushing yards against us, and they like to play close games and then win them at the end. We were able to keep that from happening.”

The Bombers are back in action next Saturday when they take on St. John Fisher College. The nonleague matchup will kick off at 1 p.m. Sept. 28 at Butterfield Stadium.