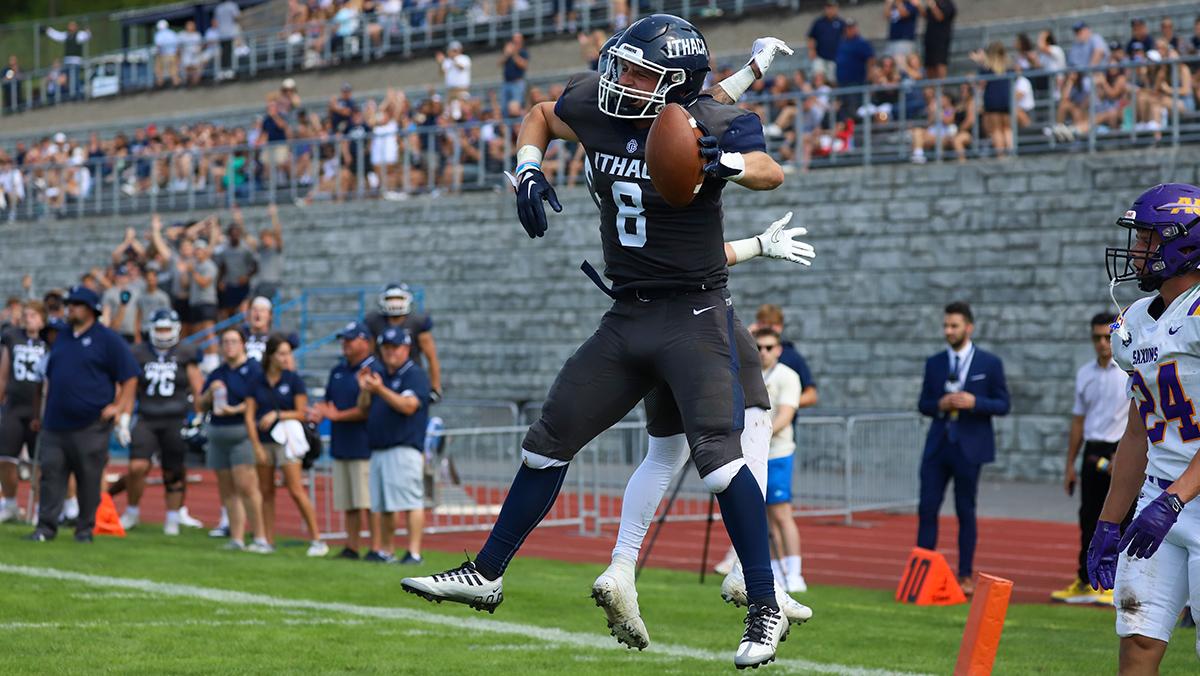 The Bombers’ offense was the story of the day, posting a total of 277 rushing yards and 233 passing yards. Junior running back Jake Williams led the team with two touchdowns, rushing for 42 yards during the contest. Senior quarterbacks Conner Hayes and Max Perry and senior wide receiver Billy Tedeschi were also among the players that made their way to the endzone.

The college delivered another stellar defensive performance, limiting the Saxons to just 58 rushing yards and 115 passing yards. The unit relied on several players to make an impact, as senior defensive back Stephen Soravilla, junior linebacker Jonathan Koumas, senior linebacker Matt DeSimpliciis and sophomore defensive back Danny Portas tied for the team lead with five tackles in the game.

The Bombers opened the scoring with 7:28 remaining in the first quarter, taking an early 7–0 lead over the Saxons. The college got the offense started with an 11-play, 76-yard drive that concluded with Williams storming into the endzone for a one-yard touchdown rush. Senior kicker Nicholas Bahamonde followed this by converting his extra-point attempt. The junior tailback said he credits his success in the contest to the team’s offensive line preventing Alfred from stopping its running game. 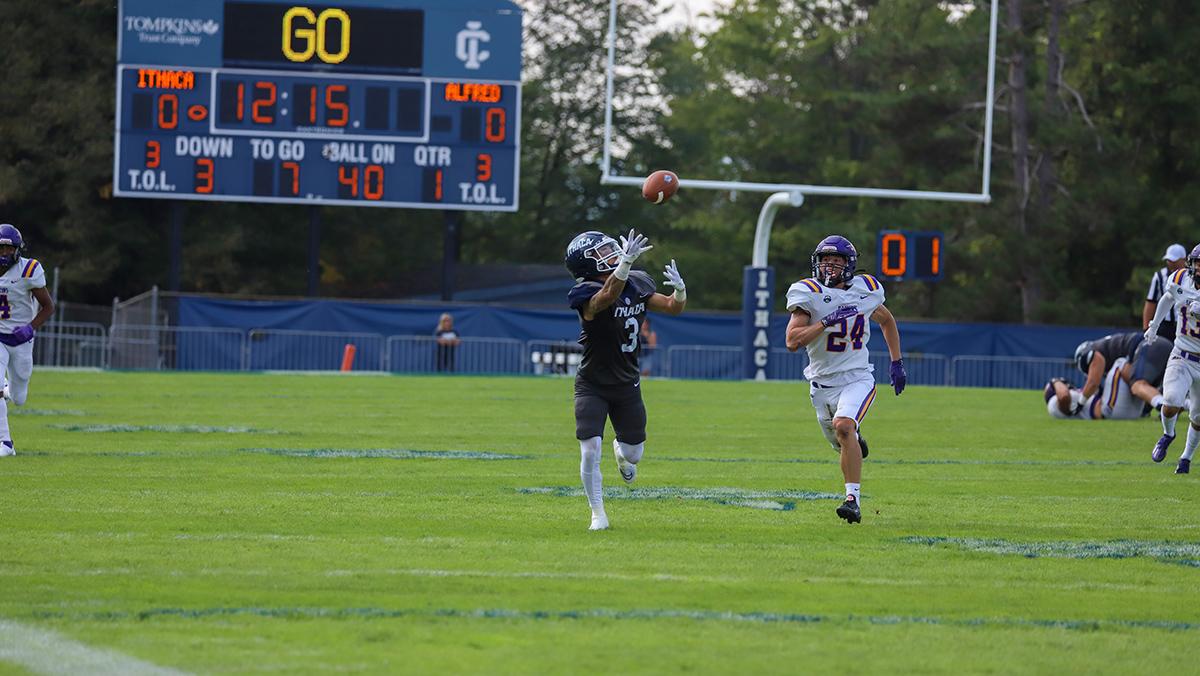 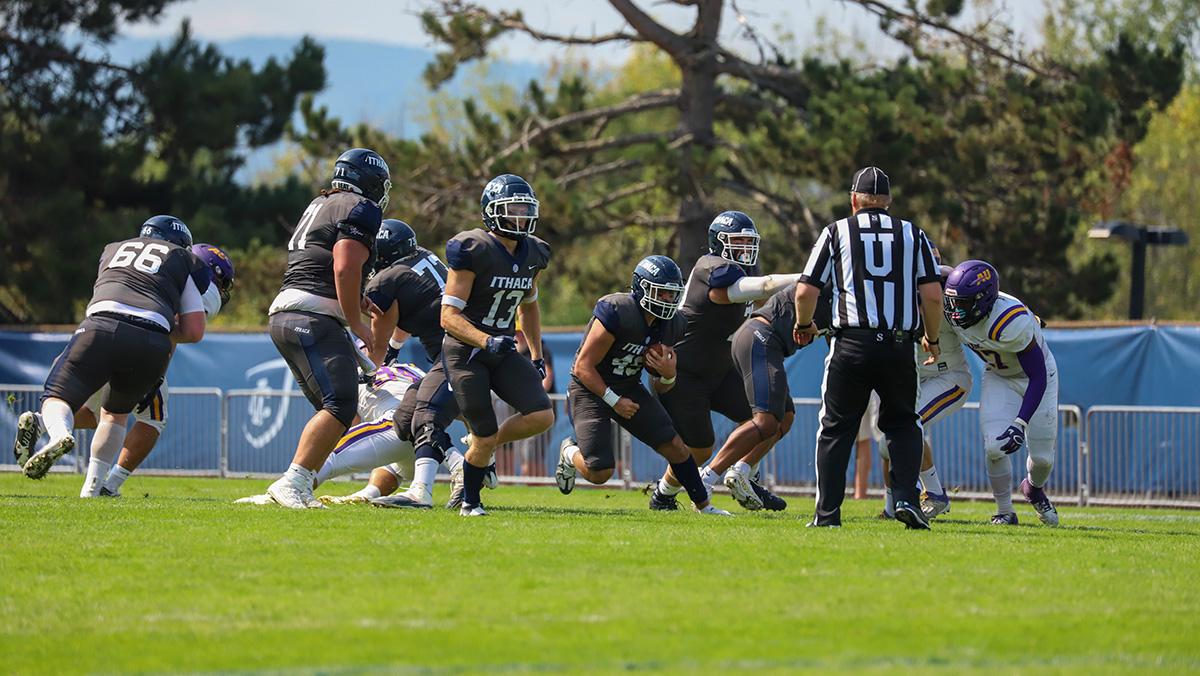 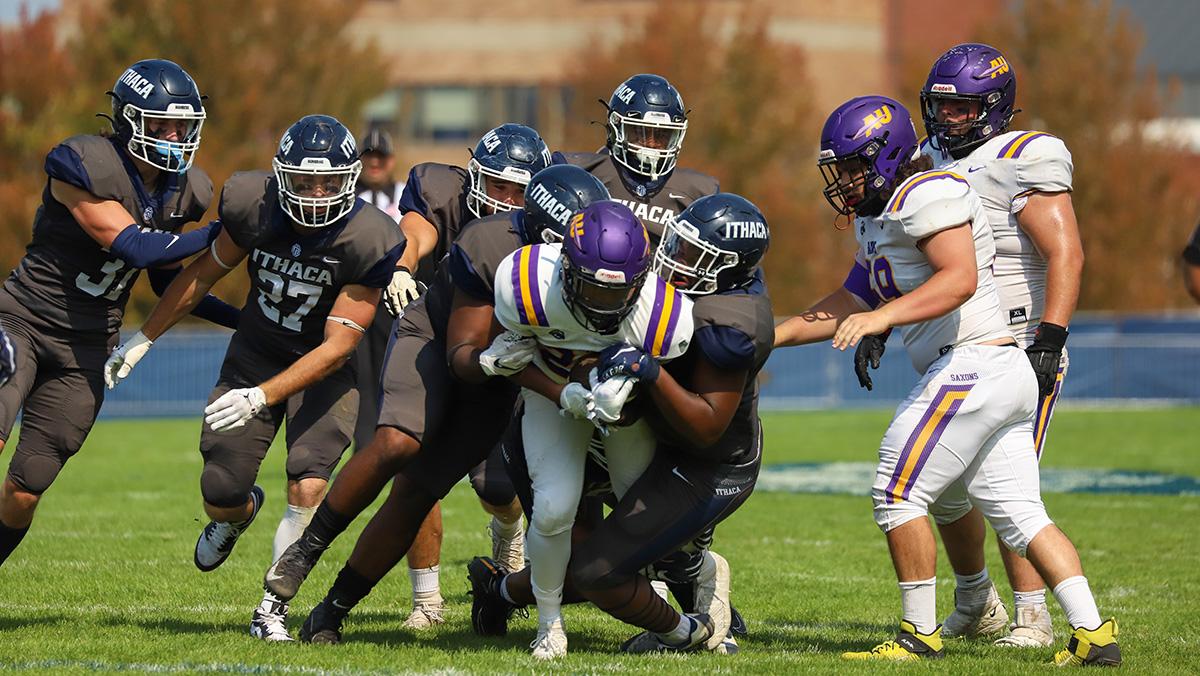 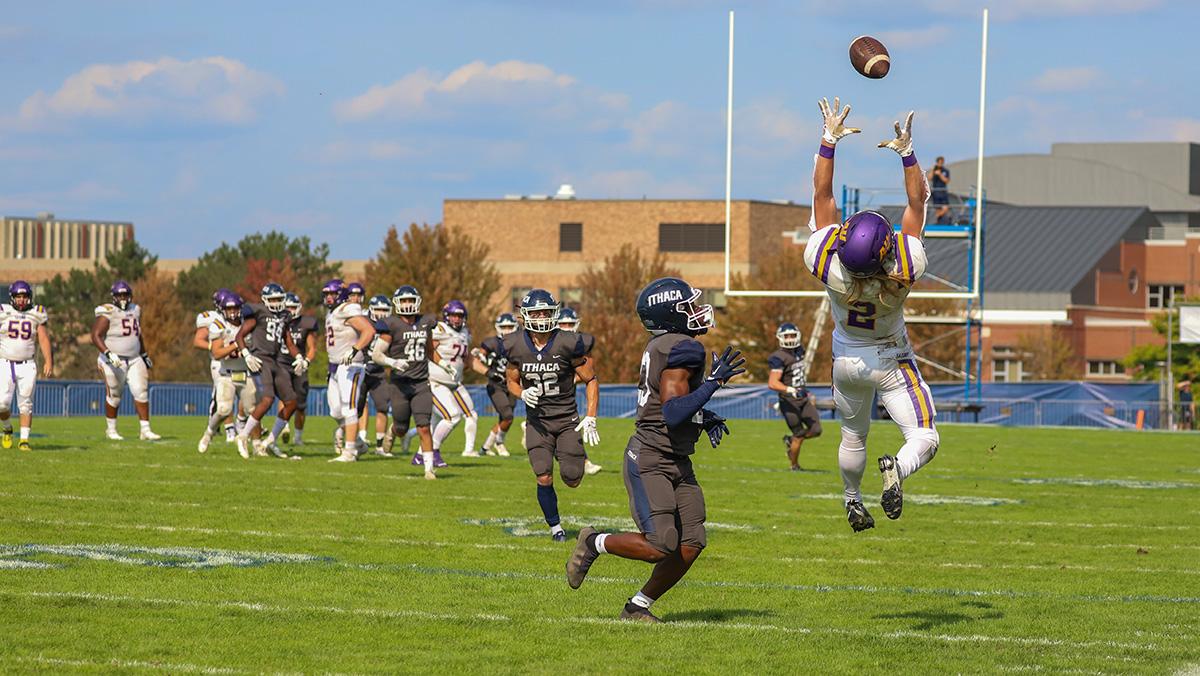 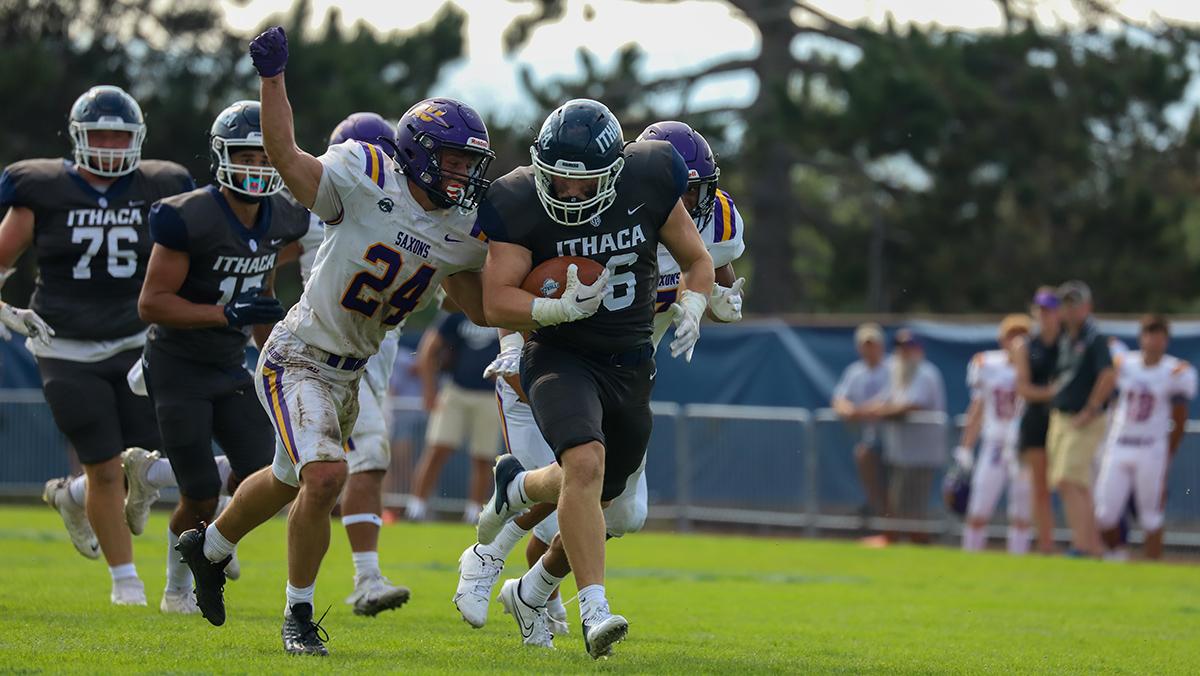 “It felt good just doing my job,” Williams said. “When the [offensive line] gives me holes, it’s easy for us running backs to do everything. …  I think we can go a long way if we just keep doing what we do.”

Alfred later responded with 2:49 to play in the first, narrowing its deficit to 7–3. First-year student kicker Ian Barbini got the Saxons on the scoreboard by sending a 23-yard field goal through the uprights.

The South Hill squad then made some noise early in the second quarter, extending its lead to 14–3 with 13:51 remaining. Williams recorded his second touchdown of the afternoon with a two-yard rush past the goal line. Bahamonde added another point with a successful PAT. Head coach Michael Toerper said he felt the Bombers took some time to get rolling offensively, but he was impressed with how the team competed on all sides of the ball.

“It was complimentary football [in] all three phases of the game,” Toerper said. “The energy wasn’t there right out of the gate, but a couple spark plays got it going. … We have to produce our own energy, and I thought we did a better job of that as we got through the end of the first quarter [and the] early second quarter.”

The Bombers kept the offense going with 5:00 left in the half, advancing their lead to 21–3 over the Saxons. Senior quarterback A.J. Wingfield completed an eight-yard touchdown pass to Tedeschi in the left corner of the endzone. Bahamonde then sent the extra point through the uprights.

Bahamonde further added to the South Hill squad’s lead with a successful 28-yard field goal attempt later in the quarter, making it a 24–3 ballgame. 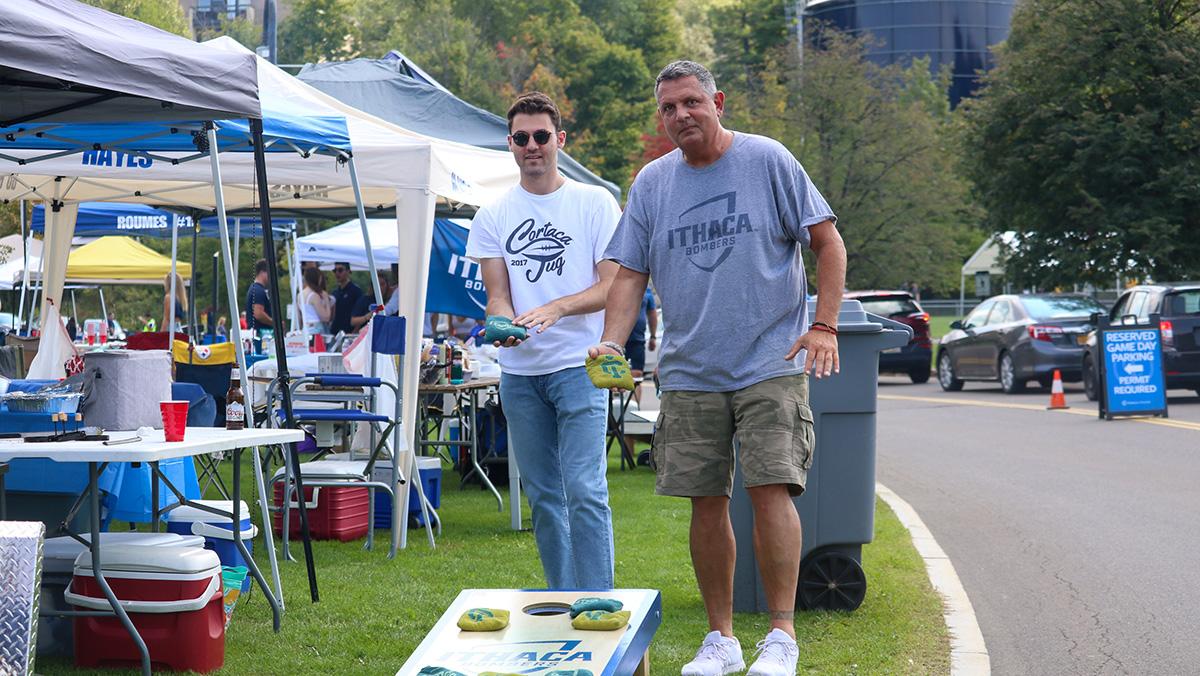 From left, Ithaca College alumni Jackson Rynar '20 and Craig Rynar '88 play lawn games together before the start of the game. Ana Gavilanes/The Ithacan 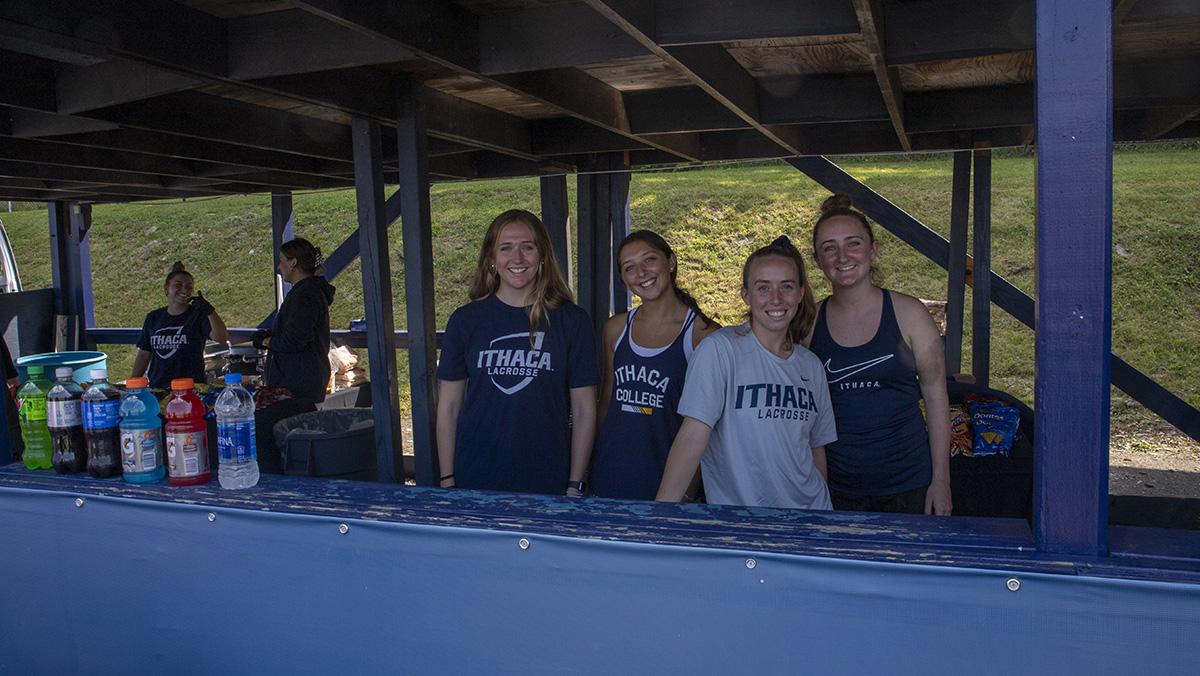 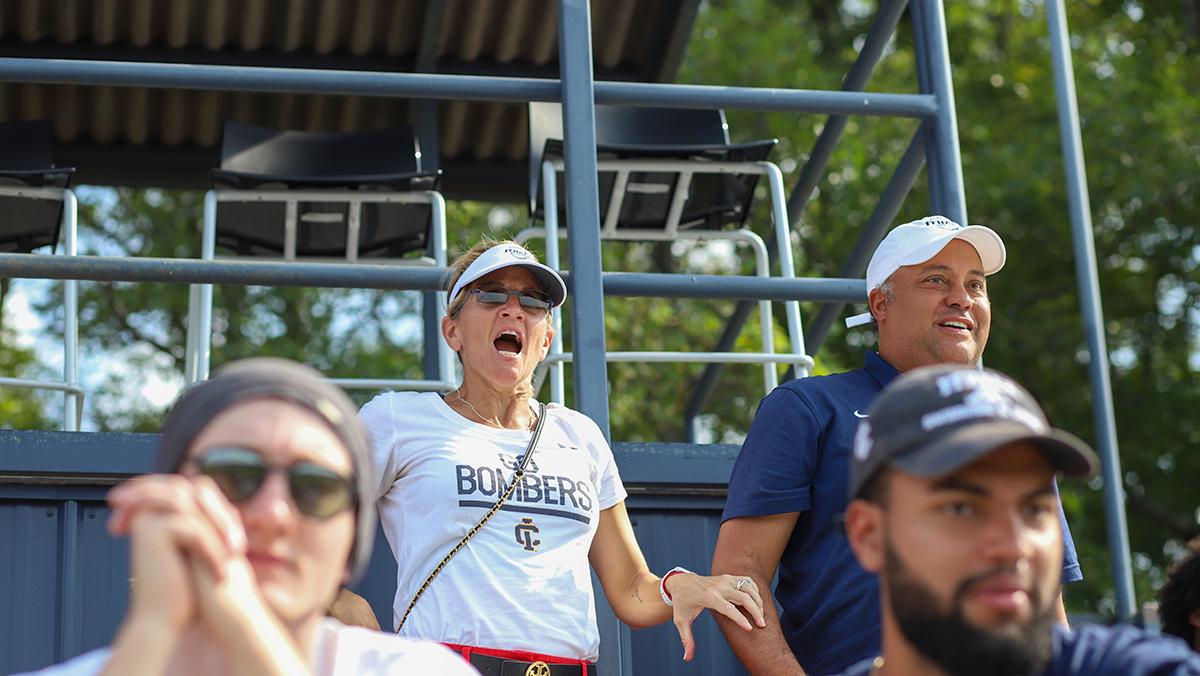 From left, Paula and Marc Perry, parents of senior quarterback Max Perry, cheer as the Bombers march down the field. Jasmine Scriven/The Ithacan 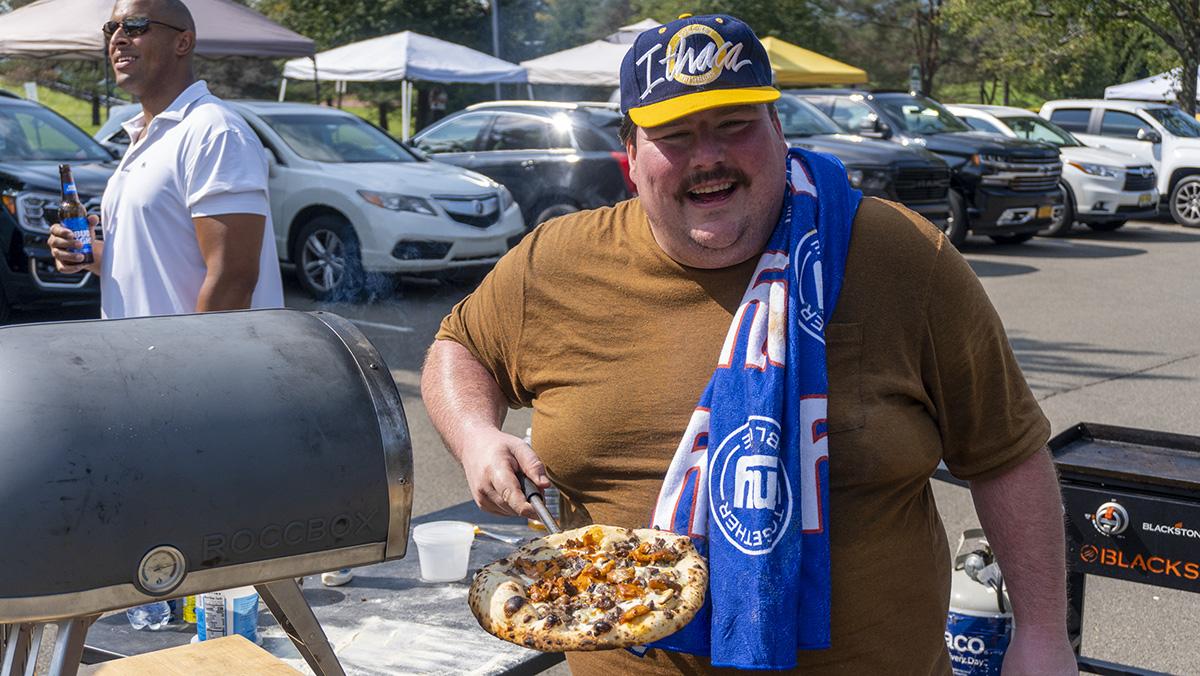 The Bombers remained persistent as the half neared its close, taking a 31–3 advantage against the Saxons. Senior wide receiver Michael Anderson caught a punt at the Ithaca College’s 42-yard line and brought the ball back to the endzone for a 58-yard touchdown return. Bahamdone’s successful PAT then added another point with 0:47 remaining in the quarter.

The South Hill squad capped off the half with an exclamation point, as junior defensive lineman Jason Green intercepted a pass by Saxons’ sophomore quarterback Zuke Smith and brought it back to the house for a 32-yard touchdown. Bahamonde remained perfect on his PAT attempts, giving the Bombers a 38–3 lead as the team went to the locker room.

The college made a switch at quarterback at the beginning of the third quarter, as Perry took over for Wingfield. Hayes also saw snaps at quarterback in the second half of the contest.

The Bombers found the endzone again with 2:10 remaining in the third quarter, as Hayes rushed into the right corner of the endzone for a touchdown. Bahamonde followed this with a successful extra point attempt to give the team a 45–3 advantage.

The South Hill squad’s offense refused to stay quiet in the fourth quarter, extending its lead to 52–3 against the Saxons. Perry crossed the goal line on a three-yard rush for a touchdown. Bahamonde’s seventh extra point of the ballgame was good, giving the team a 49-point lead with 6:14 left in the game.

This would stand as the final score, as neither team found the endzone during the rest of the contest. Toerper’s squad enters the bye week undefeated, outsourcing its opponents 127–17 through its first three games. The head coach said he is pleased with the state of his team through its first stretch of matchups.

“It’s right where we want to be,” Toerper said. “But we know going forward, nothing we’ve done in the first few games is going to matter. So, we just have to keep taking it one day at a time … and have a great week of working on our fundamentals and techniques.”

The Bombers will return to action at 1 p.m. Oct. 1, as the college will travel to take on Hobart College in Geneva, New York.