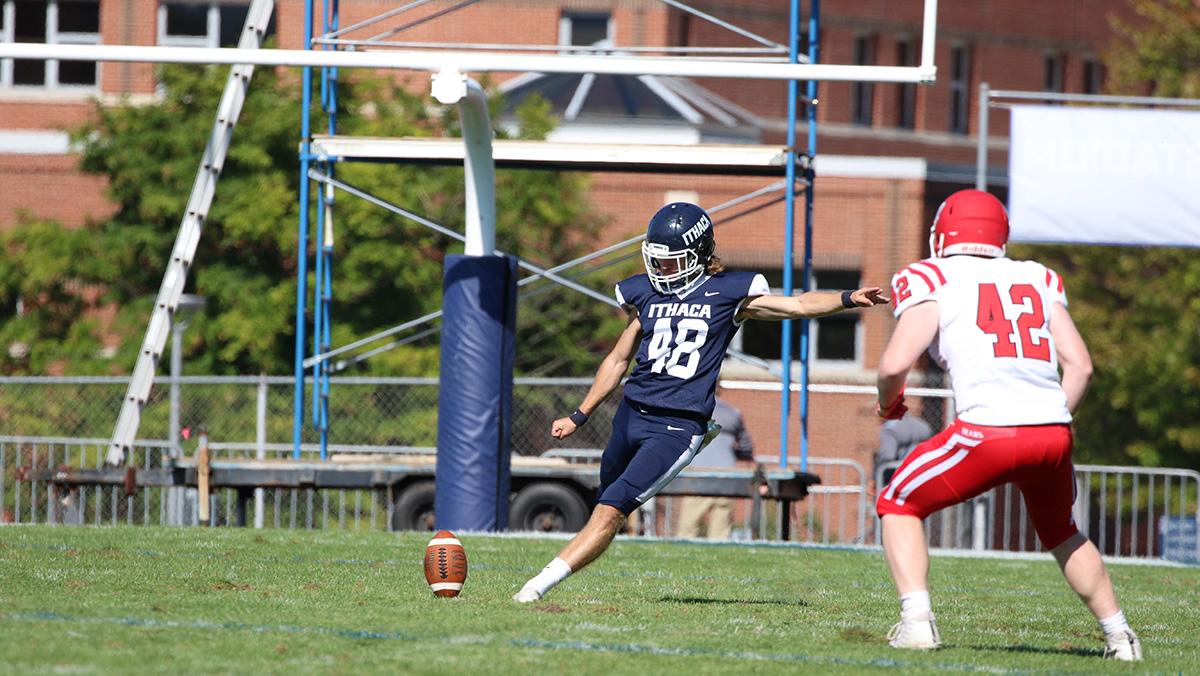 In 2019, junior football kicker Nick Bahamonde won the Liberty League Special Teams Player of the Year following a successful freshman campaign. However, after the 2020 season was canceled because of the COVID-19 pandemic, he packed up his bags, put a sleeping bag in his car and drove out west to spend a semester on the road.

After stepping away from the gridiron for a year in favor of a cross-country roadtrip, he was named the seventh best kicker in Division III football entering the 2021 season upon his return to the team. The rankings were released by The CFB Network, a popular social media page that covers all three levels of college football. Bahamonde was also named Liberty League Football Special Teams Player of the Week for his performance Sept. 4 in the football team’s 52-20 win over Bridgewater State University.

Bahamonde, who grew up surrounded by nature in Berryville, Virginia (the Appalachian region of the state), said that the idea of facing online classes helped him make his decision to take a leave of absence, but that he thinks he would have embarked on a similar trip eventually. He said the trip was something that he knew he needed to experience in his life.

“At some point I would have gone through what I went through in the last year,” Bahamonde said. “I feel like everyone has to go through that at some point. I know [I would have gone] eventually, I just don’t know if it would have happened in the same way if not for the pandemic.”

The COVID-19 pandemic caused Ithaca College to shift classes to remote instruction during the spring of Bahamonde’s freshman year. The college then made the decision to continue online courses through the Fall 2020 semester.

The college’s transition to remote learning prompted Bahamonde to enroll in a community college for Fall 2020, before packing his bags and driving to California in the first week of March 2021.

“I had a rough plan of places I wanted to go, but nothing too specific,” Bahamonde said. “But then I ended up ditching that plan about five days into the trip. So I literally just got into my car and I just drove around, met a bunch of people and explored wherever I wanted to.”

Bahamonde said he started with a four-day drive from his hometown to Southern California, where he spent a few days before driving up the coastline to Bend, Oregon. He said he did not love Bend, so he left after only a day to go back down the coast to Lake Tahoe and the Malibu area. Afterward, he cut back inland to Southern Utah, then Colorado before returning to Virginia the third week of April.

He also said he is very grateful for the time he spent learning life lessons, learning about himself and becoming a person that is almost unrecognizable from his freshman self, which would not have happened if he spent the year in school.

“I learned more in that year by myself than I’ve learned in school, probably ever,” Bahamonde said. “I can do algebra, but that doesn’t teach you how to talk to a stranger, or be a good person, or be a hard worker. I learned how to live my life.”

Bahamonde said that missing the 2020 season made him realize how tired he was of football. He said it was not that he did not love the sport, but no one knew him by anything other than the star kicker for the Bombers.

“I was like, this is all I do, this is all people know me for,” Bahamonde said. “I felt like I was just the kicker on the football team, and I want it to be more than that.”

He succeeded in that mission during his time out West, said Kaia Friedly, a student at Orange Coast College whom he met in California. Friedly said she was shocked when he told her that he was a football player.

“When he told me he played football in college, my first thought was ‘Are we thinking about the same kind of football?’” Friedly said. “He’s the polar opposite of what I would’ve expected.”

Though they only met in person once, Friedly said Bahamonde made a lasting impression on her, and they still talk every day.

“When we met, it was an instant click,” Friedly said. “We became such good friends on the first encounter because he’s such an amazing guy with such great ambitions. It felt almost like we got eloped.”

Fellow Bombers kicker and Junior Enzo Martelluci said he is not surprised that Bahamonde makes that type of impression on people. He describes his teammate as laid back, someone who gets along with everyone and as attacking each day with a smile. However, even though his personality may seem relaxed, Martelluci said Bahamonde did not take any days off in preparation for the 2021 season.

“To come right back to the field was just the willingness to play right when he got here,” Martelluci said. “I do believe he’s got the ability and quality of a [Division I], which is also why I believe he will be ranked first in Division III football after this season.”

Tom Biscardi, linebacker and special teams coach for the football team, said Bahamonde is a great person and teammate.

“He gets along with everyone, it’s not like he’s always off with the specialists, separate from the offense and defense,” Biscardi said. “He comes out there every day with a smile on his face and ready to go, and he performs at a high level.”

When he takes the field in important game situations, Bahamonde said his mentality and attitude help him stay focused, even in the hardest of situations.

Having that type of clear headspace is a technique Bahamonde said he has brought to football from his experiences in life. He said he is focused on living his 20s to the fullest so he has no regrets later in life.

“When you’re young, do the jobs and things you can’t do when you’re 45 and behind a desk,” Bahamonde said. “Some kids are going to intern at JPMorgan and I’m sure they’ll be making a lot of money, but they are not going to be as fulfilled as I am. I can guarantee you that.”

Friedly says that she can see how much the trip has changed Bahamonde for the better and that he seems like he found himself.

“He told me when we met that he was doing [the trip] to experience what it has to offer,” Friedly said. “He wanted to get a new outlook on life, and he says he did and that he feels a lot more confident in life now.”

Bahamonde also created digital content while he was traveling. Bahamonde put photos on his Instagram, @nhbaha, and videos on his YouTube channel. Friedly said she was very impressed by his creative eye and photography skills.

“He showed me that he was taking pictures of things like the Northern Lights,” Friedly said. “Everything I saw was insane.”

Even though he was tired of football a year ago, Bahamonde said this year has made him want to play football more than he ever has. He said that missing a full season was the best thing that could have happened to him.

“The year off made me reflect on why I play and why I want to keep playing,” Bahamonde said. “I’m more excited for the next two years of football than I’ve been for any year in the past, and I’m enjoying playing again.”

While most coaches might be worried about a player missing an entire year of working out, practicing and playing football, Biscardi said he is not worried in the slightest about how Bahamonde will reacclimate.

“Obviously it would’ve been awesome to have him here in the spring, but I know he’s taking care of himself off the field,” Biscardi said. “Right now he’s got the opportunity to explore and do some activities, and when he came back we knew he was gonna be ready to go. And he was.”

The junior said that he is ready for the upcoming season, but that he is not worried about trying to outperform expectations that might be on him after his successful first year. However, he has set a lofty goal for himself.

“No misses is always the expectation,” Bahamonde said. “[Freshman year], I missed my first-ever kick in college and then I did not miss again for 10 weeks. I hate missing.”