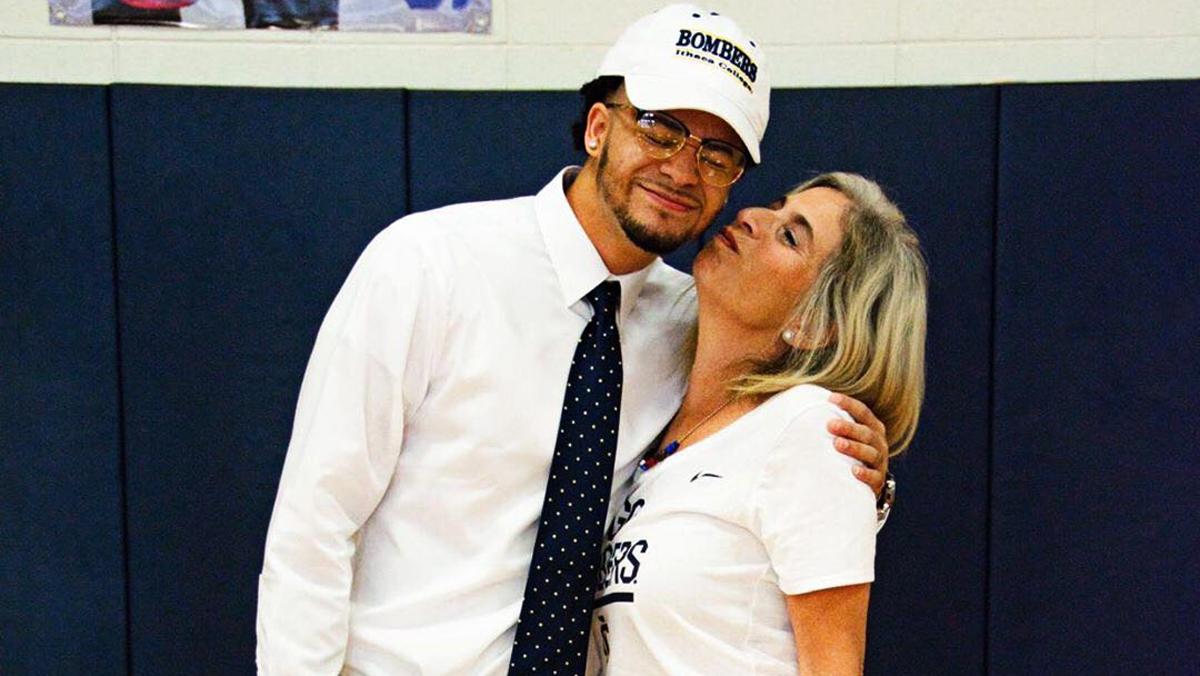 Photo courtesy of Daniel Hutchinson
Freshman football player Daniel Hutchinson and his mom have had a close relationship for as long as he can remember. The two shared an emotional goodbye when she dropped him off at Ithaca College.
By Lauren White — Assistant Sports Editor
Published: August 28, 2019

Like most students leaving for college, freshman football player Daniel Hutchinson said an emotional goodbye to his mom when he settled into his dorm on Ithaca College’s campus. However, unlike most freshmen, Hutchinson and his mother said goodbye with a personalized handshake and posted a video on Instagram that instantly went viral.

Hutchinson and his mom, who are from West Palm Beach, Florida, were featured on popular social media accounts like Oprah Magazine and House of Highlights, and Hutchinson’s original post received more than 31,000 likes on Instagram. His Instagram following also increased from approximately 3,000 followers to more than 33,000.

Assistant Sports Editor Lauren White sat down with Hutchinson to discuss the viral video, his transition to college and his relationship with his mother.

Lauren White: Why did you decide to come to Ithaca?

Daniel Hutchinson: That’s a very long story, to be honest. I played football throughout high school and during my recruiting process I got recruited by some big schools, but then my senior year I tore my ACL, and then all of those big schools went away. Ithaca really came out of nowhere and was like, “We want to give you opportunity. You seem like a good kid, and we don’t want to see you fall through the cracks.” They gave me the opportunity, so I said, “Thank you,” and I’m here now.

LW: What is it like going to college so far away from home?

DH: It’s actually very hard. Growing up, me and my whole family, we were all so close with my mom. I’m the youngest and last one, so me and my mom had the most one-on-one time, and it’s the first time that she’s alone because my father’s not in the picture. So, I’m kind of worried about her, but I have faith that she’s going to be all right and that she’s in great hands with the man up above.

LW: Why was it so hard to leave your mom?

DH: I’m the youngest and me and my mom had the most one-on-one time. It was so hard to leave her because it’s kind of just been me and her a lot. I was her rock through the domestic violence, through the poverty, things like that. And then she was my rock when I was going through my ACL tear and I went through my depression and things like that. And it’s just like we created that type of bond that’s like it really can’t be broken. Going so far away, it’s just going to be so hard. I’m kinda scared we’re going to lose that bond, but it’s so strong.

LW: Tell me about your handshake.

DH: We made that a long time ago. We did it before every single football game. I just came up to my mom and I was like, “Mom, we need a handshake. It’s going to be so cool just trust it.” So we made a handshake, and we throw up the “I love you” sign because my mom is a sign language interpreter, and at any point in the game that we can’t do the handshake we just throw up the “I love you” sign and it’s just like, “I see you mom” type of thing.

LW: How does it feel to go viral?

DH: Oh man, it’s amazing. I got to give God the glory, though, for it all. But no, I feel like I’m on cloud nine. Just like everybody’s talking to me last night, and a group of people came up and were like, “Let’s take a picture.” It’s crazy.

DH: The views. I love the views so much. It’s just so peaceful, tranquil. I just… I love that.

LW: How do you like being on the football team?

DH: Me, personally, I’m a guy that likes to talk to everybody. So my first day, it was like I wasn’t the only guy that was talking to everybody because the team welcomed me in so well. I just felt so welcomed. I was brought into a family, and it felt like I was there for five years already. Playing football brings you a lot of attention, and I feel like now with where I am, I cannot only inspire and impact the football team but as well as the community of Ithaca College.

LW: What are you looking forward to this year?

DH: Having a great football season, first. I want to get healthy. I want to be ready to play instead of just being clear. And, honestly, I want to impact as many people as I possibly can. I’m going to aspire to inspire, and we’re going to see where that takes me, and that’s what I’m really looking forward to the most.

The Ithaca College football team was questioned if they were going to perform well, but a successful season proves they have a bright future.