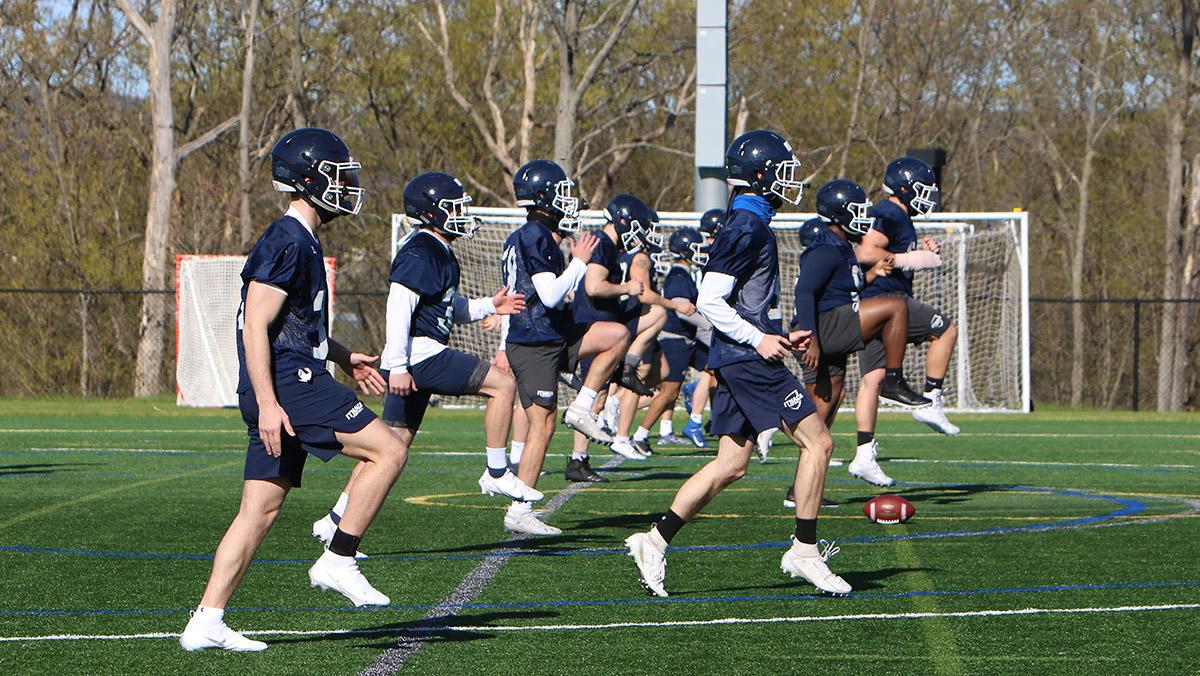 Ana Maniaci McGough/The Ithacan
The Ithaca College football team continued its preparation for the 2021 season with its spring game April 30. The team has not played since going 8-3 in 2019.
By Tommy Mumau — Assistant sports editor
Published: May 6, 2021

The Ithaca College football team returned to action in front of a crowd of Bombers fans in an intrasquad spring game April 30 under the lights at Higgins Stadium.

The scrimmage was the first game action for the squad since it competed in the ECAC Asa S. Bushnell Bowl against Washington & Jefferson on Nov. 23, 2019. The team’s 2020 season was canceled due to the COVID-19 pandemic. The contest felt similar to a late-autumn matchup as the Bombers played through rain and cool temperatures. The team did not keep score or divide the game into quarters, but simulated in-game situations by having the Bombers’ offense and defense compete against each other.

Sophomore quarterback, A.J. Wingfield said he enjoyed getting back on the field and showcasing what the team had worked on both offensively and defensively over the course of its practices this semester.

“We had a ton of butterflies, but it was so awesome that all of our hard work from the spring finally got to pay off tonight,” Wingfield said.

Head Coach, Dan Swanstrom said his squad was grateful for the chance to get back on the gridiron after the cancellation of the 2020 season.

“I think it meant everything to them,” Swanstrom said. “The culmination of the work that we put in, the discipline, the standards and expectations that were put on them for the semester, for it all to come together and for us to get to this point, I think it meant a lot to them.”

The game operated with the offensive and defensive units alternating players after each drive, allowing the coaching staff to see its players in game action. Swanstrom said the staff is still getting familiar with the new players on the team after the 2020 season was canceled.

“We have a lot of unproven players,” Swanstrom said. “There’s not a lot of guys that we know a lot about in game situations.”

Three quarterbacks took snaps for the Bombers in the contest, where sophomores Wingfield, Max Perry and Conner Hayes each saw playing time. Wingfield said he was proud of the team’s offensive effort.

“I think we all had a good night,” Wingfield said. “Obviously the weather was tough, but I was happy with what we produced.”

The defense also delivered a dominant performance, forcing several turnovers and managing to stop the offense at the line of scrimmage on multiple plays. Swanstrom said he was particularly impressed by junior linebacker Matt DeSimpliciis, who recorded a pair of interceptions in the game. Swanstrom said he was pleased with the team’s defensive effort, especially because the squad will rely heavily on the unit in the upcoming season.

“I think the defense played really well, especially getting turnovers,” Swanstrom said. “It’s kind of what you expect from the Bombers. We’re going to be a defensive program, and that’s how they should play.”

Junior defensive back Michael Roumes said that the defense’s strong showing was a result of good preparation by the coaching staff.

“[The coaching staff] did a great job preparing us, and to be able to go out there and execute through the first group to the last group, everybody did a great job,” Roumes said. “It was a lot of fun to see everybody compete.”

The program is nearing the end of training for the semester, but the team will return in August for its first regular season in nearly two years. Wingfield said he was happy with the team’s progress during the spring and looks forward to what the Bombers have in store for 2021.

“I’m super excited,” Wingfield said. “I think this spring was a great step forward. We’ve got a ton of talent [and] a ton of speed. We’re really together, we’re a really good group. I think the sky’s the limit for us.”

Swanstrom said he has enjoyed coaching the team during the spring semester. He said that he believes the team’s strong work ethic will help it reach its goals in the upcoming campaign.

“As a group, I enjoy being around them,” Swanstrom said. “They’re really fun to coach and a hard-working group. Our best players are our hardest workers, and when that’s what you’ve got, you at least have a chance.”