Former Bomber returns to the sidelines as assistant coach 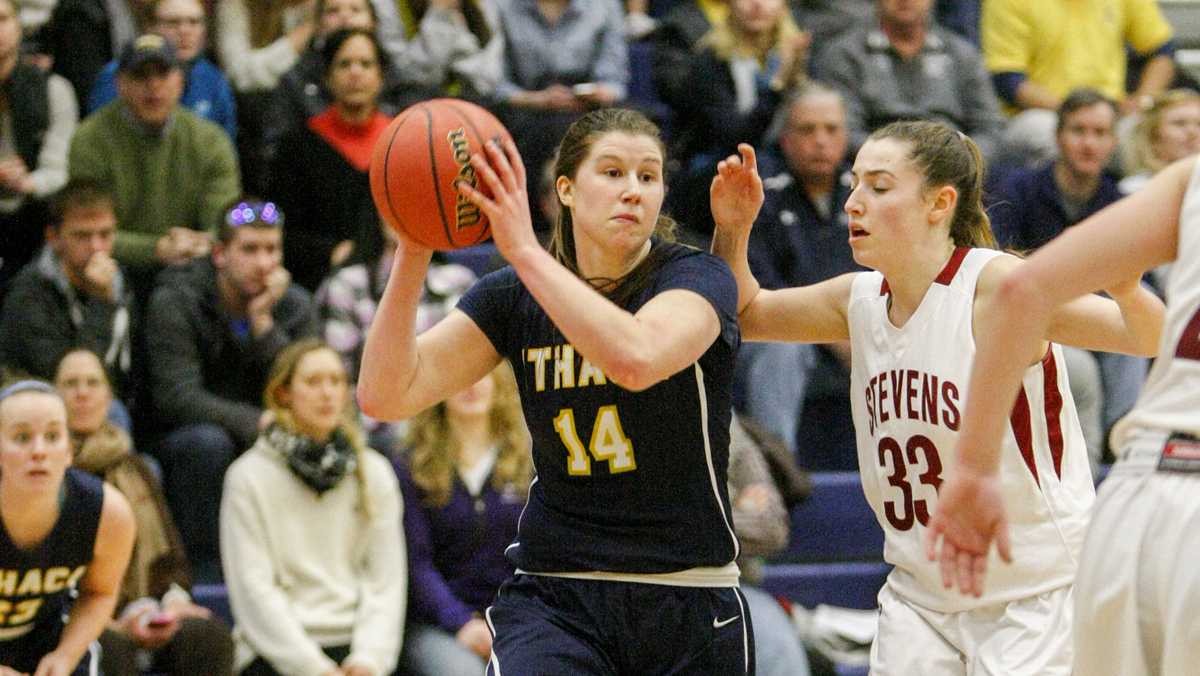 The Ithaca College women’s basketball team will be seeing a familiar face on the sidelines this season.

Tierney started her college basketball career at Bryant University before transferring to Ithaca College. She played an important role on the Bombers’ 2014 team and helped lead it to the program’s first Elite 8 appearance in the NCAA tournament. During her senior season, she became the program’s fifth Women’s Basketball Coaches Association All-American and set a single-season record for 3-pointers with 72, which is currently still the record.

Staff Writer Matt Vander Plaat spoke with Tierney about her prior experience, her transition to the team and her expectations.

Matt Vander Plaat: How does it feel to be a part of the women’s basketball program again?

Mary Kate Tierney: I’m thrilled to be back, to be a part of this program just in a different capacity. I was fortunate enough to have a great experience here playing. My main goal in coming back is to just to provide a very positive experience for those student-athletes moving forward.

MVP: How will your prior experience as a player here at the college help the team?

MKT: Well, it’s awesome. I played for Coach [Dan] Raymond for two years, and it’s such an easy transition moving forward right into the season, so that’s been awesome. And I think, having played here, we were successful when I was a player here, and I think that gives me confidence moving forward. Being a part of this team and knowing that if I give my very best, I can help this team achieve goals that they have for themselves.

MVP: Can you talk about your experience at NYU as well as Dickinson?

MKT: So at Dickinson, I was hired right out of college when I graduated from here. And I was hired by the then-assistant coach that I played for at Ithaca. She got the head coaching job at Dickinson College, and she was nice enough to offer me her assistant position, and it was an awesome two years for me. She really taught me the fundamentals and the basics of coaching, and I’m so grateful to her to this day. We just went through taking over a program, and I had a lot of unique experiences there that I was able to use and kind of develop my own coaching philosophy. At NYU, I was so fortunate to work for an awesome boss, Lauren Hall-Gregory. We were faced with some adversity — we didn’t actually have a gym for the past two years, which was kind of nuts — but I will say my players were awesome. They were unique. NYU does draw this unique individual that wants a city experience. So I really enjoyed my time there as a part of the UAA, which is one of the best conferences in the country at Division III. We got to fly to conference games, so it was really a unique experience in that regard, and I learned a lot about professionalism and how to carry yourself. That was really huge, and now I am able to come back here to Ithaca having those two experiences.

MVP: How would you describe the women on the team and the coaching staff as a whole?

MKT: I think it is an extremely talented competitive group that has certain goals, and they might be lofty goals, but they are willing to work to achieve these goals. I think that is what I’ve learned fundamentally so far. If you don’t have that hard work and competitiveness, you’re not going to be the team you want to be. Working for Coach [Raymond], Coach and I are a little different, which is what you want in a staff. He’s a little more detail oriented and thinks about the next step, and I’m much more in the moment. I’m positive, enthusiastic and energetic right in the moment. So I thought we balanced each other out well in the first day of practice, and working for him is something that I wanted to do since I left here. So I’m really excited about the opportunity.

MVP: How do you keep the team focused on the goals for the season?

MKT: I think you always have to have the expectations in the back of your mind. I heard someone say the other day, I think it was Matt Ryan for the Falcons, he said, “You can only win one game a week,” and I think that has got to be the mindset — that you can only win one game, and that’s the next one. So keeping that focus throughout the season will be a challenge, but it has to be the grounding nature. It’s a long season, and it’s something that, if done right, it is really fun and exciting, but you can’t lose sight of the little things because the little things is what makes a team excellent.

MVP: What are your expectations for the season — for yourself as a coach and for the team as a whole?

MKT: Don’t screw it up on my end. I transferred here, so I was at Division I Bryant University for a year and a half, but the thing that I received here was the people and the support and the positivity I got once I got here — it really changed my life. So I think that’s what I want to give back. Yes, I want to win, I’m competitive and I want the very best for them in that regard, but I also want to be there for them. I want to be supportive and positive every day no matter what the circumstances are.