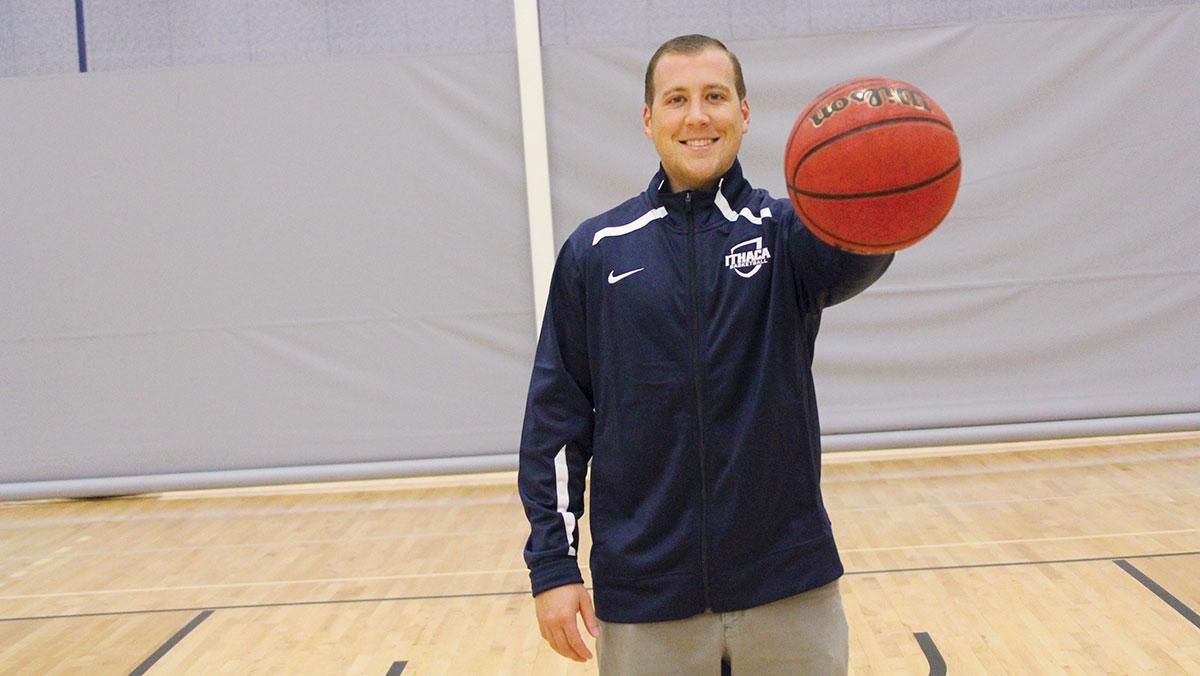 Caitie Ihrig/The Ithacan
Sean Burton poses in Ben Light Gymnasium with a basketball, as he was hired as assistant men's basketball coach in September. Burton played for the program from 2005-09, and was a two-time All-American and captain for the Bombers.
By Vinica Weiss — Assistant Sports Editor
Published: October 19, 2015

Sean Burton ’09 was hired as the assistant men’s basketball coach by the athletics department in September. As one of the most instrumental players in the men’s basketball program from 2005–09, Burton was a two-time All-American and a captain for the Bombers his junior and senior years. His impressive mark includes ranking third all-time in scoring with 1,736 career points, second in assists with 556 and third in 3-pointers with 261.

Following his college career, Burton went on to play professionally in the Iceland Express Basketball League and coach a youth team while overseas. After two years playing professionally, he began his college coaching career at fellow Empire 8 school Utica College in 2011, where he stayed until 2013. Most recently, Burton served as head assistant coach at Babson College for two years where he helped guide the Beavers to a 29–3 overall record in 2014, a program best.

Assistant Sports Editor Vinica Weiss spoke with Burton about his previous coaching experience, his professional playing career and how he is helping the basketball squad prepare for the upcoming season.

Vinica Weiss: When and how did you become interested in the position at your alma mater?

Sean Burton: Four years ago when I started coaching in college, I started at Utica College, and obviously they’re in the Empire 8, so once I got into coaching and knew it was what I wanted to do as a career, the goal was to get back here. So I had a five-year plan where I wanted to get back here in some way helping the team, and four years later, I wounded up back this way. I’ve always been in close contact with Coach [Jim] Mullins since I graduated. He’s a great guy, a great coach, a mentor, so we’ve stayed in touch since. And Jon Tanous, who was here before me, he’s at Penn State-Abington now, and he didn’t find out about the job until early August of this year, so once he accepted it, that’s when I found out about it and immediately applied.

VW: When you were a student-athlete, was it always your goal to become a college coach?

SB: It’s interesting. My path was a little different. It was always around basketball, but I was so focused on continuing my playing career in college, so I graduated in ’09, and then I went and played in Iceland for two years, and I did not know what I wanted to do professionally outside of that until I started coaching the youth Iceland team. They were 15- and 16-year-olds, and that’s when I really developed a passion for it, and my second year over there is when I kind of had the idea that this could be a good career.

VW: What was it like playing internationally in the Iceland Express Basketball League?

SB: It was good. It was different. Different rules, obviously. The shot clock, which is now 30 here, was 24 seconds there, so it’s a faster pace, higher offensive pace. Obviously, everyone’s a little bit bigger, more physical, which is what you see transitioning from high school to college, it’s another transition from college to pro, but it comes down to you just playing basketball. It’s a game.

VW: How will you draw on your previous coaching experience at Babson to help the Bombers this season?

SB: They’re very similar schools academically, so recruiting wise, I can recruit similar student-athletes that want to go to a high-academic school, and that’s a big priority. We had a great run [at Babson], and we won a lot of games. We went to the Final Four last year, so just the experience of playing in those big games and having a hand in winning and getting that far, I think will help me here.

VW: Does your experience playing for the Bombers help you relate to the current players that you are coaching now, and how so?

SB: Absolutely. I’ve been through everything that they’re either going to be going through or have already. I’ve been on the same campus, played for the same coach, in the same system or similar system. So I think the fact that I have not only gone through it at this level, but the same exact school and for the same coach and athletic department, I think it will help.

VW: What are the main goals you and Coach Mullins have for the basketball team this season?

SB: Stay healthy is always No. 1. You want your student-athletes to be healthy, playing the entire season. Just changing the culture here — whether it’s off the court, on the court — our whole motto this year is team, teammates, self. We want guys putting the team first, and their teammates second, and [themselves] last. We’re trying to change that culture, and hopefully by doing that, it will lead to wins.

VW: What are you most excited about for the upcoming season?

SB: Honestly just being back here, being back with the Ithaca family and community and working with these guys. It’s an awesome group of guys, and obviously Coach Mullins. I had an awesome experience with him, so it’s great to be back working and learning with him and from him, and I’m just excited with the group of guys that we have.