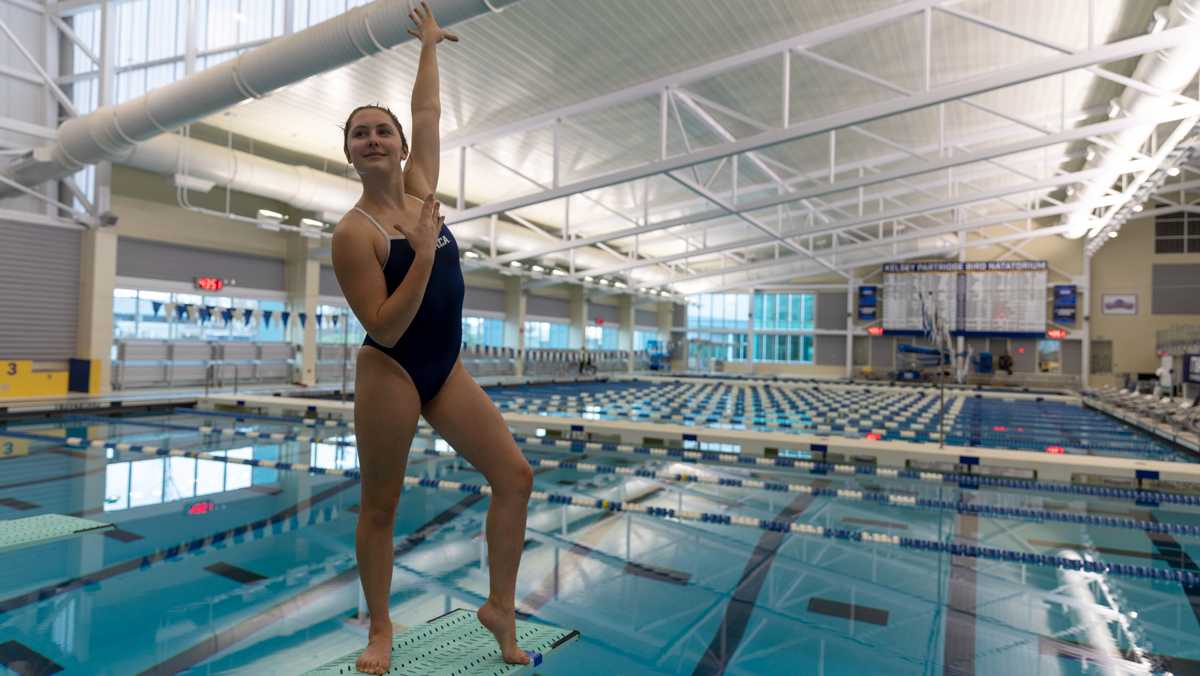 During her freshman year at Ithaca College, Ava Lowell was spending most of her time flipping around bars and tumbling across a spring floor for the Bombers gymnastics team. Now, at the start of her sophomore year, Lowell is putting in hours every day in the pool as a new member of the women’s diving team.

Lowell is not alone in utilizing the skills she learned from gymnastics to switch to a new sport. All five of the current pole vaulters on the women’s track and field team and three out of five divers on the women’s swim team competed in gymnastics for at least 10 years before leaving the sport and beginning their careers in brand-new events. Both  sports — pole vaulting and diving — require similar strength, spatial and body awareness, and mental toughness that gymnastics instills in athletes, similarities that make for a natural transition between the sports.

This trend is not a new one, either. Graduate student Katherine Pitman competed for the college’s gymnastics team during her freshman year but was cut as a sophomore. She went on to win three national championships in pole vault and currently holds the Division III national record at 4.31 meters. Lindsay Suddaby and Alyssa Wishart, graduate students and former divers, also came from gymnastics backgrounds. The pair qualified for nationals last season and placed sixth and 22nd respectively.

Several of the former gymnasts who compete in sports at the college listed physical inabilities to compete in high-level athletics as their reasons for retiring from gymnastics before they came to the college. Graduate-student diver Anna Belson said that during high school, she dealt with a broken wrist, a concussion and ACL surgery that prevented her from moving further in the sport. Sophomore pole vaulters Julia Nomberg and Juliann Terry, along with freshman pole vaulter Alex McKenzie, noted the chronic pains that contributed to the end of their gymnastics careers. Nomberg, who left gymnastics in her sophomore year of high school, also suffered from a broken toe and stress fractures in her shins.

Hummel also noted that gymnasts enter the sport at a very young age, a circumstance that can lead to their bodies deteriorating as they progress in the sport.

“They start at 3 or 4 years old, and once they get to college, they’ve been doing gymnastics for 14 or 15 years,” he said. “That cumulative effect really takes its toll on their bodies.”

The eight former gymnasts involved in pole vault and diving for the Blue and Gold began gymnastics at an average age of 4 1/2 years old. The youngest was freshman pole vaulter Meghan Matheny, who began when she was only 1 1/2 years old.

Athletes also named the mental strain that they experienced in gymnastics as a motivator to leave the sport. Lowell described a feeling of “burning out” and her desire to experience something new as the reasons for retiring from gymnastics and switching to diving.

“I knew I was done around 11th grade,” she said. “My mom and my coach kept pushing me to get to college and telling me it would be really fun, and it was fun. But I got to the point where gymnastics was taking up so much of life, and I realized I had never tried anything else.”

“They deal with fear every day,” Suddaby said. “They can’t make mistakes. Whether they’re competing or training, they have to be on because if not, it could physically cost them.”

Matheny, who transitioned to pole vault in eighth grade, said the high-pressure environment of gymnastics contributed to her decision to retire. 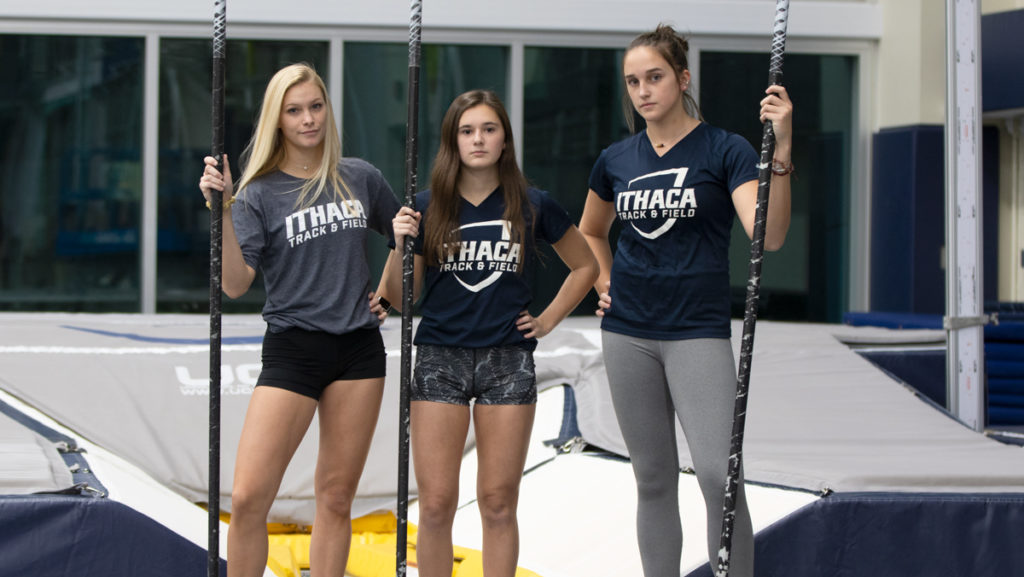 “I consider myself a perfectionist, and in gymnastics, you’re always striving for a perfect 10,” she said. “The point is to be perfect, so every time I wasn’t, I really got in my head about it.”

Matheny said one of the biggest reasons why she settled on pole vault as her new sport was that it offered a change from that rigid environment. She said that she dreaded meets in gymnastics but that she now finds competing one of her favorite parts of vaulting.

“My knees used to shake before I went on beam,” she said. “[Pole vault] is just something that I love so much more. I’ve finally found what I’m actually passionate about.”

The athletes who chose to transition to diving were looking to experience the same sensation they got from gymnastics in a different setting. Like gymnastics, diving requires athletes to mentally overcome competing at heights and performing dangerous skills in the air. Lowell explained that this fear factor is what drew her to diving after she left the gymnastics team.

“I’m kind of an adrenaline junkie and really like that falling feeling, so diving seemed like the best option for me,” Lowell said.

Sophomore diver Jocelyn Pawcio, who had no diving experience before college, said the strong spatial and body awareness that she developed from gymnastics also serves her well on the springboards.

“Being able to understand that you can use equipment to amplify your skills and having done flips and twists before makes the transition way easier,” Pawcio said. “We have a huge advantage there.”

Sophomore vaulter Emily Carey said the physical strength required of her as a gymnast made her switch to pole vault smoother.

“Having the strength really helped me transition,” said Carey. “Having that upper body strength already was huge, especially in the weight room.”

Many former gymnasts said they experienced a technical learning curve when they changed sports as many of them came into collegiate competition with no prior experience.

For some of the divers, the patience the sport requires was a difficult adjustment.

“We know how to twist, but it’s the little things like waiting in the air before you start the twist,” Lowell said. “In gymnastics, when you finish a twist, you hit the floor, and it’s going to stop you, but in diving, it’s being able to stop yourself.

Though she had to leave the sport she had put so many years into at the start of this season, Lowell described finding a new home with her teammates on the diving team.

“I was definitely nervous to leave the gymnastics team, but they are so welcoming and understanding,” she said. “It doesn’t matter what you do. You can fail a dive, you can smack hard or miss a practice, and they’ll always be there.”

Carey reiterated these sentiments and said she feels constantly supported by her close-knit team despite competing as an individual.

“My best friends are all on this team,” she said. “I love that we all grow together, and it’s amazing seeing everyone else accomplish their goals and achieve as a group.”

Pawcio said the camaraderie she has experienced has had the biggest impact on her since becoming a part of the diving team.

“I just feel so accepted and loved by everyone here, which is really special,” Pawcio said. “I don’t go throughout my day dreading practice; it’s always something I enjoy and that’s what sports should be.”