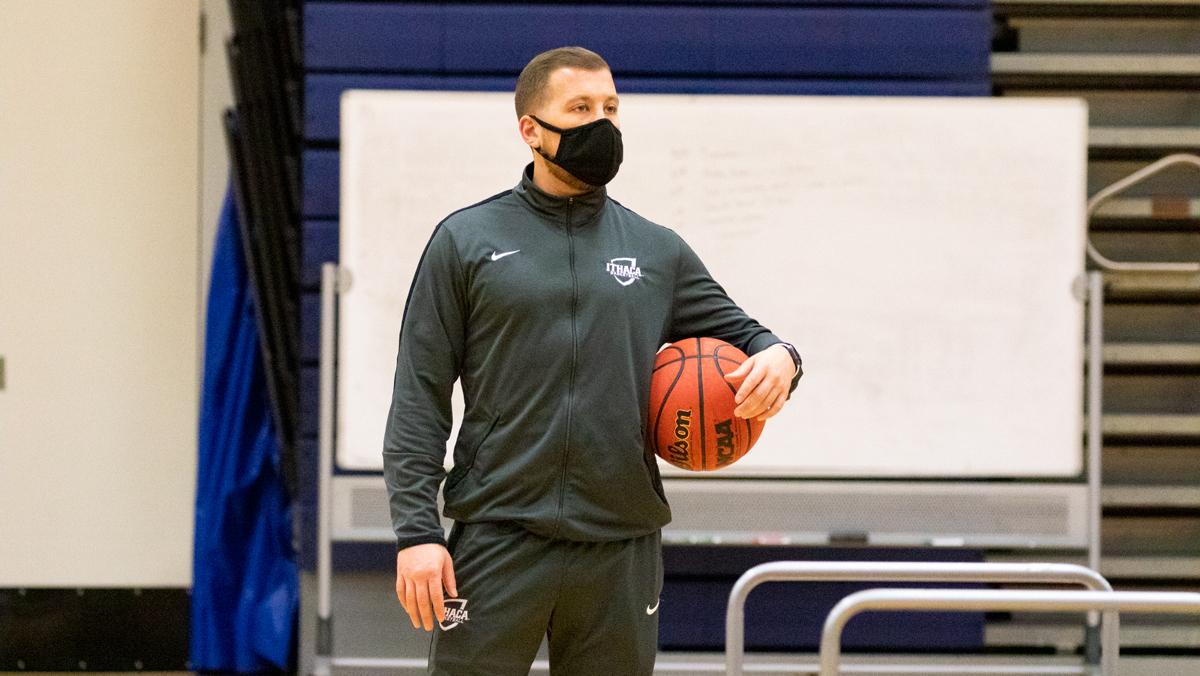 Following a historic run to end the 2019–20 season, Jim Mullins, Ithaca College men’s basketball head coach, announced his retirement. When the team looked to replace Mullins, it turned to one of the best players in program history.

Sean Burton ’09, head men’s basketball coach, played four years as a Bomber. He ended his career at the top of program statistical categories, like third in points, second in assists and first in free–throw percentage. Burton also took home two Empire 8 Player of the Year awards and was the only Bomber to be named to three All-American teams. Burton played basketball for two years in Iceland before returning to the United States to coach. He started as an assistant coach at Babson College, but once the phone rang with an offer from Ithaca College in 2015, Burton knew he was going to come back to his alma mater.

“I was in a good situation [at Babson College], but my pride for Ithaca and love for the program drew me back,” Burton said. “Once the job opened, I knew I couldn’t pass it up.”

Burton said that Mullins did not give any indication during the 2019–20 season that it would be his last, but Mullins said that a combination of winning the Liberty League in 2020 and health complications ultimately pushed him to step away. Burton went through the same hiring process as the other candidates who were considered for the position, and it was announced to the players during a team Zoom meeting after the 2019–20 season what the coaching staff would look like for the 2020–21 season.

“In my mind, he’s been a co-head coach with me for the last several years,” Mullins said. “Sometimes, I think in athletics, there may be a tendency to look outside [for hiring]. But the grass isn’t always greener on the other side. Sometimes you just have the best person available already in your organization.

Currently, Burton’s former position has not been filled, but the team has two student assistant coaches — senior David Aiello and first-year graduate student Sebastian Alderete, a former player. Burton said his focus is on coaching, not hiring another assistant coach.

It has been a long wait for Burton’s first practices as the head coach of the team, but the team is making the most of every practice together so far.

“We’re fortunate enough that Ithaca College has decided to allow athletics back on campus,” Burton said. “We’re following all of the COVID protocols to make sure we’re safe and healthy throughout these workouts. It’s unbelievable to be back in person, working on our skill set, our camaraderie and chemistry as a team moving into next year.”

One of the aspects Burton values the most about being a head coach is being with his team daily. Since early January, the team has broken up into two groups running non-contact drills. The team hopes to be able to run contact drills, like small three-on-three scrimmages, as soon as this month.

“We always tell the guys to control what we can control, and that’s what we’re doing right now,” Burton said. “We obviously missed being with the guys all fall. The best part of the job for me is that day-to-day interaction with the players. We stayed in great contact and communication with each other via Zoom, and now we’re excited to be back together in person on the court.”

It was a teamwide effort to stay in contact during the remote fall semester, and part of that burden fell on the team’s two captains, senior Cooper Macklin and junior Skylar Sinon. Burton implemented a buddy system to have his players check on each other daily to stay in communication and make sure their workouts were completed. Sinon said Burton’s familiarity with the team assisted in the position change.

“I think with Burton, he is definitely more of a vocal coach and hands on,” Sinon said. “[Mullins] would be in practice but be kind of quiet and wait to say something. … They’re both great coaches, just in their own way.”

Sophomore Liam Spellman said that he has been eager to get back to playing and that it felt like Burton began his transition to head coach last year.

“For last year, Burton was a lot like our head coach,” Spellman said. “Mullins had given him a lot of responsibility, so it wasn’t a huge transition. He appreciates the player–coach relationship. Mullins had that, but I think Burton’s able to appreciate that more because he was actually a player not so long ago.”

Part of why the team was excited about Burton’s promotion was him being a player’s coach. His experience playing and knowing what the players like has resonated with the team, Spellman said. Burton approaches every practice with a general plan of what he wants to focus on, but he leaves some leeway for his players to decide what they want to work on.

Burton has placed an emphasis on shooting as well as footwork, ball handling and defensive rotations. With the canceled season, Burton wants the team to improve with every practice. Burton said the team strives to be the best shooting team in the conference, but next season they have their sights set beyond the Liberty League.

“We have our goals of winning the [Liberty] League again, defending our title and winning the regular season,” Burton said. “We’ve been able to lead the league in almost every offensive stat, and we want to continue to do that, just more so on a national level and be top 10 or five in a lot of offensive categories. … Our goal is to be the most disciplined team, to hold each other accountable.”